Notes on a very tricky consultation or maybe just an illustration as to how you can’t satisfy all of the people all the time. 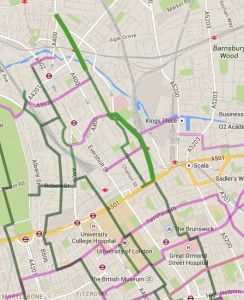 This autumn, Camden council consulted on the northern and southern extensions of Royal College Street – shown with thick green lines on the extract from the map of Central London Grid routes.

These two new routes, followed by northbound contraflow cycling on Midland Road and a two-way crossing over Euston Road into Judd Street would provide a north-south route from Kentish Town to Holborn. There is also potential to link with the quiet route to Gospel Oak on Castlehaven and Grafton Roads.

But getting agreement on the northern extension has been far from simple:

The decision was made by Cllr Phil Jones (Cabinet Member for Regeneration, Transport and Planning) at a public meeting on Tuesday 16th December.  Representatives of local businesses and residents groups made five separate deputation statements, their main point being that southbound cycles should follow the motors down St Pancras Way.

Mustafa Arif (trustee of LCC) made the following statement on behalf of London Cycling Campaign.

Camden has played a leading role in developing cycling facilities in London for more than a decade.  More recently the Royal College Street scheme has been highlighted by the Mayor’s office. In this year’s council elections, over 70% of elected councillors in Camden pledged to support LCC’s Space for Cycling Campaign. As a new political consensus settles across London, on making provision for cycling and cyclists of all abilities, so we hope that Camden will maintain and extend its historic leadership.

A viable ‘Central London Cycling Grid’ must consist of high-quality, high-volume N-S and E-W cycle routes that form a coherent, integrated coarse-grained network. Royal College Street is one of the essential N-S links – and is one of the few that can viably be completed to the required standard in the current Mayoral term. Funding is not guaranteed after the current Mayoral term ends, so it is essential for Camden, and London as a whole, to secure timely implementation of this scheme.

This link will for the first time enable travel in safe, low-traffic conditions by bicycle from Kentish Town and Gospel Oak to Bloomsbury and many surrounding districts – key residential and work areas as well as London’s primary academic quarter. It will open up local journeys as well as through journeys across Central London to a wider range of ordinary people cycling.

The completed Royal College Street route is therefore an essential requirement for achieving a substantial modal shift to cycling. Whilst there are aspects of the plans that can be improved – and we hope to work with Officers on this – it should not prevent the realisation of this scheme before May 2016.

John Chamberlain made the following statement on behalf of Camden Cycling Campaign:

We strongly support the scheme. It has strategic significance as part of the planned London Cycle Grid and builds on the success of the cycle route further south.

We want to attract those who do not yet cycle in Central London because they are afraid to share road space on busy roads and across major junctions. This scheme has the potential to achieve that by helping people cycle into the centre from Kentish Town and beyond.

Statistics on the southern part of Royal College Street show:

Strong increase of cyclists especially in northbound direction
Significant reduction in collisions (from 5 in 10 months to zero in the same period afterwards)
Significant reduction in traffic speed (e.g. from an average of 27 mph to 21 mph)
Southbound use of the RCS cycle facility is currently deterred by need to use St Pancras Way which is indirect and perceived as dangerous by many cyclists.

This scheme gives a more direct route and avoids the difficult manoeuvre where cyclists have to cross to the off-side of St Pancras Way. It includes separation of cycle and motor traffic at the crossing of Camden Road, an essential measure to make the route attractive to less confident cyclists and a first for Camden and probably London.

The scheme will change the nature of the street and make it quieter and safer for all users.
We are concerned that the details are in danger of being compromised by suggested changes to track widths and junction layouts but hope these can be addressed later.

Well, we were happy…

We were very pleased when Cllr Phil Jones said that he intended to sign off the consultation, considering all the responses received and the Camden Council Policy to improve cycle routes, air quality and safety of cyclists and pedestrians. So we @camdencyclists tweeted:

But we were disappointed that the only follow up from cyclists was a series of dissenting tweets, for example:

Does signed off version of the Northern Extension of Royal College Street still contain the dangerous merge at  junction?

And stronger, more bullying versions of the same thing directed at both us and Phil Jones. The design of the junction of Royal College Street and St Pancras Way has been discussed extensively and we do support a sensibly modified version of the design in the original consultation.

Getting local businesses on board

We are planning to try to make contacts with some of the local businesses so as to help them to understand that people who go shopping on bikes stop and buy things more often than those using motor transport. We need some help on this, so please get in touch with Angela
send email to Angela if you have ideas for how to do this.