Cobden Junction – a protected junction for cycling that never was

August 2015, construction virtually finished – a disaster following our disappointment when the “hold the left” was dropped.

This page chronicles the unhappy saga of a junction project for which we had high hopes after the statutory consultation and Camden’s improved design that followed our comments and those of others in LCC. The consultation was in 2013 and the project has now reached virtual completion (August 2015) with a design that is far from safe or pleasant to cycle through.

September 2015 – the mayor refuses to review it

We asked our very helpful GLA Assembly Member Andrew Dismore to raise this formally with the Mayor. Below is the still unsatisfactory outcome:

Cobden Junction is the name given to the junction just in front of Mornington Crescent Tube station. In 2013 LB Camden was awarded funding by the GLA under the Mayor’s Regeneration Fund for a major scheme to increase the usable pedestrian space and simplify the roads at this busy junction. Camden’s designers came forward with a much-improved revised design that exploited a recently-devised signalling scheme (‘Hold the Left Turn’) to ensure that cyclists were entirely protected from interactions with left-turning vehicles (as outlined in the new London Cycling Design Standards, Section 5.4.5). The full design for Cobden Junction was duly modelled by TfL’s network assurance section and was deemed to produce acceptable traffic flows. However at a late stage  TfL’s traffic signal engineering section vetoed the design and  reverted  to the original pre-consultation design with only very minimal changes and implementation work went ahead. The construction is very close to completion and the risk of serious injuries or fatalities to cyclists is substantial.  Will you now explain why the scheme was vetoed and take  remedial action to make the junction safe for cyclists?

response from the Mayor

The improvement scheme at Cobden junction is nearing completion and will deliver significant benefits to vulnerable road users and urban realm, leading to the much needed regeneration of Camden High Street and the associated benefits for jobs and future inward investment.

Suggested additional improvements to the cycle provision were put forward by campaigners but after careful consideration by both TfL and the London Borough of Camden these have proved to be unviable. The final design that is now being implemented has passed through a rigorous independent road safety audit process and will be closely monitored by TfL and LB Camden post-completion to identify if any remedial action is required.

August 2015 – an unsafe and unpleasant outcome

These photos taken from just in front of Mornington Crescent tube station illustrate the finished junction:

Crowndale Road and Eversholt Street. Crowndale has 3 lanes of motor traffic with a gate for entering the ASL sandwiched between two of them. This diagram illustrates the four stages of signal settings that control the flow of traffic through the finished junction:

In the case that cycles were provided with any cycle-specific infrastructure we would show their movements in green. But since this is not the case, cycles are included in”general traffic” shown in blue.

Issues at each junction The 7.5m ASL box has three approach lanes with “gates” into the left ‘left turn only’ lane and central lane – see the photo on the left.

We assume that cycles not turning into Eversholt Street are expected to avoid the left turn only lane – a tough option?

There is no cycle lane nor any mechanism to prevent potential left hooks.

The cyclist in the photo on the right must have chosen that position to avoid the motors turning left into Eversholt Street at this junction and then be able to take the right lane at the junction with Camden High Street. This illustrates the sort of “assertive cycling” required to use this junction. There is a short length of mandatory cycle lane and a single motor lane on approach to a half-width ASL box. The only movement for any vehicle is ahead towards Camden High Street and Hampstead Road, but there is no cycle lane to use on the way there.

We also noticed that motors took advantage of the half-width box, stopping well beyond their own stop line (the photo on the right was taken during Stage 4 of the signals). But even the 253 buses seemed to get round the corner without hitting the motors abusing the ASL, so why not have a full-width ASL box? The photo on the left shows that there are three approach lanes to the stop line, one  labelled ‘left turn only’ for Hampstead Road and the other two labelled as ‘ahead only’ for what is logically a right turn into Camden High Street; there is no approach cycle lane, no ASL box, nor any mechanism to prevent potential left hooks or help people on bikes to turn to the east side of Camden High Street – as many do to reach Plender Street or to ride to Britannia Junction in a position that allows turning to Camden Road or Kentish Town Road.

Again, we  assumed that cycles not turning into Hampstead Road are expected to avoid the left turn only lane.

The photo in the middle shows cyclists moving forward as the signals change allowing the right turn while the left turn is held. The cyclists look as though they may be heading for the west side of Camden High Street which is the easier move at this stage of the signals.

The photo on the right illustrates the fact that this 134 bus, like most other left-turning buses needs to perform the turn from the middle lane. This may be seen as an indication that really only two motor lanes are needed, making space available for a protected cycle lane. In fact, the presence of a left lane dedicated to cycles would make it easier for left turning buses. Ahead of the “KEEP CLEAR” are a mandatory cycle lane and a pair of motor lanes leading to a three quarter width ASL box – see the photo on the left. Since there is no right turn into Crowndale Road, the only choice is to go ahead up Camden High Street. But there is no cycle lane on Camden High Street – just a bus lane, whereas the original consultation plan showed a cycle lane.

The photo on the right shows motors turning out of Crowndale Road into Camden High Street (in Stage 3) as well as a motor in Hampstead Road that should be behind the stop line. We noted that the buses were able to turn into Hampstead Road in such cases, so think a full-width ASL box should be provided. The intention is that southbound cycles on Hampstead Road should be able to turn right into Mornington Crescent through a gap in the central concrete strip as sometimes is possible when the “KEEP CLEAR” is not blocked – see the photo on the left.

In ideal conditions, the southbound cycles should get there first and then be able to go straight through the gap. But this will not be the case because southbound cycles are mingled with other southbound traffic (in Stage 3 of the signals). They need space in the gap to wait before turning right. At this stage in the signals, the northbound traffic on Hampstead Road will be waiting and the right turn will be possible provided that the “KEEP CLEAR” is not abused.

The photo on the right shows that the 134 bus is too long to fit between the ASL box and the exit from Mornington Crescent. This may encourage other motors to follow on.

CLOS (Cycling Level Of Service) assessments of these junctions The diagram on the right gives a score to each of the five junctions described above. In this scheme, devised by Brian Deegan, the coloured arrows indicate the available turns out of the junction with green indicating a move that is suitable for all cyclists, amber for most cyclists and red for only experienced cyclists. We have been unable to place any green arrows due to the lack of continuous space for cycling through the manoeuvre. For example, the photo on the left shows that the footway is being extended while there is no cycle lane on the carriageway of Camden High Street.

Two of the red arrows correspond to potential left hooks. The black bars indicate a turn that is not catered for. Each arrow corresponds to a score (0 for red, 1 for amber and 2 for green).

Each of the junctions numbered 1-4 above gets a score of only 1 out of 4 or worse. The overall score for Cobden Junction including the right turn at the 5th junction (1/2) is 4 out of 18.

Site visit on 24th August 5:30-7pm – study of safety of cyclists through the junction

Each of the si 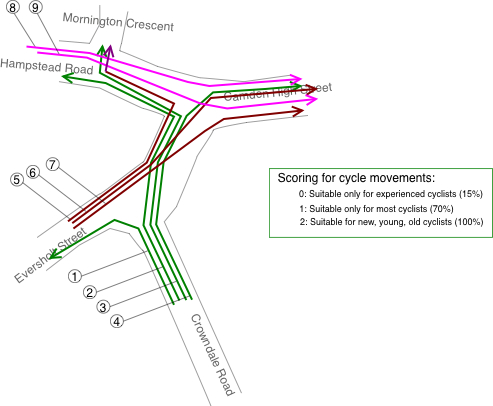 x participants was asked to consider the nine journeys shown on the map on the right. For each journey they were invited to allocate a score of 2, 1 or 0 according to whether the journey would be suitable for all cyclists, for most cyclists or for only experienced cyclists. The results are shown in the table below.

We also noted that not a single one of these journeys can be experienced in the return direction. For example, nobody can ride from Mornington Crescent to Crowndale Road or Eversholt Street.

We observed quite a number of examples of attempts to do such journeys by riding on the footway or by opportunistic contraflow cycling on the road. 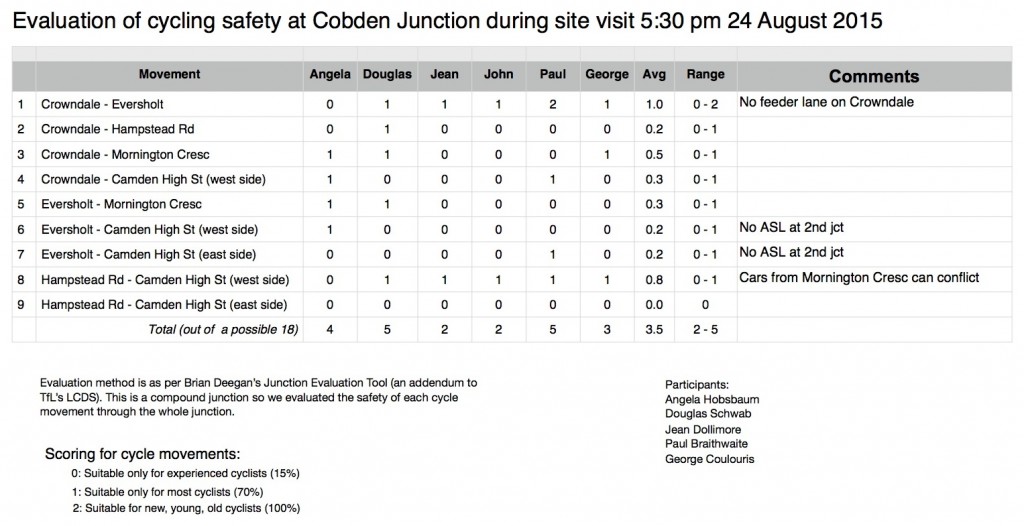 We were called to a meeting with very senior officers from the Transport Team and three TfL officers to be told that “the scheme is to be aborted because it is not acceptable to have islands“.

The TfL officers stated that following a stage 2 audit, they had rejected the islands because:

Our counter proposal was to ban the left at Eversholt Street and to consider ELH at the second junction only.

But officers responded that the main pedestrian movement is outside the station and t hat the confusion would still arise even with wider islands.

Phil Jones (Cabinet Member for Sustainability, Transport and Planning) accepted the recommendations in the officers’ report on Cobden Junction.

You may recall that there had been hopes that it could be possible to introduce contraflow cycling along Crowndale Road, but that idea was rejected before consultation due to the impact on buses.  See our discussion of the consultation on CycleScape. Our final response is also on CycleScape.

Since we had been very critical about safety for cycling through the junction, we had further discussions with Camden officers and eventually had to decide between safety and permeability. Since safety must come first and also the contraflow was unlikely to be agreed, we asked Camden to implement a “cycle segregated junction” – one that eliminates the possibility of left hooks.

In the drawing below you can see the kerbs separating the cyclists and the left turning motors  and another kerb between left turning and straight ahead motors. The kerbs are needed for the different signals. The officers report can be seen on Camden Council website.

Since this design for Cobden Junction has got the green light we are very pleased: as far as I know, there isn’t yet another one in the UK. It is very gratifying that LB Camden was willing to work out how to do this before the details were published in the long-awaited LCDS version 2.

I have been trying to explain it to various people and find it hard to convey the details.  For example, you can  download my PowerPoint presentation (large file) given to the Transport Liaison Public Meeting, Wednesday 19 February 2014.