I was pleased to be able to attend the CEoGB‘s AGM which took place over the weekend just gone in Greater Manchester. This is the first of three posts which will explain some of what we saw.

The event followed the positive news from Andy Burnham, the Mayor of the Greater Manchester Combined Authority (GMCA) and his walking and cycling commissioner, Chris Boardman, of a plan to invest in new cycling routes and walking infrastructure across the region. You can read more about the vision, Made to Move and the Beeline proposals on the Transport for Greater Manchester’s website (TfGM).

The weekend also saw the Women’s Festival of Cycling on the Saturday (30th June) and the 2018 Let’s Ride cycling festival (photograph below) on the Sunday with streets closed to motor traffic and all manner of events going on around the route. If you’ll forgive me, there was a real buzz in the city.

However, we are interested in Greater Manchester which is a group of 10 boroughs which each deal with their own road networks, but with TfGM providing a strategic overview (but not running any roads itself) – if I have got any of this wrong, then feel free to let me know!

I’m going to start with what we saw in Salford, which is to the west of Manchester. Our guide was Catriona Swanson, the lead for walking and cycling with Salford City Council and as well as seeing some recent work, we also had some of the City’s plans explained to us such as ambitious transformation of Chapel Street.

The street is currently having huge amounts of development taking place and as you might expect, cycling features heavily in the plans. Above is a photograph taken from Bury Street, looking east towards Sacred Trinity Church. The plans are radical; 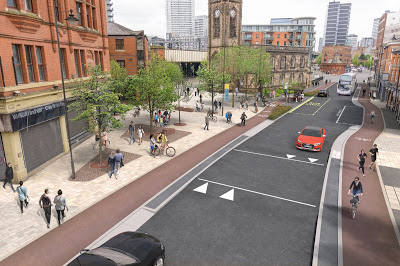 Space for motor traffic is squeezed a bit to provide space for buffered cycle tracks which, along with the footways, will be continuous and drivers accessing side streets will have to negotiate ramped kerbs so the footway and cycle track levels are maintained – could we get some Dutch-style kerbs made in the UK? Watch this space!