Home / Other News / As the fracking protesters show, a people’s rebellion is the only way to fight climate breakdown

As the fracking protesters show, a people’s rebellion is the only way to fight climate breakdown

the guardian) George Monbiot Thu 18 Oct 2018 Our politicians, under the influence of big business, have failed us. As they take the planet to the brink, it’s time for disruptive, nonviolent disobedience Illustration by Bill Bragg It is hard to believe today, but the prevailing ethos among the educated elite was once public service…. [Read More]

Thu 18 Oct 2018
Our politicians, under the influence of big business, have failed us. As they take the planet to the brink, it’s time for disruptive, nonviolent disobedience 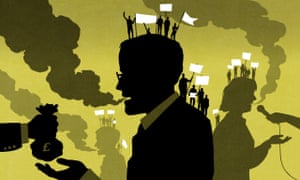 It is hard to believe today, but the prevailing ethos among the educated elite was once public service. As the historian Tony Judt documented in Ill Fares the Land, the foremost ambition among graduates in the 1950s and 60s was, through government or the liberal professions, to serve their country. Their approach might have been patrician and often blinkered, but their intentions were mostly public and civic, not private and pecuniary.

Today, the notion of public service seems as quaint as a local post office. We expect those who govern us to grab what they can, permitting predatory banks and corporations to fleece the public realm, then collect their reward in the form of lucrative directorships. As the Edelman Corporation’s Trust Barometer survey reveals, trust worldwide has collapsed in all major institutions, and government is less trusted than any other.

As for the economic elite, as the consequences of their own greed and self-interest emerge, they seek, like the Roman oligarchs fleeing the collapse of the western empire, only to secure their survival against the indignant mob. An essay by the visionary author Douglas Rushkoff this summer, documenting his discussion with some of the world’s richest people, reveals that their most pressing concern is to find a refuge from climate breakdown, and economic and societal collapse. Should they move to New Zealand or Alaska? How will they pay their security guards once money is worthless? Could they upload their minds on to supercomputers? Survival Condo, the company turning former missile silos in Kansas into fortified bunkers, has so far sold every completed unit.

Most governments, like the UK, Germany, the US and Australia, push us towards the brink on behalf of their friends

Trust, the Edelman Corporation observes, “is now the deciding factor in whether a society can function”. Unfortunately, our mistrust is fully justified. Those who have destroyed belief in governments exploit its collapse, railing against a liberal elite (by which they mean people still engaged in public service) while working for the real and illiberal elite. As the political economist William Davies points out, “sovereignty” is used as a code for rejecting the very notion of governing as “a complex, modern, fact-based set of activities that requires technical expertise and permanent officials”.

Nowhere is the gulf between public and private interests more obvious than in governments’ response to the climate crisis. On Monday, UK energy minister Claire Perry announced that she had asked her advisers to produce a roadmap to a zero-carbon economy. On the same day, fracking commenced at Preston New Road in Lancashire, enabled by the permission Perry sneaked through parliament on the last day before the summer recess.

The minister has justified fracking on the grounds that it helps the country affect a “transition to a lower-carbon economy”. But fracked gas has net emissions similar to, or worse than, those released by burning coal. As we are already emerging from the coal era in the UK without any help from fracking, this is in reality a transition away from renewables and back into fossil fuels. The government has promoted the transition by effectively banning onshore wind farms, while overriding local decisions to impose fracking by central diktat. Now, to prevent people from taking back control, it intends to grant blanket planning permission for frackers to operate.

None of it makes sense, until you remember the intimate relationship between the fossil fuel industry, the City (where Perry made her fortune) and the Tory party, oiled by the political donations flowing from both sectors into the party’s coffers. These people are not serving the nation. They are serving each other.

In Germany, the government that claimed to be undergoing a great green energy transition instead pours public money into the coal industry, and deploys an army of police to evict protesters from an ancient forest to clear it for a lignite mine. On behalf of both polluting power companies and the car industry, it has sabotaged the EU’s attempt to improve its carbon emissions target. Before she was re-elected, I argued that Angela Merkel was the world’s leading eco-vandal. She might also be the world’s most effective spin doctor: she can mislead, cheat and destroy, and people still call her Mutti.

Other governments shamelessly flaunt their service to private interests, as they evade censure by owning their corruption. A US government report on fuel efficiency published in July concedes, unusually, that global temperatures are likely to rise by 4C this century. It then uses this forecast to argue that there is no point in producing cleaner cars, because the disaster will happen anyway. Elsewhere, all talk of climate breakdown within government is censored. Any agency seeking to avert it is captured and redirected.

In Australia, the new prime minister, Scott Morrison, has turned coal burning into a sacred doctrine. I would not be surprised if the only lump of coal he has ever handled is the one he flourished in the Australian parliament. But he dirties his hands every day on behalf of the industry. These men with black hearts and clean fingernails wear their loyalties with pride.

If Jair Bolsonaro takes office in Brazil, their annihilistic actions will seem mild by comparison. He claims climate breakdown is a fable invented by a “globalist conspiracy”, and seeks to withdraw from the Paris agreement, abolish the environment ministry, put the congressional beef caucus (representing the murderous and destructive ranching industry) in charge of agriculture, open the Amazon Basin for clearance and dismantle almost all environmental and indigenous protections.

With the exception of Costa Rica, no government has the policies required to prevent more than 2C of global warming, let alone 1.5C. Most, like the UK, Germany, the US and Australia, push us towards the brink on behalf of their friends. So what do we do, when our own representatives have abandoned public service for private service?

On 31 October, I will speak at the launch of Extinction Rebellion in Parliament Square. This is a movement devoted to disruptive, nonviolent disobedience in protest against ecological collapse. The three heroes jailed for trying to stop fracking last month, whose outrageous sentences have just been overturned, are likely to be the first of hundreds. The intention is to turn this national rising into an international one.

This preparedness for sacrifice, a long history of political and religious revolt suggests, is essential to motivate and mobilise people to join an existential struggle. It is among such people that you find the public and civic sense now lacking in government. That we have to take such drastic action to defend the common realm shows how badly we have been abandoned.