Home / Other News / ‘If we wanted beauty, we’d travel to Paris’: how Calgary resisted its iconic pedestrian bridge

‘If we wanted beauty, we’d travel to Paris’: how Calgary resisted its iconic pedestrian bridge

The Guardian) Last modified on Mon 22 Oct 2018 13.31 BST The controversial Peace Bridge is now one of the most-used walking and cycling routes in Calgary. The councillor behind it reveals the project’s stormy process The Peace Bridge was designed by Spanish architect Santiago Calatrava. Photograph: Witold Skrypczak/Getty Images/Lonely Planet Image “The level of… [Read More]

The controversial Peace Bridge is now one of the most-used walking and cycling routes in Calgary. The councillor behind it reveals the project’s stormy process 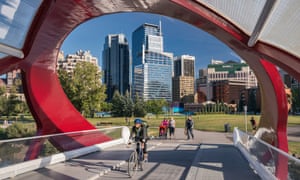 “The level of hatred directed towards that piece of infrastructure was out of proportion with the cost,” says Druh Farrell as she recalls the stormy process leading to the construction of Santiago Calatrava’s pedestrian and cycling Peace Bridge in Calgary. “It was an incredibly painful process. It became so intense.”

The celebrated Spanish architect was brought in to address a complicated brief. The crossing – connecting downtown to the northern river pathway and the community of Sunnyside – had to completely span the Bow River, while being flat enough to avoid obstructing a nearby helicopter-landing area.

Bringing in a big name didn’t change people’s opinions, however. For the opening of the bridge, councillor Farrell was escorted by four bodyguards. Even Farrell’s brother had to endure the ire directed at the Peace Bridge when a dinner guest discovered their relation and said to him: “You tell your sister that if we wanted beauty, we’d travel to Paris. In Calgary we just need it to work.”

“It was the first piece of significant infrastructure predominantly for active mobility,” Farrell explains. “If it had been for vehicles, we would not have had any debate, and it would not have been controversial.”

Since its ribbon-cutting in March 2012, though, the Peace Bridge has become one of the most-travelled walking and cycling routes in the city, with more than 5.5 million crossings, an average of 28,000 per week – not bad for a region that enjoys a meagre 1.75% modal share for cycling. 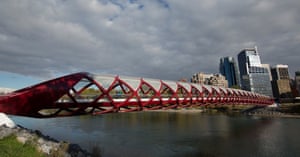 Most Canadians know Alberta as “Oil Country” due to its economic dependence on the Tar Sands. Calgary, Canada’s fourth largest city, is home to a number of oil and gas headquarters. Covering a 848 sq kilometre area – eight times the size of San Francisco – and sprawling endlessly into the prairies, it’s easy to see why driving has become the default mode of transportation for the vast majority of Calgarians.
In recent years however, things have started to shift, and residents have begun demanding options. Farrell sits at the heart of that transition. In 2007 Calgary’s Centre City Plan was passed by a vote of the council under the then-manager of planning and design, Brent Toderian. The plan established that they would not consider any new river crossings for motor vehicles entering the downtown core. Situated where the Bow and Elbow rivers meet, Calgary’s downtown is only accessible from the north and east by means of a river crossing, resulting in several car-dedicated bridges that are largely unwelcoming to cyclists and pedestrians.