Marianna, the ‘city of southern charm’, saw Hurricane Michael pass directly through, leaving behind shredded bricks and a matted mess of tangled cables Jamiles LarteyLast modified on Fri 12 Oct 2018 17.45 BST Larry White: ‘They’ll be talking about this one in Marianna for years to come.’ Photograph: Jamiles Lartey for the Guardian There’s an… [Read More]

Marianna, the ‘city of southern charm’, saw Hurricane Michael pass directly through, leaving behind shredded bricks and a matted mess of tangled cables 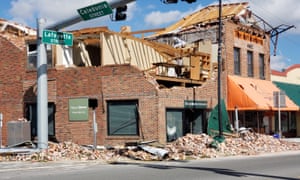 Larry White: ‘They’ll be talking about this one in Marianna for years to come.’ Photograph: Jamiles Lartey for the Guardian

There’s an unmistakable scent of barbecue and pine down Kelson Avenue in Marianna, Florida, and the faint hum and buzz of generators and chainsaws all around. On the corner, residents of an apartment complex have pooled the remaining meat in their fridge and freezers to cook.

“Your food is gonna go bad so we might as well cook it,” said Robert Hill. “Plus it brings you closer as a community.”

“It’s like a bomb hit, everywhere you look it’s just devastation,” said Hill who, amid the muted celebratory feeling of the impromptu cookout, had an ominous warning. “Today is the best day we’re going to have. Tomorrow is going to be rough,” Hill said. “We just used the food that was in the freezer, so tomorrow it’s not gonna be there. The store’s not gonna be open and you won’t be able to get cash out the ATM neither.”

Not a single store appeared to be open in the city on Thursday, with the downtown corridor of Lafayette Street utterly in tatters. On one corner, a brick building housing an Edward Jones financial office had its bricks shredded by Michael, in a heap on the pavement, with most of the second story obliterated. Multiple building faces had been ripped clear off, now resembling doll houses, and revealing floors bowed by Michael’s destructive power.

Down the road, the Jackson county courthouse was a tangled mess with overturned benches and flattened historical marker signs. To the left of the entrance, Michael managed to do something that more often happens via protest, civil disobedience or political pressure – it felled a memorial to Confederate soldiers, snapping it at its base.
Business owner Bugra Demirel recalled riding out the storm in his Brothers Beauty & Fashion store. “I have not been scared this much in my life. This building started shaking like this,” motioning his hands, “and the sound of the wind …” he shook his head.

His newly built store was mostly unscathed but he watched as other businesses on the drag were decimated, like the piano tuning shop across the street. “We saw the roof literally get sucked up and it just flew away,” Demirel said.

“Corporate stores – they have contents insurance, building insurance … they’ll be fine, but these guys – mom and pop stores – I’m just thinking about all of them right now. Even us, tomorrow we have to start calling the banks, suppliers – they’re going to have to work with us.”