Home / Other News / ‘Build it and they will come’: Tirana’s plan for a ‘kaleidoscope metropolis’

‘Build it and they will come’: Tirana’s plan for a ‘kaleidoscope metropolis’

The Guardian) Mon 29 Oct 2018 The first years of post-dictatorship freedom produced a disorderly, car-choked city. Can the Albanian capital’s slick young mayor create a future of ‘exemplary urban design’? If you stand in the middle of Tirana’s vast Skanderbeg Square and turn 360 degrees, you will see Italian fascist architecture, buildings in the… [Read More]

If you stand in the middle of Tirana’s vast Skanderbeg Square and turn 360 degrees, you will see Italian fascist architecture, buildings in the Russian and Chinese communist style, a mosque, an Orthodox Christian church, the gleaming glass rectangle of the Tirana International Hotel and the bleak carcass of the unfinished Archea tower.

Tirana doesn’t follow the pattern of most European cities. The square is in the middle, but there is no city centre as such, and no major shopping street comparable to Regent Street or the Rue de Rivoli. Nor is there the familiar conjugation of chain stores – no Zara, no Mango, no Nando’s or McDonalds.

Everything about the city feels haphazard. And now one man is charged with bringing it to order.

Tirana’s lively, chaotic urban fabric reflects its extraordinary history. In 1912, Albania won independence from the Ottomans, only to be occupied by Mussolini’s fascists in 1939, then liberated by the communist militias who ushered in a repressive and paranoid regime under the personality cult of Enver Hoxha. For 45 years, it was a Balkans version of North Korea. 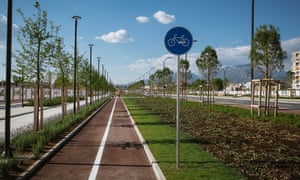 Bike lanes on New Boulevard, Tirana Under Hoxha the country was totally isolated, falling out even with the comrades in Moscow and Beijing. Anyone who tried to leave was shot as a traitor. So when the regime finally fell in 1992, opening the door to freedom of movement and free-market capitalism, people – understandably – went a little bit crazy.

Albanians emigrated in huge numbers, mostly to neighbouring Greece and Italy. For those who stayed, the first thing they did with their newfound wealth was to buy a car. In 1992 there were 200 cars in Tirana, all allocated to the Hoxha nomenklatura; today there are 200,000.