the guardian) Extinction Rebellion group calls for environment to be made ‘top editorial issue’ Fri 21 Dec 2018 The BBC’s central London headquarters has been put on lockdown due to a protest by climate change campaigners who are demanding it uses its status as national broadcaster to declare a “climate and ecological emergency”. Extinction Rebellion,… [Read More]

Fri 21 Dec 2018
The BBC’s central London headquarters has been put on lockdown due to a protest by climate change campaigners who are demanding it uses its status as national broadcaster to declare a “climate and ecological emergency”.

Extinction Rebellion, a direct action group that has recently shut down key London roads, has demand the BBC makes the environment its “top editorial issue”.

Broadcasting House was locked down early on Friday afternoon, with BBC staff and guests unable to enter or leave the building while security kept the peaceful but noisy protesters away from the entrance.

Extinction Rebellion activists, who are demanding a meeting with the BBC director general, Tony Hall, said the corporation had a duty to broadcast about climate change with “the level of urgency placed on informing the public about the second world war”. 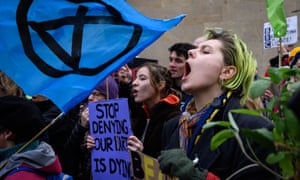 Environmental protesters from the Extinction Rebellion group chant during a demonstration outside BBC Broadcasting House in central London. Photograph: Leon Neal/Getty Images The broadcaster Anneka Rice said she was stuck in the BBC reception “with Simon Mayo, Ken Bruce and three policemen” during the protest.

The campaign group launched two months ago, with a declaration of support from public figures including the former archbishop of Canterbury Rowan Williams, who backed a campaign of civil disobedience to draw attention to the threat of climate and ecological change.

Since then, Extinction Rebellion activists have blocked bridges and glued themselves to the gates of Downing Street, earning media attention that has allowed the campaign to spread to 35 overseas countries. 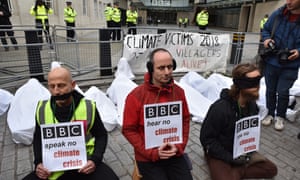 Friday’s demonstration outside BBC headquarters. Photograph: Matthew Chattle/Barcroft Images The BBC has been criticised for its coverage of climate change, especially the decision to give airtime to climate change sceptics such as Lord Lawson, who oppose the scientific consensus. Earlier this year, the head of news, Fran Unsworth, told staff that the corporation had struggled with the topic: “Climate change has been a difficult subject for the BBC, and we get coverage of it wrong too often.”

She added: “To achieve impartiality, you do not need to include outright deniers of climate change in BBC coverage; in the same way you would not have someone denying that Manchester United won 2-0 last Saturday. The referee has spoken.”

The BBC acknowledged it had received a letter from a “newly formed campaign group” but did not comment on the demand for a meeting with the director general.

“The BBC has a proud record of leading the way in sustainability in the media industry and we’ve set out further action including cutting energy use further, eradicating single-use plastic and minimising the impact of necessary travel,” said a spokesperson.

“In the last charter period, we reduced our carbon footprint by a third. People can also see the clear impact programmes like Blue Planet II and Dynasties have had on public debate about the impact of humankind on the planet.”