As the world’s first junior cycle mayor, Lotta Crok wants to draw attention to the obstacles kids on bikes face – and inspire other children to cycle 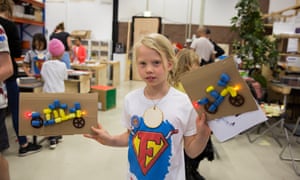 Lotta is the first junior cycle mayor in the world and her working area is the Dutch capital. It is her mission to inspire children to cycle every day and draw attention to the obstacles that kids on bikes are facing.

You would think this challenge would be superfluous in a city known as the bicycle capital of the world. The number of bicycles in Amsterdam is estimated at 881,000 – more than the city’s 850,000 inhabitants – and 63% of the population cycle daily.

But children who cycle in Amsterdam face challenges, Lotta says: “The three biggest problems for us are cars, cycling tourists and scooters. The cars take up too much space, the tourists are always swaying side to side and stop when you least expect it, and the scooters simply run you over.” 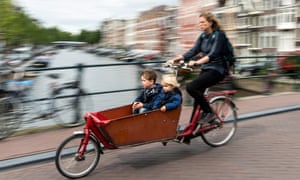 Although many people in Amsterdam ride bikes, senior cycle mayor Katelijne Boerma believes “there is still a world to win” in terms of cycle use. Photograph: Renato Granieri/Alamy Lotta became junior cycle mayor in June last year when she won a contest in which schoolchildren were asked to come up with plans to make cycling safer and more fun. Her idea was to add children’s bikes and tandems to the popular bike share programme run by Nederlandse Spoorwegen (NS), the state-owned railway operator. “My parents don’t have a car, so when we go to another city we always take the train and then a railway-bike,” she says. “But because they don’t have bicycles for children, I have to go on the back of my father’s bike, which is a bit dangerous.”

NS congratulated Lotta on her idea and offered to equip the railway station near where her grandparents live in Haarlem with a child’s bike. But the junior cycle mayor was not that easily satisfied: “I told them it was not enough. I am not bicycle mayor for myself, but for all children in Amsterdam.” NS is now considering a pilot with children’s bikes in one station.

In the office of BYCS, the organisation that runs the cycle mayor programme, Lotta meets Katelijne Boerma, the cycle mayor of Amsterdam. It was Boerma’s idea to appoint a junior colleague. “There are 125,000 children in this city and I was thinking of ways how to reach them,” she says. “And then I realised, to encourage children to start cycling, you simply need a role model.” 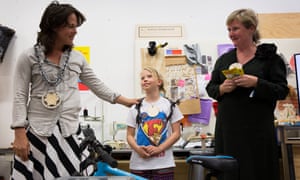 Lotta Crok, Amsterdam’s first junior cycle mayor, with senior cycle mayor Katelijne Boerma (left). Photograph: Anke Teunissen But do children in Amsterdam really need to be encouraged to jump on their bikes? Boerma thinks so. “There are people from 200 different cultures living here and some do not see the bike as a safe mode of transport. So their children go to school by bus, they ride a scooter once they are 16 and when they grow up, they go to work by car. There’s still a world to win.”

Since Lotta was appointed junior cycle mayor, she has been busy, giving interviews, opening cycling contests in the city and being a jury member during the Amsterdam Light Parade, an event in which Amsterdammers decorate their bikes with lights.

She is now planning a meeting with the city’s mayor to discuss ideas that children have come up with: “One of our proposals is a bicycle park where children can learn how to cycle. Right now, most of us learn it in the street, which can be quite busy. It’s much nicer when you can practise in a special park. Another idea is to create an app for tourists to teach them the rules of cycling, because most of them really don’t know.”

When asked if she cycles a lot herself, she says it is so normal for her that she never really gives it a second thought: “I go to school by foot, because it is very close by, but I do many other things by bike. I cycle to my theatre class every Saturday, for example. But the traffic in Amsterdam is very busy. We really need more people to leave their cars and go by bike.” 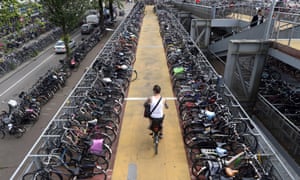 A man rides his bike down from a three-storey bike parking structure near Amsterdam’s main railway station. Photograph: Timothy Clary/AFP/Getty Images Following the success of the Amsterdam scheme, cycle mayors around the world are now planning to appoint junior colleagues. “They see it works really well,” Boerma says. “I talk to the parents, Lotta talks to the children. And if you look at the city through the eyes of a child, you will also make it accessible for others. A city that’s good for an eight-year-old is also good for an 88-year-old.”

Lotta thinks it is great that more cities are following Amsterdam’s example. “Once I went on a holiday to England, to a city called Bath, and I saw there were not so many children cycling there,” she says. “They could really benefit from a junior bicycle mayor.”