Home / Outline of past campaigns / Going Dutch in TCR – how to mix buses and cycles?

LCC members voted for Going Dutch as a campaign for 2012 mayoral elections. CCC members suggested that we should try to persuade Camden Council to implement an example in Tottenham Court Road when it becomes two way.

Index to this page

Discussion with people who came to our December get together with maps and ideas. See Report in new window (not on this page)

These discussions formed a part of our regular meetings with Camden officers. As the accounts here are informal, we have not recorded names.

We started by making counts on the cycle route between Torrington Place and Howland Street as this is the part of TCR most interesting to cyclists. 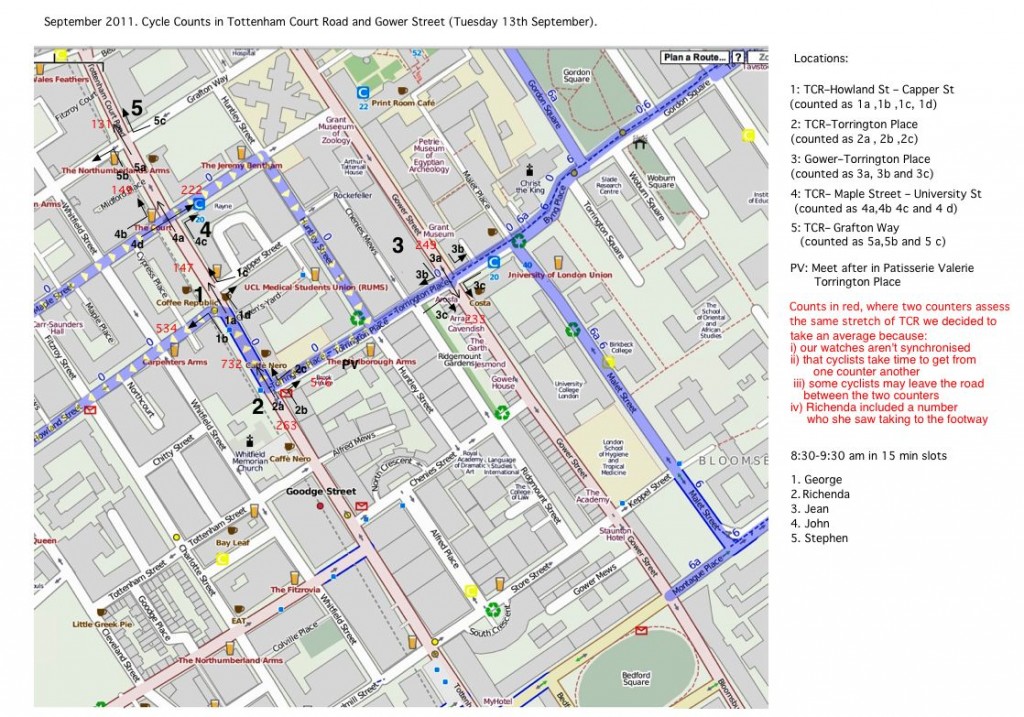 Click here to see the detailed counts in new window.

Camden Council’s LIP states that Tottenham Court Road and Gower Street will revert to two-way working and that TCR southbound will be buses and cycles only.

We have considered only the stretch between Torrington Place and Maple Street so far.

hopefully there will be no car parking

This meeting clarified the following:

These ideas together with suggestions from members and from a meeting at LCC are shown here.

There is concern that recent schemes in London make pavements wider and include median strips, leaving little room for cyclists. See our note on an example at Pall Mall

This meeting discussed the following:

Notes on discussion with Camden officers May 2012

We were pleased that Brian Deegan has been brought in to help with designing for cyclists. In addition some major design changes are proposed: they seem to be aimed at opening up all movements to cyclists as well as calming the street to ensure the 20 mph limit which now seems to be a definite criterion. 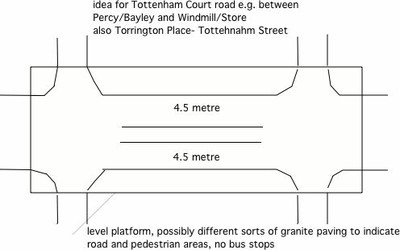 Camden Council invited us to say exactly what we’d like for TCR/Gower and we asked for Tottenham Court Road to be treated as the main cycle route and to have Dutch Infrastructure, including 2m wide lightly segregated cycle tracks and island bus stops:

But following this, Camden did some drawings that showed that in most of TCR there is not room for island bus stops and wide cycle tracks mainly because bus stops are may need to be opposite one another. We already acknowledged that the island loading bays was a bad idea. At the northern end, e.g. outside Warrne Street station, there is too much contention between bus passengers and cycles to allow for island bus stops.

In TCR Camden has aimed for a street that satisfies the needs of pedestrians first, acknowledges the needs of cyclists and buses. In order to provide space for cycling, they plan to eliminate as much through private motor traffic as possible.  They had always intended that SB would be only buses and cycles with a few deliveries over a short stretch. More recently they have proposed eliminating NB private motor vehicles during most of the day. That is, no taxis or private motor vehicles are allowed to enter from the north at any time and from the south between hours to be decided.

The consultation was published on 8th June 2014.

To information about Dutch Cycling Infrastructure