the guardian) The Guardian view on cars and drivers: more haste less speed EditorialSun 25 Mar 2018 18.06 BST Cars seem to promise unfettered individualism. In the real world, they reveal the limits of selfishness Traffic jam on the M25. ‘Sitting in a more comfortable car in a different traffic jam is pleasant but hardly… [Read More]

Cars seem to promise unfettered individualism. In the real world, they reveal the limits of selfishness 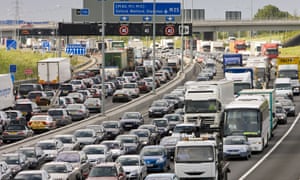 Traffic jam on the M25. ‘Sitting in a more comfortable car in a different traffic jam is pleasant but hardly the liberation that once seemed to be promised.’ Photograph: Robert Harding/Rex/Shutterstock

The internal combustion engine has changed the world as much as almost any other invention of the last 150 years. The car has reshaped our cities and colonised our imaginations. It seems to offer autonomy for everyone. There is something almost delightful in the buoyant detachment from reality of advertisements showing mass-produced cars, almost all impossible for any but obsessives to tell apart, marketed as symbols of individuality and of freedom when most of their lives will be spent making short journeys on choked roads.

For all the fuss made about top speeds, cornering ability and acceleration, the most useful widgets on a modern car are those which work when you’re going very slowly indeed: parking sensors, sound systems, and navigation apps which will show a way around upcoming traffic jams. This seems to be one of the few areas where the benefit of sharing personal information comes straight back to the sharer: because Google knows where almost all its users are, and how fast they are moving almost all the time, it can spot traffic congestion very quickly and suggest ways round it.

The problem comes when everyone is using a smartphone which tells them to avoid everyone else with a smartphone. Traffic jams abound where no one has enough information to avoid them. When a lucky few have access to the knowledge, they will benefit greatly. But when everyone has perfect information, traffic jams simply spread onto the side roads that seem to offer a way round them. This is exactly what the tragedy of the commons would predict, and now there is research to show that it is actually happening.

This new congestion teaches us two things. The first is that the promises of technology will never be realised as fully as we hope; they will be limited by their unforeseen and unintended consequences. Sitting in a more comfortable car in a different traffic jam is pleasant – or at least less unpleasant than life was in the dark ages before smartphones – but hardly the liberation that once seemed to be promised. The second is that self-organisation will not get us where we want to go. The invisible hand does not straighten out the world, but knots it up more tightly. The efforts of millions of drivers to get ahead do not miraculously produce a situation in which everyone does better than before, but one in which almost everyone does rather worse. Central control and collective organisation can produce smoother and fairer outcomes, though even that much is never guaranteed.

Similar limits can be foreseen for the much greater advances promised by self-driving cars. Last week, one operated by Uber struck and killed a woman pushing her bicycle across a wide road in Arizona. This was the first recorded death involving a car which was supposed to be fully autonomous. (An earlier fatal crash killed the driver of a Tesla Model S car that was on semi-autonomous autopilot mode.) Experts have said that it suggests a “catastrophic failure” of technology, and have noted that the human “safety driver” in the car did not appear to have been monitoring the road in automatically recorded video.

Increasingly, even Silicon Valley is having to acknowledge the costs of the intoxicating hurry that characterises its culture. When these appear only on balance sheets, they are easily written off as externalities, but when that momentum is translated into the physical world, the costs are higher. What traffic teaches us is that headlong and uncontrolled change is as likely to make us collateral damage as it is to benefit us, and that thoughtful regulation is necessary for a better future.