Home / Other News / Rising seas: ‘Florida is about to be wiped off the map’

Rising seas: ‘Florida is about to be wiped off the map’

the guardian) Elizabeth Rush Tue 26 Jun 2018 12.37 BST Sea level rises are not some distant threat; for many Americans they are very real. In an extract from her chilling new book, Rising, Elizabeth Rush details how the US coastline will be radically transformed in the coming years ‘Take the six million people who… [Read More]

Sea level rises are not some distant threat; for many Americans they are very real. In an extract from her chilling new book, Rising, Elizabeth Rush details how the US coastline will be radically transformed in the coming years 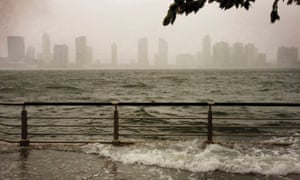 ‘Take the six million people who live in south Florida today and divide them into two groups: those who live less than six and a half feet above the current high tide line, and everybody else.’ Photograph: Milkweed Editions

In 1890, just over six thousand people lived in the damp lowlands of south Florida. Since then the wetlands that covered half the state have been largely drained, strip malls have replaced Seminole camps, and the population has increased a thousandfold. Over roughly the same amount of time the number of black college degree holders in the United States also increased a thousandfold, as did the speed at which we fly, the combined carbon emissions of the Middle East, and the entire population of Thailand.

About 60 of the region’s more than 6 million residents have gathered in the Cox Science Building at the University of Miami on a sunny Saturday morning in 2016 to hear Harold Wanless, or Hal, chair of the geology department, speak about sea level rise. “Only 7% of the heat being trapped by greenhouse gases is stored in the atmosphere,” Hal begins. “Do you know where the other 93% lives?”

A teenager, wrists lined in aquamarine beaded bracelets, rubs sleep from her eyes. Returns her head to its resting position in her palm. The man seated behind me roots around in his briefcase for a breakfast bar. No one raises a hand.

“In the ocean,” Hal continues. “That heat is expanding the ocean, which is contributing to sea level rise, and it is also, more importantly, creating the setting for something we really don’t want to have happen: rapid melt of ice.”

A woman wearing a sequined teal top opens her Five Star notebook and starts writing things down. The guy behind her shovels spoonfuls of passionfruit–flavored Chobani yogurt into his tiny mouth. Hal’s three sons are perched in the next row back. One has a ponytail, one is in a suit, and the third crosses and uncrosses his gray street sneakers. The one with the ponytail brought a water bottle; the other two sip Starbucks. And behind the rows and rows of sparsely occupied seats, at the very back of the amphitheater, an older woman with a gold brocade bear on her top paces back and forth.

A real estate developer interrupts Hal to ask: “Is someone recording this?”