Home / Other News / January 2014 ) 40 cyclists killed, 4 drivers jailed: exclusive investigation reveals only one in 10 drivers are jailed after being involved in cyclist death

January 2014 ) 40 cyclists killed, 4 drivers jailed: exclusive investigation reveals only one in 10 drivers are jailed after being involved in cyclist death

London Evening Standard) Thursday 2 January 2014 12:07 Road victim: no prosecutions will follow the cycle death of Katharine Giles inset. Main picture, police observe London cyclists ( ) Drivers have only a one in 10 chance of being sent to jail after being involved in the death of a cyclist, an Evening Standard investigation… [Read More] 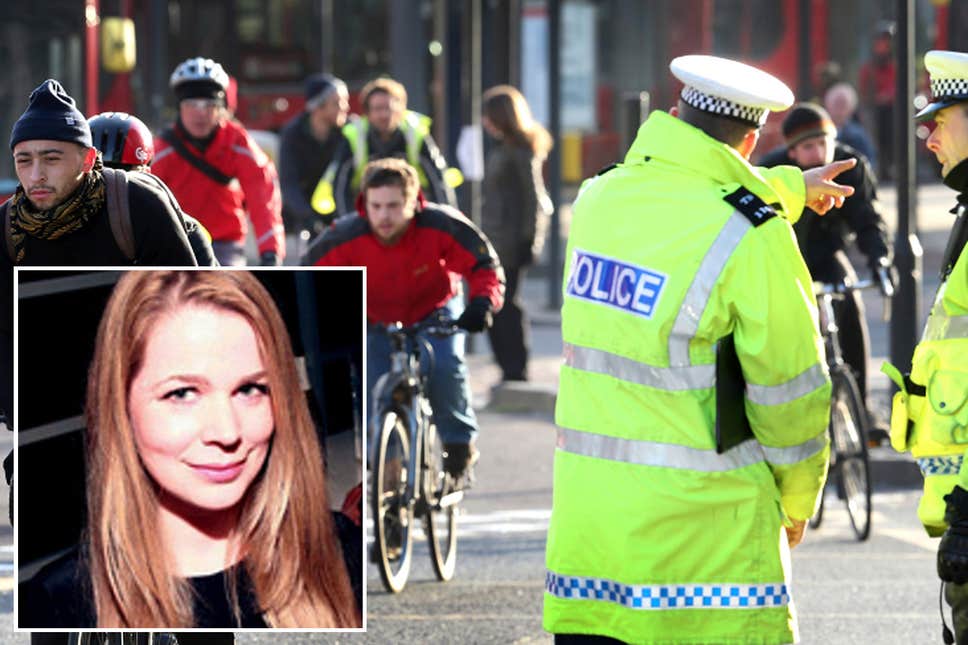 Drivers have only a one in 10 chance of being sent to jail after being involved in the death of a cyclist, an Evening Standard investigation reveals today.

An analysis of police data on the 40 cyclists killed in London between 2010 and 2012 found that drivers had been imprisoned on just four occasions.

There were seven further cases where minor or suspended sentences were imposed – allowing motorists to walk free. In at least 24 further cases, the Metropolitan or City of London police and the Crown Prosecution Service decided not to press charges or discontinued criminal proceedings. On four occasions the driver was cleared by a jury.

The revelations come as it emerged there will be no prosecution in a death involving an HGV last year – that of Dr Katharine Giles at Victoria.

Cyclist Alan Neve died last year in an incident involving an HGV. A 51-year-old is currently on bail on a charge of causing death by careless driving.

Their respective inquests are due to be heard tomorrow and on Monday.

Today politicians and campaigners warned the criminal justice system was failing to offer sufficient protection to cyclists by allowing convicted motorists to escape with “lenient” sentences.

Martin Porter QC, a cycling campaigner and blogger who has represented families of dead cyclists, said: “The chances are that if you run down a cyclist you will not be prosecuted.

“Not a single insured driver convicted of causing death by careless driving was imprisoned in London over this period. Large numbers will not get onto bicycles whilst driving behaviour that endangers them continues to go almost wholly undeterred.”

Baroness Jones, the Green member of the House of Lords and London Assembly, said: “It seems as if the criminal justice system goes soft and applies completely different rules to death and injury once you get behind the wheel of a vehicle.”

Caroline Pidgeon, Lib-Dem transport spokeswoman on the London Assembly, said: “All the evidence does suggest that far too often lenient sentences are being handed down to motorists and lorry drivers who have been convicted for careless driving which has contributed to the death of a cyclist.”

A total of 54 cyclists have been killed in London since 2010.

Police data obtained under freedom of information laws revealed the longest sentence imposed on a driver was four years. This was handed out last May to Barry Normah, 28, for killing 17-year-old Olatunji “TJ” Adeyanju in Deptford. Normah had sped through a red light and drove off soon after the collision before dumping the car.

TJ’s uncle and carer Steven Gisanrin said he was “extremely disappointed” at the sentence.

Family and friends of other killed cyclists, such as Frank Mugisha, who was hit as he rode on the A10 at Tottenham in 2012, and Svitlana Tereschenko, who died at the Bow roundabout in 2011, have also complained that the sentences were too weak or there was no prosecution.

The police documents reveal that no prosecutions were mounted in cases including former champion boxer Gary Mason, killed in Wallington in 2011, Tube driver Neil Turner and Olympics festival dancer Sofoklis Kostoulas, who both died last year.

They set out how the Met records in stark terms what is believed to have happened immediately prior to, and as a result of, the collision – often before an inquest has been held.

In the case of climate change scientist Dr Giles, 34, who died last April, the documents state: “Lorry is waiting in traffic to turn left. Vehicle is indicating and has an audible warning on. Cyclist has cycled up the nearside of the lorry.

“Lorry has moved off when lights turn green and turned left. Lorry has clipped wheel of cycle, knocking rider off. Lorry then drives over victim. Case complete as no evidence of offence by motorist.”

Note is also made of whether cyclists are wearing helmets or high-visibility clothing, as advised by the Highway Code. However, in many cases, a helmet would not have prevented the cyclist from suffering fatal crush injuries under lorries.

Mr Porter said: “The criminal justice system continues to have a motor-centric bias. Too often there is far more focus on whether or not the victim was wearing a helmet or hi-viz tabard rather than on whether greater care from the motorist could have avoided the collision.”

Two criminal trials are due to start next year following the deaths of Tarsem Dari and Hilary Lee in 2012.

Transport for London refused an identical FoI request to release the data it holds on fatal collisions, because it “hoped” to publish its own information relating to cyclist deaths in 2010 this summer.

The Crown Prosecution Service said it had no idea how many drivers had been prosecuted for killing cyclists as it did not record this separately from other motoring offences.