Liv has a reputation for making performance bikes for women, but its cheaper city bikes are every bit as good 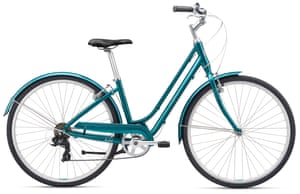 In case you hadn’t noticed – men and women have very different bodies. In general women are shorter, have narrower shoulders, carry less muscle mass and have proportionally longer legs and shorter backs than men. Despite these striking physiological differences, most bike builders were content to manufacture bicycles for the two sexes that were pretty much identical – except, of course, for the absence of a top bar, but that was only to make allowances for full skirts and social decency.

So, thank goodness then for Liv. The brainchild of the fearsome Bonnie Tu, often hailed as the ‘Godmother of Cycling’, the brand is the world’s first dedicated cycling brand for women. The bikes are designed by women, built by women, sold by women and, of course, ridden by women.

Tu is also the CFO of Giant, so she knows a thing or two about making female-friendly frames. Most of Liv’s bikes are sophisticated, high-end performance rides. But there are also some far simpler machines on offer, too. The Flourish, for instance, offers an elegant and easy way to get around town. No fuss, but lots of fun – and perfect for women.