Home / Other News / The politics of pedestrianisation

The politics of pedestrianisation

BBC News) Tom Edwards Transport correspondent, London @BBCTomEdwards If you walk through the City of London at 08:30 in the morning, you can’t fail to notice just how packed the pavements are. Going against the tide of people is extremely difficult in an environment that is just not designed for walking. That could be about… [Read More]

If you walk through the City of London at 08:30 in the morning, you can’t fail to notice just how packed the pavements are.

Going against the tide of people is extremely difficult in an environment that is just not designed for walking.

That could be about to change.

Next week, the local authority will take another step towards a bold, radical plan to change the streets in the Square Mile over the next 25 years.

Some streets could be closed to motor vehicles during rush hour and there could be zero emission zones.

There will also be a 15mph speed limit across the district.

The local authority wants to cut the number of vehicles by a quarter by 2025.

The issue of pedestrianisation raises the question again of who cities are for and who should benefit from them.

And any change in road space is contentious and highly charged.

The City’s local authority carried out a public consultation and discovered some stark facts.

It found 98% of people travel to the area by walking, cycling or public transport, while 84% think pavements are too crowded.

Four in five people think traffic levels in the City are too high, with 67% saying it contributes to poor air quality, while 59% said it creates an unpleasant street environment.

The authority said it listened to workers and businesses and has to deliver what they want to remain competitive – especially in a post-Brexit world.

It also said it must improve the area to appeal to business and wants to change the priority completely, giving more space to pedestrians and cyclists.

One of the City’s councillors, Chris Hayward, told me the age of chauffeur-driven cars is coming to an end.

“We have found that more and more cars don’t work,” he said.

He said CEOs are often seen now on bikes or walking, but as more offices will be opening, the City must reduce and divert traffic.

Black cab drivers have their concerns.

Steve McNamara of the Licensed Taxi Drivers’ Association (LTDA) says pedestrianisation is being dreamt up by middle-class blokes who don’t realise how the milk for their caramel lattes is delivered.

“They are strangling the best city in the planet and they don’t realise people need to have goods and services delivered,” he said.

He thinks the march to pedestrianisation will kill The City.

Living Streets, a charity, disagrees. It said what this shows is how transport has changed and how The City is now listening.

The charity argues a reallocation of road space is long overdue.

An interesting comparison to the City is in Westminster, where the mayor’s flagship policy was to pedestrianise a large part of Oxford Street.

Pedestrianisation was due to be London Mayor Sadiq Khan’s transport legacy of the first term – £8m was spent by TfL drawing up the plans.

There the original plan has died as the road is owned by Westminster Council.

The council reversed its support of the scheme after opposition from residents who feared traffic displacement. They had threatened to stand as independents in the local elections.

There will now be two pedestrian piazzas although traffic will still run along Oxford Street. 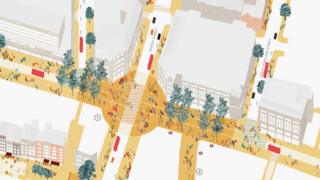 Richard Beddoe from Westminster Council said it had to listen to the reaction in the consultation. He believes the council had to ditch the mayor’s plan as it only focused on one street and not the wider area.

Privately, City Hall was fuming at that decision.

Whatever route authorities take, they can’t please everyone.

The question is, who do they listen to? Residents, workers or drivers? Or is it really about compromise?

Where the balance lies often comes down to political interpretation.

You can see more on the politics of pedestrianisation on Sunday Politics London at 11:00 GMT on 28 October.