Home / Other News / ‘We have a duty to act’: hundreds ready to go to jail over climate crisis

‘We have a duty to act’: hundreds ready to go to jail over climate crisis

the guardian) Rowan Williams backs call for mass civil disobedience ‘to bypass the government’s inaction and defend life itself’ Last modified on Fri 26 Oct 2018 23.01 BST Letter: Facts about our ecological crisis are incontrovertible. We must take action A new group of “concerned citizens” is planning a campaign of mass civil disobedience starting… [Read More]

A new group of “concerned citizens” is planning a campaign of mass civil disobedience starting next month and promises it has hundreds of people – from teenagers to pensioners – ready to get arrested in an effort to draw attention to the unfolding climate emergency.

The group, called Extinction Rebellion, is today backed by almost 100 senior academics from across the UK, including the former archbishop of Canterbury Rowan Williams.

In a letter published in the Guardian they say the failure of politicians to tackle climate breakdown and the growing extinction crisis means “the ‘social contract’ has been broken … [and] it is therefore not only our right, but our moral duty to bypass the government’s inaction and flagrant dereliction of duty, and to rebel to defend life itself.”

Those behind Extinction Rebellion say almost 500 people have signed up to be arrested and that they plan to bring large sections of London to a standstill next month in a campaign of peaceful mass civil disobedience – culminating with a sit-in protest in Parliament Square on 17 November.

Roger Hallam, one of the founders of the campaign, said it was calling on the government to reduce carbon emissions to zero by 2025 and establish a “citizens assembly” to devise an emergency plan of action similar to that seen during the second world war.

On top of the specific demands, Hallam said he hoped the campaign of “respectful disruption” would change the debate around climate breakdown and signal to those in power that the present course of action will lead to disaster.

“The planet is in ecological crisis – we are in the midst of the sixth mass extinction event this planet has experienced,” he said. “Children alive today in the UK will face the terrible consequences of inaction, from floods to wildfires, extreme weather to crop failures and the inevitable breakdown of society. We have a duty to act.”

Extinction Rebellion is part of the Rising Up activist group, and organisers have spent the past few months holding public meetings in towns and cities across the country. 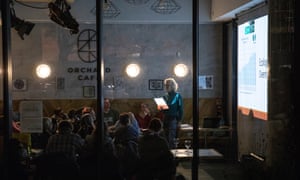 An Extinction Rebellion talk in London this week. Photograph: David Levene for the Guardian Hundreds of people have gathered in libraries and meeting halls, cafes and universities, pubs and churches to hear dire warnings about the consequences of the unfolding climate emergency – and what they can do about it.

“It feels like we are tapping into something very powerful in terms of the frustration and urgency many people are feeling as the evidence mounts of the scale of the climate emergency we are facing,” said Hallam, an academic at King’s College who specialises in social change and protest. He said the group was now getting 20 requests a week from people across the UK wanting to be given the talk.

“To put it simply,” he said, “we’re fucked. From the melting ice in the Arctic to the release of methane from the permafrost, the evidence is overwhelming and people are starting to realise that. What we need now is to start working out what we are going to do about it.”

The attempt to organise wide-scale civil disobedience around the looming climate breakdown comes just weeks after three people were jailed – and then released – for anti-fracking campaigns in the UK. And it follows dire warnings from the UN that there are only 12 years left to prevent global ecological disaster.

Almost 100 academics – half of them professors – on Friday backed the call for rebellion.

In a letter to the Guardian they state: “While our academic perspectives and expertise may differ, we are united on this one point: we will not tolerate the failure of this or any other government to take robust and emergency action in respect of the worsening ecological crisis. The science is clear, the facts are incontrovertible, and it is unconscionable to us that our children and grandchildren should have to bear the terrifying brunt of an unprecedented disaster of our own making.”

Last week the US politician Bernie Sanders posted a link to an article supporting Extinction Rebellion, civil disobedience and the wider anti-fracking campaign to his 7.5 million followers. Hallam said the group was in talks with campaigners in the US about organising similar Extinction Rebellion events in Washington DC next month.

Caroline Lucas, the Green party MP, is also supporting the plan and will be among the speakers at the launch in parliament next week.

As part of their attempt to mobilise the wider environmental movement, activists from Extinction Rebellion, armed with flowers and letters, occupied Greenpeace headquarters last week. Describing the move as a “tap on the shoulder of a friend”, they wanted the environmental organisation to email its members highlighting the rebellion plan – and ideally calling on them to take part.

After two hours of “friendly discussions” the group left. Greenpeace subsequently said that although it supports any attempt to raise awareness of the climate emergency it does not know enough about those behind Extinction Rebellion to ask its members to take part.

But Hallam remains undeterred. The planned rebellion will begin with a declaration of demands being pinned to parliament next week and reach its peak with a peaceful sit-down protest in Parliament Square on 17 November. “After that, who knows,” he added.

At the end of another organising meeting in a cafe on a west London estate this week, Hallam acknowledged it is impossible to say exactly what will happen. How many of those who have signed up will actually turn up on the day? Will those who say they are prepared to get arrested and go to prison buckle when faced with police telling them to move? Will hundreds more supporters turn up unannounced?

Looking around the bustling cafe, where about half of the 30 people in attendance are signing up to take part, Hallam said: “In the end we have to realise that we will all be alone on our deathbed and asking ourselves whether we lived a worthwhile life – and for this generation the climate crisis is the overriding existential challenge. There are no guarantees but doing nothing, not trying, is not an option.”

‘If we fail you, it wasn’t for lack of effort’ 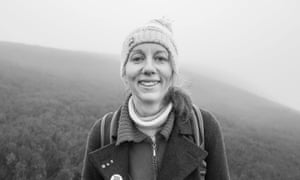 Gail Bradbrook, scientist and veteran of tax justice campaigns and the Occupy movement

“For years I have engaged with this ecological crisis on an intellectual level, the mounting evidence, the science … but now I have engaged with the potential destruction of this world on an emotional level and there is a fundamental difference. There is huge feeling of grief, of loss. I found myself bursting into tears, of feeling distant with longstanding friends … but as with other forms of grief, as the poets say, you start to come through that initial shock and feeling of loss and there is a renewed appreciation of the beauty of the world, a renewed realisation that we are connected.

Once you face and feel the shock of what we are facing, if you are willing to face the grief and can process those feelings, there is tremendous energy and a will to do what it takes. So that is what we have been asking people, to be willing to look at the truth of our predicament and grieve.