Home / Other News / She trolled Trump, but can she lead a green wave across Europe?

She trolled Trump, but can she lead a green wave across Europe?

Swedish minister Isabella Lövin found fame in a jibe aimed at the White House. Now she aims for change beyond Twitter 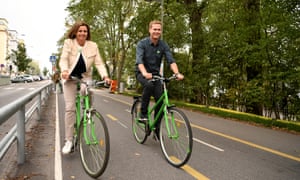 In February last year, a week after Donald Trump had signed an anti-abortion executive order surrounded by seven men, Isabella Lövin posted a photograph of herself on Twitter signing a climate change bill alongside seven other women.

Sweden’s then deputy prime minister remained enigmatic as the picture went viral and she was asked whether she had been “trolling” the US president. “It is up to the observer to interpret the photo,” she was quoted as saying. “We are a feminist government, which shows in this photo.”

The image made headlines around the world and, nearly two years on, is still what Lövin is best known for internationally. But the Swedish Green party leader and minister for international development is no mere social media politician. During her party’s historic first period in government she relentlessly pushed through an exhausting list of more than 50 policies, including a flight tax, the so-called Swedish Proposal, which tripled the price of EU emissions credits, and the carbon law she was signing in the picture that went viral.

Lövin is one of the leading figures in what she says is a resurgence in environmentally conscious politics across the continent. “There is a green wave going on in Europe, in Germany, Luxembourg and Belgium, and in Finland as well,” she says. “I’m convinced that green parties offer a positive vision, and also the willingness to take on the huge challenges that we see in the world right now.”

The slogan on her Twitter profile, “The climate can’t wait”, sums up the Lövin approach.

“We’ve been very focused on results, and many of these issues have beenfundamental, long-term policies,” she says, sitting in her office in Sweden’s foreign ministry.

“To work seriously on changing policies and setting long-term targets, and forming majorities and doing agreements with other parties, those things don’t pay off very easily in PR strategies.”

It’s the same single-mindedness she as shown ever since bursting into public life 10 years ago following the 2007 publication of Silent Seas – The Fish Race to the Bottom, a rigorously researched, dramatic exposé of the crisis in global fisheries.