The need to act now to avoid catastrophic climate change

the guardian) Letters Wed 21 Nov 2018 Gwen Harrison explains why she has become a law-breaker and Sue Tytler suggests other ways of saving the world On Monday last week I was arrested for gluing myself to the Department for Business, Energy and Industrial Strategy in London. On Saturday I risked further detention by illegally… [Read More] 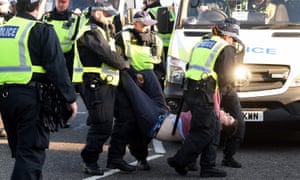 On Monday last week I was arrested for gluing myself to the Department for Business, Energy and Industrial Strategy in London. On Saturday I risked further detention by illegally occupying Lambeth Bridge, along with hundreds of others, as part of Extinction Rebellion’s campaign of mass civil disobedience (Report, 19 November). Why?
Scientists warn that the sixth mass extinction is now under way, that the survival of human civilisation itself is threatened, and that we have only a few short years in which to act. The UN also warns that we have just 12 years to avoid catastrophic climate change. The science is clear – we’re heading for an existential crisis.

Until last week I was an ordinary, law-abiding citizen. I’ve tried to drive change through all the normal channels – making lifestyle changes, lobbying politicians, being active in the Green party, and even standing for election. These things are crucial, and I’ll continue to do them, but they’re no longer enough. I now believe that non-violent direct action and mass civil disobedience are both necessary and urgent. I’ve become a law-breaker. I’ll continue to get arrested and I’ll go to prison if I must.

When my beautiful, innocent little niece grows up, enthralled as she is by the natural world, I can’t face her, knowing that I sat back passively and allowed its destruction. Along with thousands of others I’m now willing to sacrifice my freedom in an attempt to draw attention to this emergency, and to force our government to act immediately and radically.
Gwen Harrison
Kendal, Cumbria

• Climate change experts are doing all they can to keep our somnolent world leaders supplied with industrial quantities of strong black coffee. As you report, on its current trajectory, the planet will overshoot the 1.5C target set by the IPCC (Russia, Canada and China threaten to warm world by 5C, 17 November).

The common denominator of mass extinctions is rapid change. It’s not the rise in average global temperature that is of concern, or the level of atmospheric carbon dioxide. It’s the rate at which these things are changing, in a sliver of time so infinitesimally small, on a geological timescale, it is virtually unquantifiable.

If scientists’ worst fears are realised, and the 5C-6C barrier is breached, humanity will kickstart a runaway mass extinction event that could dwarf even the “mother of mass extinctions” about at the end of the Permian, 250m years ago, when virtually all life on Earth was snuffed out.

Have you smelt that coffee yet? Good. Now that I have your full attention, read on. There’s still time. Just about. So lobby your MP, sign online petitions calling for climate change action, donate to environmental pressure groups, and take part in protests. Above all, think carefully about which political party will get your vote. We can do this thing, people. We can save the world. What are you waiting for? Why are you still reading this? Let’s roll.
Sue Tytler
Thurston, Suffolk