Home / Other News / Sep 2018 ‘For me, this is paradise’: life in the Spanish city that banned cars

Sep 2018 ‘For me, this is paradise’: life in the Spanish city that banned cars

the guardian) In Pontevedra, the usual soundtrack of a Spanish city has been replaced by the tweeting of birds and the chatter of humans Stephen Burgen Tue 18 Sep 2018 Calle Mellado before and after the implementation of the scheme. Photograph: Concello de Pontevedra People don’t shout in Pontevedra – or they shout less. With… [Read More]

In Pontevedra, the usual soundtrack of a Spanish city has been replaced by the tweeting of birds and the chatter of humans 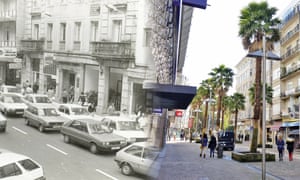 Calle Mellado before and after the implementation of the scheme. Photograph: Concello de Pontevedra

People don’t shout in Pontevedra – or they shout less. With all but the most essential traffic banished, there are no revving engines or honking horns, no metallic snarl of motorbikes or the roar of people trying make themselves heard above the din – none of the usual soundtrack of a Spanish city.

What you hear in the street instead are the tweeting of birds in the camellias, the tinkle of coffee spoons and the sound of human voices. Teachers herd crocodiles of small children across town without the constant fear that one of them will stray into traffic.

How can it be that private property – the car – occupies the public space?

“Listen,” says the mayor, opening the windows of his office. From the street below rises the sound of human voices. “Before I became mayor 14,000 cars passed along this street every day. More cars passed through the city in a day than there are people living here.”

Miguel Anxo Fernández Lores has been mayor of the Galician city since 1999. His philosophy is simple: owning a car doesn’t give you the right to occupy the public space.

What is Walking the City week?

As cities around the world close central streets to cars to mark World Car-Free Day, Guardian Cities is looking at the joys and trials of urban walking.

The US humourist and writer David Sedaris tells us about walking in cities from Raleigh to Reykjavik. Will Self explains what he learns from perambulations in London, there’s Fran Lebowitz in New York, Helen Garner in Melbourne, “natural navigator” Tristan Gooley in Portsmouth, and writers on Delhi and Newcastle, Cairo and Wellington.

Laura Laker casts a critical eye on the performance of Vision Zero, the global city scheme to eliminate traffic deaths. London has signed up – will it enjoy the success of New York, or the delays of LA? The recent blocking of Sadiq Khan’s plans to pedestrianise Oxford Street does not bode well.

Correspondent Stephen Burgen samples the newfound silence in the Spanish car-free city of Pontevedra, and Matthew Keegan discovers what prompted Hong Kong to reopen a popular pedestrian street to vehicles.

Renate van der Zee looks at the rise, fall and rebirth of the Lijnbaan in Rotterdam – Europe’s first pedestrianised street – while Rachel Aldred at the University of Westminster crunches the numbers to identify the most dangerous London boroughs for people on foot.

Oliver Wainwright explores the City of London’s forgotten Pedways – and asks whether these 1960s walkways can make a comeback.

We consider the phenomenon of “desire lines”, examine the art of following a stranger in the hope of seeing a city in a new light, and much more.

Lores became mayor after 12 years in opposition, and within a month had pedestrianised all 300,000 sq m of the medieval centre, paving the streets with granite flagstones.

“The historical centre was dead,” he says. “There were a lot of drugs, it was full of cars – it was a marginal zone. It was a city in decline, polluted, and there were a lot of traffic accidents. It was stagnant. Most people who had a chance to leave did so. At first we thought of improving traffic conditions but couldn’t come up with a workable plan. Instead we decided to take back the public space for the residents and to do this we decided to get rid of cars.”