Diesel cars older than 15 years will be barred next year as first part of anti-pollution drive Fri 3 May 2019 Authorities say pollution is shortening the life expectancy of Amsterdammers by a year. Photograph: Alamy Cars and motorbikes running on petrol or diesel will be banned from driving in Amsterdam from 2030. The city’s… [Read More] 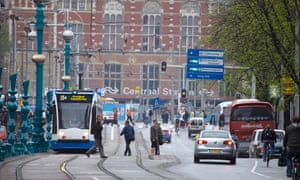 Authorities say pollution is shortening the life expectancy of Amsterdammers by a year. Photograph: Alamy

Cars and motorbikes running on petrol or diesel will be banned from driving in Amsterdam from 2030.

The city’s council plans to phase in the change as part of a drive to clean up air pollution, which the authorities blame for shortening the life expectancy of Amsterdammers by a year.

“Pollution often is a silent killer and is one of the greatest health hazards in Amsterdam,” said the councillor responsible for the city’s traffic, Sharon Dijksma, announcing the municipality’s decision.

From next year, diesel cars that are 15 years or older will be banned from going within the A10 ring road around the Dutch capital.

Public buses and coaches that emit exhaust fumes will no longer enter the city centre from 2022. By 2025, the ban will be extended to pleasure crafts on its waters, mopeds and light mopeds.

All traffic within the built-up area must be emission-free by 2030 under the Clean Air Action plan.

The city plans to encourage its residents to switch to electric and hydrogen cars by offering charging stations to every buyer of such a vehicle. It is hoped that the second-hand electric car market will blossom in the coming years.

In large part due to heavy traffic in the cities of Amsterdam, Maastricht and Rotterdam, air pollution in the Netherlands is worse than European rules permit. There are concerns that the levels of nitrogen dioxide and particle matter emissions are causing respiratory illnesses.

But the Rai Association, the automotive industry’s lobby group, condemned the plan as bizarre and regressive. A spokesman said: “Many tens of thousands of families who have no money for an electric car will soon be left out in the cold. That makes Amsterdam a city of the rich.

“In 2030, about one third of the cars will be electric, we expect. But there will also be a lot of people who won’t be able to afford that by then.”

In January 2018, the Dutch health council called on the government to devise an ambitious strategy to improve air quality in the Netherlands, warning that the “blanket of pollution” would cause major health problems in the country.

City authorities and governments around the world are moving towards pushing cars that produce greenhouse gas emissions off their streets.

The Danish government has said it wants to ban the sale of new petrol and diesel cars from 2030 and hybrid vehicles from 2035.