Home / Other News / The Guardian view on extinction: time to rebel | Editorial | Opinion | The Guardian

The Guardian view on extinction: time to rebel | Editorial | Opinion | The Guardian

the guardian) Tue 7 May 2019 A million plant and animal species are under threat. Humans are largely to blame – but we will pay the cost too Coral bleached white by ocean warming in New Caledonia. Photograph: AP We humans pride ourselves on our ability to look beyond immediate concerns and think on a… [Read More]

Tue 7 May 2019
A million plant and animal species are under threat. Humans are largely to blame – but we will pay the cost too 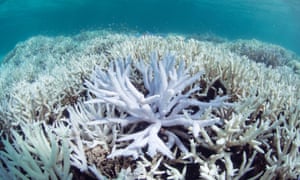 We humans pride ourselves on our ability to look beyond immediate concerns and think on a grander scale. While other creatures preen for mates, hunt prey or build homes, only humans ponder the nature of time, explore our place in the universe or are troubled by the question of what wiped out the dinosaurs. Yet we are often poor at focusing on and understanding the things which really matter. A new mass extinction is under way, and this time we are mostly responsible. The new UN Global Assessment Report warns that a million plant and animal species are at risk of being wiped out.

Most of us find it impossible to visualise such a large number. Focusing on individual cases is only partially helpful. Plenty of tears are shed for charismatic megafauna such as rhinos when they are driven to the brink. Fewer know or care that two in five amphibian species are under threat. Phytoplankton drifting in the ocean are barely noticed at all, but absorb carbon dioxide as well as being eaten by zooplankton, which in turn are eaten by larger creatures, in turn eaten by ourselves.

It took only a century for humans to discover the dodo and drive it to extinction. But annihilation is now too speedy and commonplace for us to even recognise each species: we are sending creatures to their deaths before we know what they are. In many more cases species will survive, but in far tinier numbers. The biomass of wild animals has fallen by 82%; hedgehog populations in the British countryside halved in the last half-century.

In contrast, our own population soars, and so does its consumption. Climate change is one of the major causes of this catastrophe, bleaching corals and damaging habitats. Any sensible strategy must consider them together, as an environmental emergency. But there are also specific challenges to wildlife, including the replacement of forests by fields of cows; overfishing; the impact of pesticides and fertilisers; the pollution of air and water and soil; and the spread of plastics through our oceans and food chains.

Government leaders must press this issue by raising it personally instead of leaving it to ministers; Emmanuel Macron has pledged to do so when he hosts the G7 summit this year. They should start now: next autumn, countries will meet in China for a UN conference on biodiversity, setting new targets. There has been shamefully slow progress towards the existing ones, drawn up in Japan in 2010, though there have been some successes. The US never even ratified the convention on biological diversity, hindering its chances of gaining traction. The best hope of progress there is perhaps through a version of a Green New Deal incorporating biodiversity.

There are already signs of a shift in thinking. A new OECD report makes a bold call for taxes on wildlife-degrading companies, and the diversion of finance to biodiversity-boosting projects rather than damaging ones; fossil fuel companies and agribusiness continue to receive vast subsidies. Many believe a more radical rethinking of our economic model is needed.

Real change will require a depth of imagination, ambition and sheer determination which humans have historically struggled to muster. Yet if we cannot summon the required concern for a million species, we could at least focus on one: our own. We may not be charmed by Earth’s 5.5 million insect species, but we need them to pollinate crops, disperse seeds and break down waste to enrich the soil. Through ignorance, greed, laziness and simple lack of attention we are wiping out the very creatures upon whom we ourselves depend.