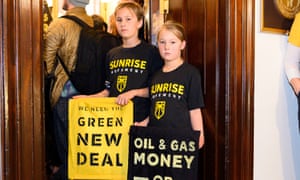 America elected Donald Trump at the end of the hottest year ever recorded, without debate moderators asking him a single question about global warming.

But after three years of record temperatures, devastating wildfires and some of the most destructive hurricanes in US history, the media is facing new pressure – often from the candidates themselves – to give the subject more prominence during the 2020 election.

Yesterday, MSNBC devoted more than five minutes to Beto O’Rourke’s rollout of a $5tn climate plan, calling climate a “kitchen table issue” for 2020. Jay Inslee, the Washington governor who is seeking to make climate change the central thrust of his campaign, is calling on the Democratic National Committee to host a debate solely focused on climate. Bernie Sanders raised the issue during his town hall on Fox News earlier this month – and even drew cheers from the audience when he talked about new jobs in the renewable energy sector. Rising temperatures and the crisis they pose for humans were part of every Democratic candidate’s pitch during CNN’s marathon of hour-long town halls last week.

In the run-up to 2020, as newsroom leaders grapple with their mistakes in the 2016 election – from reliance on inaccurate polls to underestimating the impact of fake news – the failure to press candidates on climate change is emerging as an area of self-examination.

“In 2016 there were almost no questions asked , which is insane,” says Tony Bartelme, a senior reporter who covers climate change for the Post and Courier in Charleston, South Carolina. “It’s a good start that we’re starting to hear questions for 2020.”

The Guardian is joining forces with Columbia Journalism Review and the Nation to launch Covering Climate Change: A New Playbook for a 1.5-Degree World, a project aimed at dramatically improving US media coverage of the climate crisis. The project kicks off today with an event at Columbia Journalism School featuring CJR’s editor-in-chief, Kyle Pope, the Nation’s environment correspondent, Mark Hertsgaard, and the Guardian climate columnist Bill McKibben.

The Green New Deal – progressives’ vision for slowing climate change without further burdening the poor – has also helped catapult the subject into the 2020 conversation. In March, MSNBC’s Chris Hayes took the highly unusual step of devoting an hour to the idea, in a show featuring the New York congresswoman Alexandria Ocasio-Cortez.

But even as there are signs that airtime for climate is beginning to increase, questions remain about the depth and quality of the coverage. “I don’t see the media paying much attention to differentiating how serious each candidate is on the climate question,” said David Gelber, the creator and executive producer for the Showtime series on climate change, Years Of Living Dangerously.

More Americans than ever are worried about climate change. A poll of likely Democratic caucus-goers in Iowa ranked climate change about on par with healthcare as the top issues they want candidates to talk about.

Research indicates that major national newspapers are beginning to pay more attention to climate – but local publications and TV news haven’t kept up. The major broadcast networks – ABC, CBS, NBC and FOX – spent just 142 minutes on climate change last year, according to one calculation from the progressive group Media Matters. And about half of Americans hear about global warming in the media once a month or less, according to surveys by climate communications programs at Yale and George Mason universities.

Meanwhile, five major national US newspapers – the Washington Post, the Wall Street Journal, the New York Times, USA Today and the Los Angeles Times – have, in aggregate, roughly tripled their coverage of climate change since four years ago, according to the Media and Climate Change Observatory at the University of Colorado in Boulder.

The New York Times nowhas a desk of about a dozen covering climate. Climate editor Hannah Fairfield said the team is collaborating with the politics desk to report on the 2020 candidates’ climate positions.

But climate coverage is not just a question of volume– it’s also a question of approach. We spoke to experts in the field for their advice on how news outlets should cover climate in ways that make voters listen during the 2020 race.

Adam Berinsky, who studies why some people believe political rumors – such as that climate change is a hoax – said people who buy into political rumors are driven by a “combination of conspiratorial dispositions and political motivations”. They are more likely to change their minds if they hear from sources they identify with, often fellow conservatives.

Aaron McCright, a sociology professor who studies public opinion at Michigan State University, said journalists should give the small but growing numbers of conservatives who care about climate change “more of a mouthpiece so that their message could start competing” with science denialism.

Republicans who want to limit climate pollution for the sake of national security or as part of a plan for energy independence need to compete better with climate deniers, said McCright. “Those could be effective messages if they’re promoted hour by hour, day by day, week by week, by dozens or hundreds of conservatives in everyday life, TV, papers, Congress.”

Bring up climate, even when the candidates don’t

Gelber says reporters should bring the campaign story back to climate change, even if the candidates aren’t discussing their proposed solutions. He said they should help audiences differentiate between the candidates, explaining to viewers and readers how specific they have gotten in their plans. 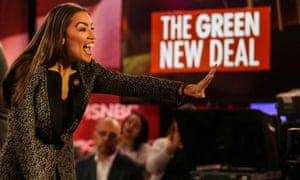 Bartelme suggests trying to connect local catastrophes to the climate story and explain why the extreme weather is happening.

“What we can do is make those connections for people,” Fairfield said. Reporters can seek out “local stories that have climate fingerprints on them”.

Elizabeth Arnold, a longtime reporter and professor at the University of Alaska, argues that “doom and gloom” coverage alone may force the public to disengage.

“Repetition of a narrow narrative that focuses exclusively on the impacts of climate change leaves the public with an overall sense of powerlessness,” she said in an introduction to one paper.

The Guardian is partnering with Columbia Journalism Review and the Nation today on “Covering Climate Change,” a town hall event with media leaders about how to change the media narrative on climate change. Watch the event live here between 9am and 2pm.