Low Traffic Neighbourhoods (LTNs) are a key element in Transport for London’s Streetspace plan to create more space for people to walk or cycle in London in the aftermath to Covid-19. LTNs are networks of streets where through motor vehicle traffic has been removed or reduced – so only residents and a few deliveries and services have access – streets where children play out, neighbours catch up, air pollution is lower, and walking and cycling are the natural choice for everyday journeys. Say why they are necessary – people will be avoiding PT after Covid, satnav systems don’t respect residential streets, ….

You can read more about LTNs and how they are best achieved in two briefing documents produced jointly by the London Cycling Campaign and London Living Streets and in this Design Guide produced by Sustrans.

At the start of the Streetspace initiative in May 2020 Camden quickly installed five point closures for motor traffic that brought about substantial traffic reductions. Following some adjustments and additional closures they have resulted in the five new LTNs shown in the map below. They are all on the small side, with areas ranging from 0.05 t0 0.150 km2. An area in the range 0.5 to 1.5 km2 is generally more effective because it enables access to a large set of local resources such as schools, parks, shops and public transport by walking for 15-20 minutes in safe and pleasant conditions without any need to cross major roads.

The new LTNs in Camden were created by the installation of bollards in Savernake Road (1 filter), Hartland Road (3 filters), Prowse Place (1 filter), Wilmot Place (1 filter) and Red Lion Street (1 filter). A further point closure in Sandall Road produced a substantial reduction of traffic but there is still too much non-local traffic cutting through streets in this residential area to classify it as a LTN. Further filtering in that area could produce a very valuable 0.7 km2 LTN that would be particularly useful for school journeys on foot or by bike. 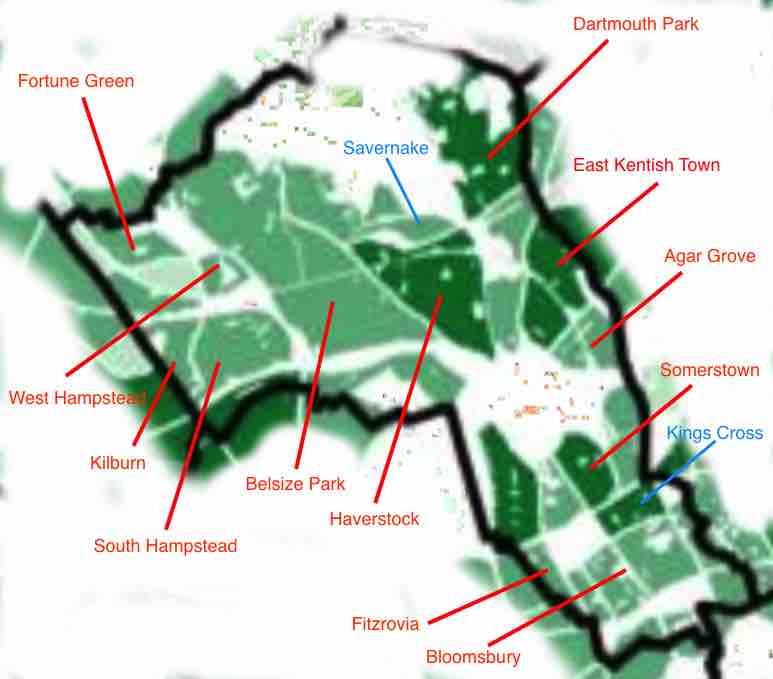 There is however scope for a lot more to be done.