Improving ‘permeability’ for cycling consists mainly of making one of the following exceptions for cycles:

Larger Map. The Google Sheet on which it is based is here.  And for people who can’t access Google Docs, a PDF is here.

The category ‘noentry-exception’ (light green) applies to “false one-way streets” which have No Entry at one end although vehicles are allowed to travel in both directions.  In these cases there is often a short stretch of one-way road close to the No Entry. There are several examples on the east side of Kentish Town Road e.g. Gaisford Road and Islip Street.

We have also included former one-way gyratories that have reverted to two-way working – shown in blue and called ‘twoway’. The first example was Russell Square and more recent examples are Tottenham Court Road and Gower Street – Bloomsbury Street. Although these schemes applied to motor vehicles they were also very beneficial to cycling.

Cyclists also benefitted in a similar way when they were given access to the Bloomsbury Way contraflow bus lane.

We also have new paths shown in dark green. The most important example is the Agar-Camley link.

The interactive chart below shows the number of permeability measures built each year. (It is based on the chart in the Google Sheet). Roll the cursor over the data points to see the value of the counts. 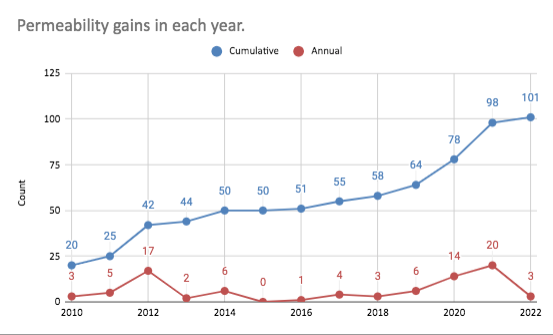