Six mayoral candidates arrived to speak at the hustings, held in a ‘room with a view’ over London at the top of the News UK building above London Bridge station. The only one missing was George Galloway. 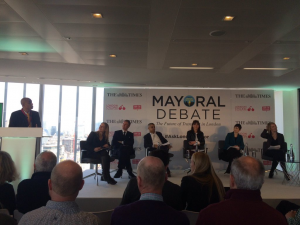 After being welcomed by Ashok Sinha, LCC’s Chief Executive, the proceedings were chaired by Emma Tucker, Deputy Editor of The Times. Each candidate (in alphabetic order) gave a brief two-minute presentation. First up, therefore, was Siân Berry (Green) who recognised that cycling is key to making an efficient transport system in London; it is cheap, healthy, and non-polluting. She acknowledged that planning for cycling must involve communities and cyclist more satisfactorily and committed to spending 15% of TfL’s budget on cycling.

Zac Goldsmith (Conservative) pledged to maintain the same level of funding as Boris, to produce safe segregated cycle superhighways. He too mentioned the need to work with communities when planning cycle routes (although he didn’t mention CS11, he is well aware of the antagonism this has aroused) and said he intended to get HGVs off London’s roads by using consolidation centres and increasing the use of rail and water to transport goods. He plans to integrate Oyster cards with the cycle-hire scheme and to extend cycle-hire to outer London.

For Sadiq Khan (Labour) the most important points for cycling were to improve cyclists’ safety, its contribution to reducing air pollution and its economic value because tubes and trains are already at capacity and only cycling has the capacity to keep London moving. He saw London as a cycling capital.

Caroline Pidgeon (Liberal Democrat) said that we need three times more protected cycle lanes than we have at present and she would increase cycling investment to 3% of TfL’s budget by 2020; this would provide a mini-Holland in every borough. She would prohibit HGVs at peak times and insist on Direct Vision lorries. The congestion charge would be increased and office parking restrictions would be tightened to deter motorists. She also argued that more spoil from construction projects should be removed by river, reducing the need for lorries.

Sophie Walker (Women’s Equality) pointed out that in London only one quarter of cyclists are women; the proportion of women cyclists is an indicator of the quality of cycling infrastructure. In Denmark and in Cambridge half the cyclists are women. She aims for more inclusive cycling, with more opportunities for cyclists with disabilities and for children. She argued for more imaginative use of data to examine the impact of investment in cycling on women’s experiences.

Peter Whittle (UKIP) was refreshingly unpretentious in his aims: to expand the cycle-hire scheme; to build a new cycle & pedestrian bridge in the Woolwich area and to scrap the Garden bridge (to applause from the audience); to double the congestion charge for Private Hire Vehicles (they make up 10% of cars in London) and to scrap HS2.

The chair then put questions to the candidates. A selection of these is included:

Asked how he would find the money to spend more on cycling, Sadiq Khan replied that he would review TfL’s business plans but couldn’t put a figure on how much this would save; he saw TfL as a flabby organisation which had made a number of uneconomic or wasteful orders.

Caroline Pidgeon pointed out that it was unrealistic to consider transport funding without considering fares; she proposed a one-hour bus ticket and cheaper ‘early-bird’ fares before 7.30; this is one of the few policies with a redistributive impact. She also pointed out that the cycling budget had been underspent every year for the last four years. She wanted to increase the congestion charge at different times of day.

On the issue of air pollution, Sadiq claimed that by 2020 all buses would be electric or hydrogen-fuel. The ULEZ should be expanded and brought forward and motorists should be given incentives to drive ‘clean’ cars. Siân wanted the ULEZ to cover the whole of London.

In response to whether 20mph zones should be extended London-wide, the candidates were split: Zac, Peter and Sophie were happy to leave this to local boroughs (producing a patchwork across London), while Sadiq, Caroline and Siân wanted it to be London-wide.

What didn’t the candidates say:

No mention of pedestrianising Oxford Street.

Practically no mention of Quietways. They talk about Superhighways.

Nothing about cycling improvements in Outer London except mini-Hollands.

Bridges only mentioned in relation to river crossings. What about a bridge over the North Circular? Have they not seen beautiful Dutch cycle bridges?

No mention of children cycling to school or for fun, on their own or in families.

They know the buzz-words – cycle superhighways, mini-Hollands, lorry-danger, segregation – but few of them really appreciate the advantages of people-friendly streets (the phrase used by Siân Berry) and the benefits of opening up the opportunities for cycling for everyone, everywhere.