St Pancras International is not on the London Cycle Network (LCN) despite being a key trip generator. For most people the only way to reach it by cycle is along the busiest and largest roads in central London.

An informal route along quiet streets does in fact already exist, linking the station directly to the orbital LCN route 0, the “Stations Circular Route”. Minor changes – direction signs, facilitating two-way cycling (to make the route shorter  and more legible) and resurfacing – would create good connections for cycles to Paddington, Waterloo, Blackfriars and Liverpool Street stations besides providing a western cycle bypass to the King’s Cross gyratory. If combined with the Camley Street link this would form a whole new cycle route along quiet streets between Kentish Town, Bloomsbury and on to Blackfriars.

The enhancement of this link was recommended in the final Report on the A201 CRISP study (TfL, August 2005). (See Data Sheet CAMISL02, which allocates funding for the purpose). However, it appears that TfL has not done anything to chase up this work package with Camden.

The section of Route 0 in Camden runs parallel to the Euston Road and is shown by a blue line on the map below. 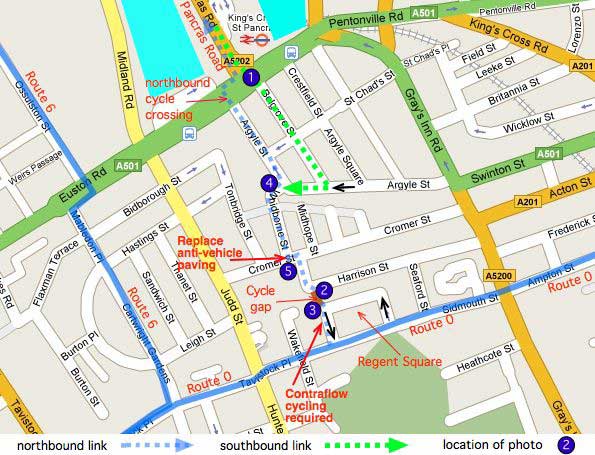 A northbound link is shown on the maps as a broken blue line: it is facilitated by the cycle gap linking Regent Square and Harrison Street and by the northbound cycle crossing on Euston Road from Argyle Street to Pancras Road. Regent Square is one-way anticlockwise, so contraflow cycling is required on the western side. Although this link is in regular use, there are no direction signs along it.

The photo on the right (1 on map) shows the cycle crossing from Argyle Street to Euston Road – it provides a gap through the central railings. Cyclists using this crossing when the signal is green can go over Euston Road and turn right to access the ASL box at the junction with Pancras Road; meanwhile eastbound vehicles on Euston Road are held back to enable this manoeuvre. As the photo shows, the post in the middle of the cycle gap reduces its width below 1.5m, reducing capacity and preventing trailers, disability trikes and other wide cycles from crossing. The photo on the left (2) shows part of the cycle link between Regent Square and Harrison Street. Camden Council has put up a sign telling cyclists to stick to the path but without realising the probable reason for riding on the footway: the entry from Regents Square is paved with very rough granite setts which are very uncomfortable to ride over (see photo on the right (3) which also shows a big pothole). A walking sign usefully indicates the route to Kings Cross and St Pancras Stations.

The southbound route crosses from Pancras Road into Belgrove Street. It follows Belgrove Street and then turns right on Argyle Street as far as the junction with Whidborne Street. However, enabling contraflow cycling, perhaps by removing the one-way restriction
entirely, on the section of Argyle St between St Chad’s St and Whidborne St would shortern the southbound route. Although cyclists are regularly using this link in both directions due to the effectiveness of the two crossings over Euston Road, further modifications are needed to make it work really well.

The eastern end of Argyle Street already has a cycle only entry point at its junction with Gray’s Inn Road: it would be helpful to have cycling
direction signs to St Pancras and beyond from here Junction of Cromer and Harrison Streets

The photo on the left (5) shows the junction of Cromer and Harrison Streets ( Click here to see a larger copy of the photo): this location has a history: when the fire gate had been broken a few times, a Camden officer replaced it by with the post and anti-vehicle paving. A local resident then persuaded him to mark a cycle route on the footway because other locals were complaining about cyclists going that way.
This should be remedied by replacing the anti-vehicle paving with a normal road road surface. The no entry sign should be replaced by a “no motor vehicles sign”.

Requirements for establishing this link

1) Directional signage in both directions between Pancras Road and Regent Square.

2) Provide two-way cycling on the west side of Regent Square and in the short section of Argyle Street between Belgrove Street and Whidborne Street, for example, as a “false” one-way street.

3) Indicate that cyclists can cycle southbound through Whidborne Street.

4) Remove the bollard in the Argyle Street cycle gap.

5) Improve the surfaces at the entry to the Regent Square – Harrison Street cycle gap.

6) Replace the anti-vehicle surfacing at the junction of Cromer and
Harrison Street with normal paving and changing the “no entry” to a “no motor vehicles” sign.

All of this work was completed within six months, apart from two-way cycling in Regent Square. A consultation on two-way working was rejected by local residents in early 2010. At last, in February 2012, two way cycling was put into Regents Square together with other one way streets between here and Euston Road. See account.