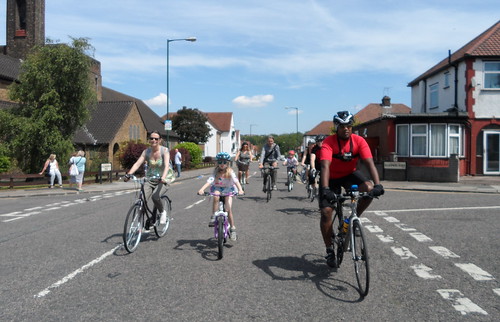 This ride was initially developed for beginners. Last year (2013) it followed a basic cycle training course at Sidings Community Centre in West Hampstead in April and, despite the cold, the beginners enjoyed the leisurely ride around three parks local to Kilburn.

This year the ride was still advertised as a beginners’ ride but it was a much more pleasant, warm, sunny day. I was surprised at how many experienced cyclists turned up at Sidings. We picked up another couple, mother and daughter, en route, which made the group 14 in total, and then rode on to the first and largest of the three open spaces, Gladstone Park.

The park was opened in 1901 and named after the Liberal Prime Minister who had a house there. We sat on the bricks showing the outline of the house where the Gladstone spent many happy hours back in the 19th century. Mark Twain, the American author of Huckleberry Finn, also stayed there. Gladstone loved trees and the park features many tree lined avenues.

Spanners and hex keys were found to make adjustments to the heights of a couple of saddles to make their riding positions more comfortable.

Gladstone Park allows ‘Responsible Cycling’ so we circumnavigated the large park and came out of the same entrance we came in. We decided to alter the route from last year to avoid the busy Dudden Hill Lane. A few quiet roads and a pathway under the railway led us to cross Willesden High Road and back on to quieter roads leading down to our second stop.

Roundwood Park opened six years before Gladstone Park in 1895 and was designed by the same man, Oliver Claude Robson. Again we were able to cycle the peripheral pathways and stop at the café for some well-earned refreshments. It was so good to sit in the garden area of Lodge Café and chat with friends while friends while having a drink..

Roundwood Park has a small aviary. On the way out we were able to show the kids canaries, budgerigars and Cockateils.

While reconnoitring the ride this year I noticed another large green area on the map and went to investigate. I found King Edward II Park which is attached to Willesden Leisure Centre. Although not on the itinerary, by mutual consent we decided to circumnavigate this large open space before continuing down to Queens Park.

Queens Park is run by the Corporation of London and consequently cycling in the park is prohibited. However, cycling was not our priority, lunch was. Some of the riders brought sandwiches and others bought lunch from the café but we all sat outside in the sun, enjoying our food and a capoeira display on the grass a short distance away.

Some of the riders left us here as Queens Park is probably the closest to home and the mums with their children had busy schedules. The rest of us decided we would explore Paddington Recreation Ground. Although ‘The Rec’ is in Westminster it is such a short distance away it was worthwhile for those who hadn’t been there before. 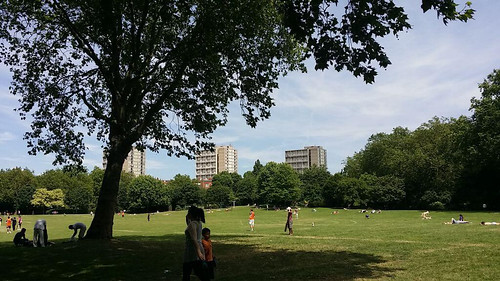 Paddington Rec also does not allow cycling within the park so we locked our bikes at the Carlton Vale entrance and walked around. On the Pavilion there are three Blue Plaques. The most recent honours Sir Bradley Wiggins, the Tour de France winner of 2012 who learned to ride a bike at the rec as a boy. The second honours Sir Roger Bannister who broke the four-minute-mile barrier in 1954 and trained on the running track here while a medical student at St Marys. The third remembers Richard Beachcroft and Lord Randolph Churchill who were involved in the buying and the building of the park.

Back on our bikes we continued along Carlton Vale, across Maida Vale and along quiet roads back to West Hampstead where we all said our farewells after having enjoyed a short but glorious ride around some really nice open spaces in north-west London. 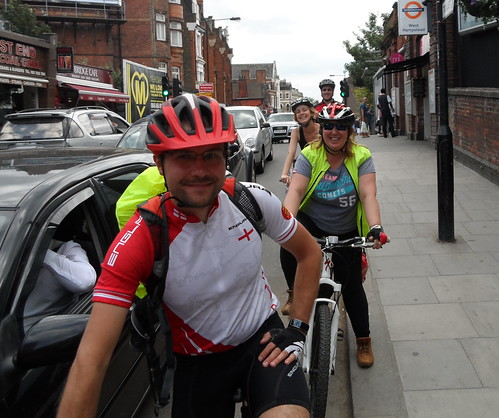 One of the things that I most enjoyed about the ride was the way we all supported each other. Even after the beginners had left us and the experienced cyclists would be expected to handle themselves, everyone was still looking out for the others. Thank you to everyone who came.

Eugene Regis has provide us with a map of the route on Strava with a graph showing all  the up hills and down hills.