Geoff Stilwell led a ride to visit Fulham Palace and Gardens. Former home of the Bishops of London from the 11th century until 1973.

As usual I was getting paranoid about the weather. All the forecasts had said the rain was moving away, but Saturday was still a bit wet. Sunday dawned with a bit more promise and fortunately lived up to it. 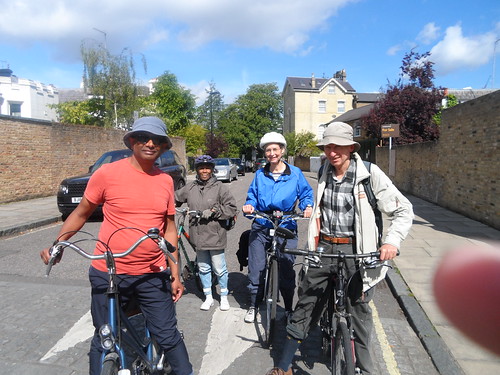 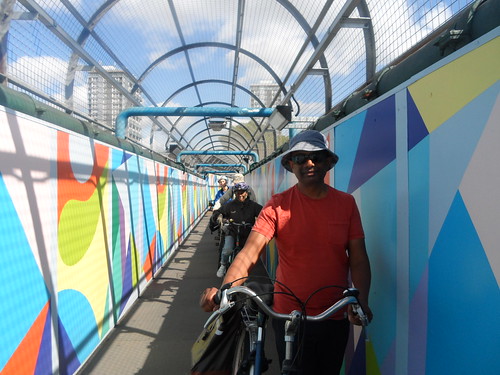 Three cyclists joined me at Sidings: Jiten, Michael and Esther. Ellen texted that she’d arrived on the train at West Hampstead and was waiting in Broadhurst Gardens. Ten minutes later we were cycling south through the back streets of West Hampstead. Crossing over Maida Vale we cycled down Sutherland Avenue to Harrow Road and across a footbridge into Westbourne Park.

Talbot Road led us across Notting Hill then around one of the many crescents around the Ladbroke Grove area, down to Holland Park and West Kensington. Coming around the back of Olympia we made our way down past Baron’s Court Station into Fulham. 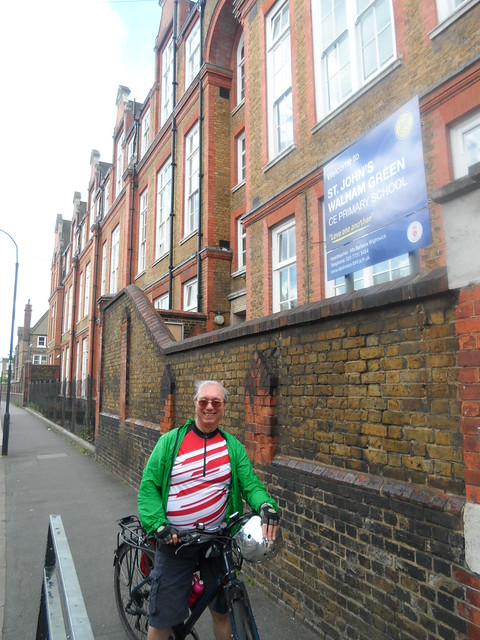 As I grew up in Fulham I was pointing out significant places from my childhood including my old Primary School where the group insisted on taking a photograph. The name of the school now is (as you can see from the photo) St John’s Walham Green. Previously it was called Munster Road School, after the road it’s on, which was a lot more fun (if you remember the television series ‘The Munsters’). From there it was a short push to Bishops Park just across the Fulham Palace Road.

Because I’d never been able to do the reconnaisance ride on a Sunday I was surprised to see that there was a Farmer’s Market in Bishops Park, next to the Palace grounds. I had envisaged having lunch at the cafe there but the market included mostly street food stalls from Columbia, the Middle East, France and many other places I don’t remember. This gave us a lot more choice so we were able to buy a tasty lunch or eat the packed lunch we’d brought with us. We sat down by the river and enjoyed watching rowers on the Thames passing below us. 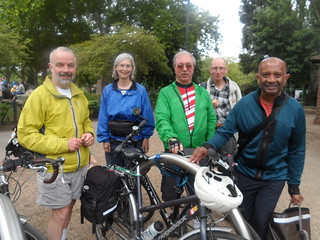 John had said he wanted to come on the ride but had a prior commitment. However, when free, he took his bike on the overground train to Imperial Wharf and cycled the rest of the way to meet us while we were eating. We were talking about the fact that the University Boat Race between Oxford and Cambridge that starts very close to where we were near Putney Bridge. John and Ellen had met while studying at Cambridge so their loyalties were with the light blues but the only times they’d seen the boat race from the bank the Cambridge boat had sunk. 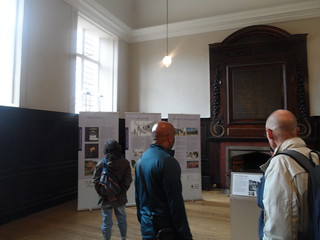 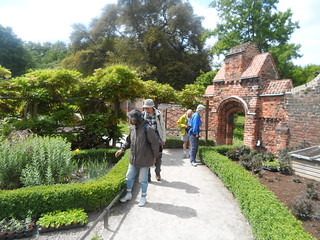 After lunch we walked into the grounds of Fulham Palace. We spent a little time visiting the house and more time in the gardens. There is so much to see and do there, for adults and children. There were tours and activities planned that we couldn’t stay for. Of course, we had to sit in the bishops throne, carved into a tree, with our minions around us. 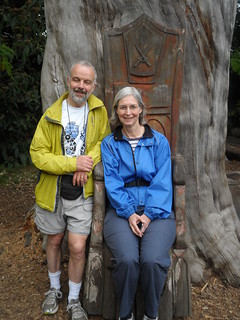 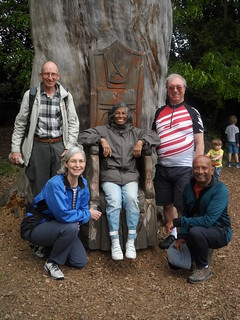 After a hot drink from the park café we set off again. We cycled towards Putney Bridge just to see how close we had been and then turned around and cycled in the opposite direction back towards Hammersmith. 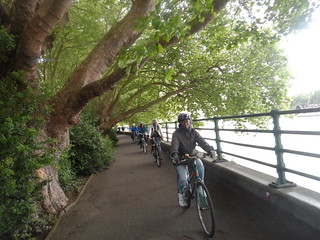 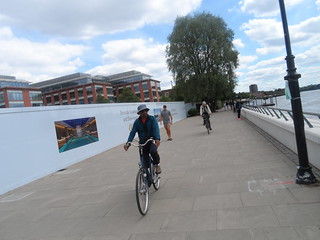 When I was a boy, the path beside the river between Putney and Hammersmith Bridges didn’t exist (apart from the section in Bishops Park). That stretch of the river was all wharves and industrial sites. Now the pathway is peaceful with lovely views and lots of new housing that few can afford. The shame is that the path is not continuous. Fulham Football Club at Craven Cottage is the first blockage where one has to ride out onto, relatively peaceful, roads and then back onto the Thames Pathway a little further along. The roads here are filtered to minimise rat-runs with exceptions for cyclists. There were three of these little diversions along the length. A little nearer to Hammersmith we were able to see the Wembley Arch so clearly. I always think it’s amazing how this distinctive landmark can be seen from so many parts of London, near and far. 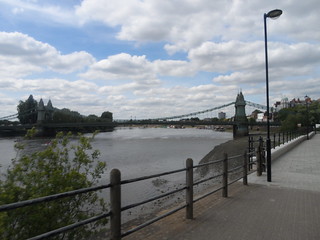 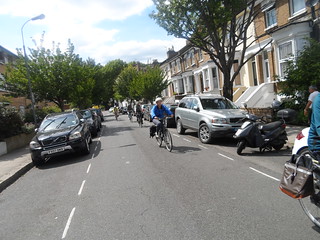 After cycling under Hammersmith Bridge we had to negotiate a very busy King Street for a few yards but soon back onto quieter streets towards Shepherds Bush. Here we picked up our route down. As we cycled around the aforementioned crescent, John asked us why this, and several other crescents in Notting Hill, were here. He then told us it was once a horse race track. I had noticed a small street called Hippodrome Place nearby which suggested he was right. Later I looked it up and found Kensington Hippodrome which closed in 1842. The crescents were developed following the line of the course.

From here, apart from minor differences in Holland Park, Maida Vale and West Hampstead we followed a similar route back.

Despite my fears it did turn out to be a beautiful day. It was great to meet up with friends and enjoy a day’s cycling and a visit to old haunts. It was a shame that more people couldn’t join us on such a lovely day.