This map records the LTNs in Camden. The ‘historical’ ones such as the Primrose Hill and Argyle Square areas which date from the ’60s and ’70s are shown as purple areas*. The recent ones (from 2019 on) are shown as blue areas and those under consultation as orange areas. The areas are given in hectares (1 sq km = 100 hectares). The landscape areas such as Hampstead Heath are part of the underlying map – only the largest ones are shown.

Each area has a pin associated with it. The pins provide access to the information collected, which includes the name, the ward it’s in, its area, the date the scheme was completed (for recent schemes), a description of the types of closures used and some photos.

Larger Map. The Google Sheet on which it is based is here.  And for people who can’t access Google Docs, a PDF is here.

The interactive chart below shows the total area of LTNs built each year. (It is based on the chart in the Google Sheet). Roll the cursor over the data points to see the areas in hectares. 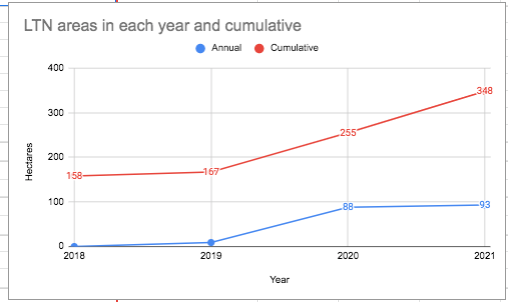 The figure for 2018 is the sum of the historical areas. Note that the area of the seven major parks (Hampstead Heath, Primrose Hill and Regent’s Park east of the Broadwalk, Waterlow Park, Highgate Cemetery, St Pancras Gardens and Corams Fields) is 318 hectares, while the area of Camden is 2176 hectares.

Targets for progress with LTNs 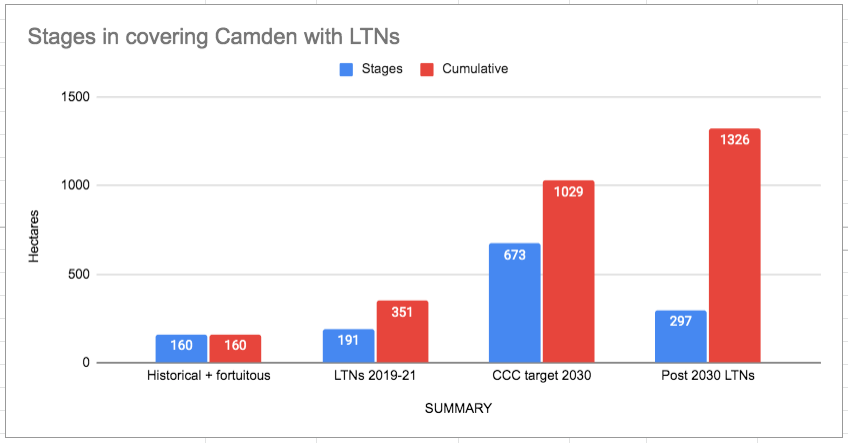 The map shows the historical LTNs and those built since 2019 as does the map above. Note that progress in 2020 and 2021 was at almost 100 hectares per year.
At that rate, we believe that it should be possible to build at least another  800 hectares by 2030. We have selected potential LTN cells across the borough, with an emphasis on making progress west of Finchley Road. These are shown in turquoise.
The latter should enable cycle routes (e.g. the former Q3) to be built on low-traffic roads.
Our map also shows all the remaining cells that need to be made into LTNs – ‘post-2030 LTNs’ (in dark green).
In carrying out this study we have found a few cells that already have no through routes, which we refer to as ‘fortuitous’ LTNs.
The total area that can be made into LTNs is about 1326 hectares.
The remainder of the area of Camden is taken by parks, the canal, railway stations, railway lines, the HS2 works and the space taken by the major roads.