Home / Campaigns / Outline of past campaigns / Cycle storage at home

Surveys have identified lack of secure storage as being as important as safety worries in a list of what puts people off cycling. CCC are working with Camden to identify locations where they can install secure cycle storage facilities. The first scheme will probably be on a council estate because of the availability of space and the proximity to users. We have been talking to other LCC groups, especially Hackney, who have had a residential cycle parking project called
HomeBikePark going for some time

Here are some photographs from their website courtesy of Trevor Parsons: 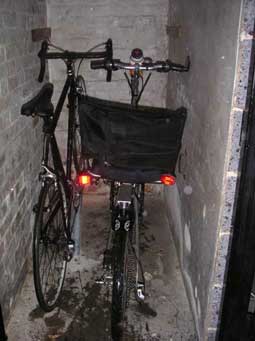 Converting a laundry room at the Old Gascoyne estate:

The most cost-effective scheme will most likely be one where an existing room is converted. This will allow two levels of security – a lock on the door, with keys probably rented to users, plus the facility to lock individual cycles to stands and racks within the room.

If you have suggestions for where a pilot scheme should be considered, contact John Chamberlain. The key elements are (a) a demand among residents and (b) an underused facility that can be converted.

Cycle storage is one measure that developers can use to get a good sustainability rating. This rating is mandatory for new homes in England and must be included in the HIP. The code awards one or two credits for cycle storage facilities e.g. one credit for one space per two studio or one-bedroom dwellings one space for two or three bedroom dwellings, two spaces for 4+ bedrooms, and two credits for doubling that. See
Code for Sustainable Homes