Farringdon: improvements for cycling and walking

More permeability for people who cycle and less for those who drive motor vehicles, making it more attractive to pedestrians and local residents too

The map summarises the main elements of Camden’s recent pedestrian and cycling improvements in the Farringdon area (you can see the consultation here). These changes, along with those made with the extension of TfL’s C6 route to Kings Cross should significantly improve the permeability and convenience for cycling throughout the area. Calming resulting from reductions in the permeability for motor vehicles are likely to make it more attractive to pedestrians and local residents too.

The route of C6 (originally CS6) through Farringdon is shown by the blue line running along Phoenix Place and Warner Street.

The two new important permeability improvements for cycles are shown in green:

The permeability reductions for motor vehicles are shown in red:

All that loss of permeability for motor vehicles must have eliminated most of the opportunities for rat running and should help to send them to the main roads, where they belong. 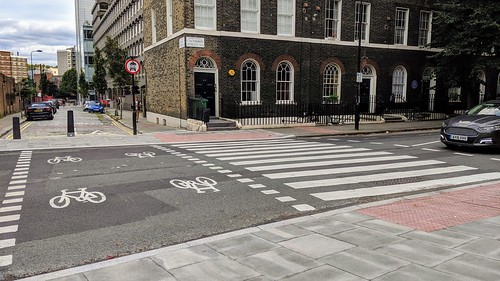 This crossing (shown in Photo 1) links the two closed sections of Gough Street across Calthorpe Street.

The continuous footway across the new road closure is a much more attractive solution than the footway build-outs shown in the original consultation.

Can Gough Street provide a useful parallel alternative to C6?

This fully filtered alignment is potentially useful for destinations at the western end of Rosebery Avenue and Clerkenwell Road, the latter having been made accessible in a southbound direction by the changes in Laystall Street.

Unfortunately, a small section of Laystall Street remains one-way southbound between Mount Pleasant and Rosebery Avenue and until two-way cycling is provided, this route will not work in a northbound direction.

Further, the option for most people to cycle through Gough Street is undermined by its rough, poorly-maintained cobbled surface. It would be really worthwhile to improve this surface either with tarmac or by relaying the cobbles. 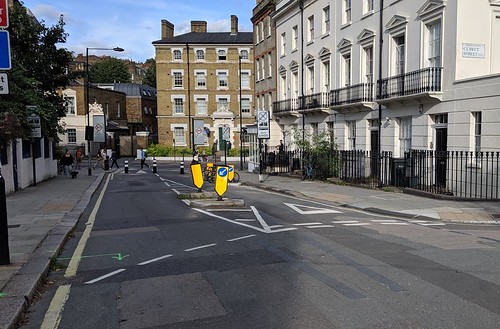 The consultation mentioned the creation of new open spaces, for example, associated with the road closures that are used to stop rat-running.

The green shading on the consultation map (although omitted from the map above) is, perhaps, a hint that these open spaces should be ‘greened’.

For example, the new space at the closure of Frederick Street (photo 2) would benefit from planting.

A particularly good example of greening in this neighbourhood is the cycle route through the housing estate on Ampton Street. 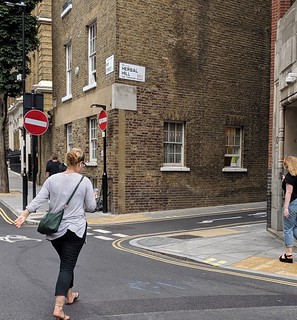 The ideal would be for there to be no direct route for motor vehicles between any two of the main roads on the boundary of the area (Grays Inn Road, Kings Cross Road-Farringdon Road and Clerkenwell Road/Rosebery Avenue).

The two ‘leaks’ that concern us are through Ray Street (1-way westbound from Farringdon Road) and through Herbal Hill (1-way northbound from Clerkenwell Road), both of which lead to the Warner Street – Phoenix Place – Calthorpe Street alignment (on the C6 cycle route), while Calthorpe Street provides direct access to Grays Inn Road.

Ray Street: We are concerned about the unnecessary motor traffic on the alignment of C6 and would like Camden to consider finding a means of alleviating it.

Herbal Hill: People on bikes are regularly complaining about being stuck behind motor vehicles when following the route of C6 on Herbal Hill. Before February 2011, a bollard blocked the way though – see our post about Islington Council’s consultation and our response.  We urge Camden Council to consider re-instating the bollard urgently. 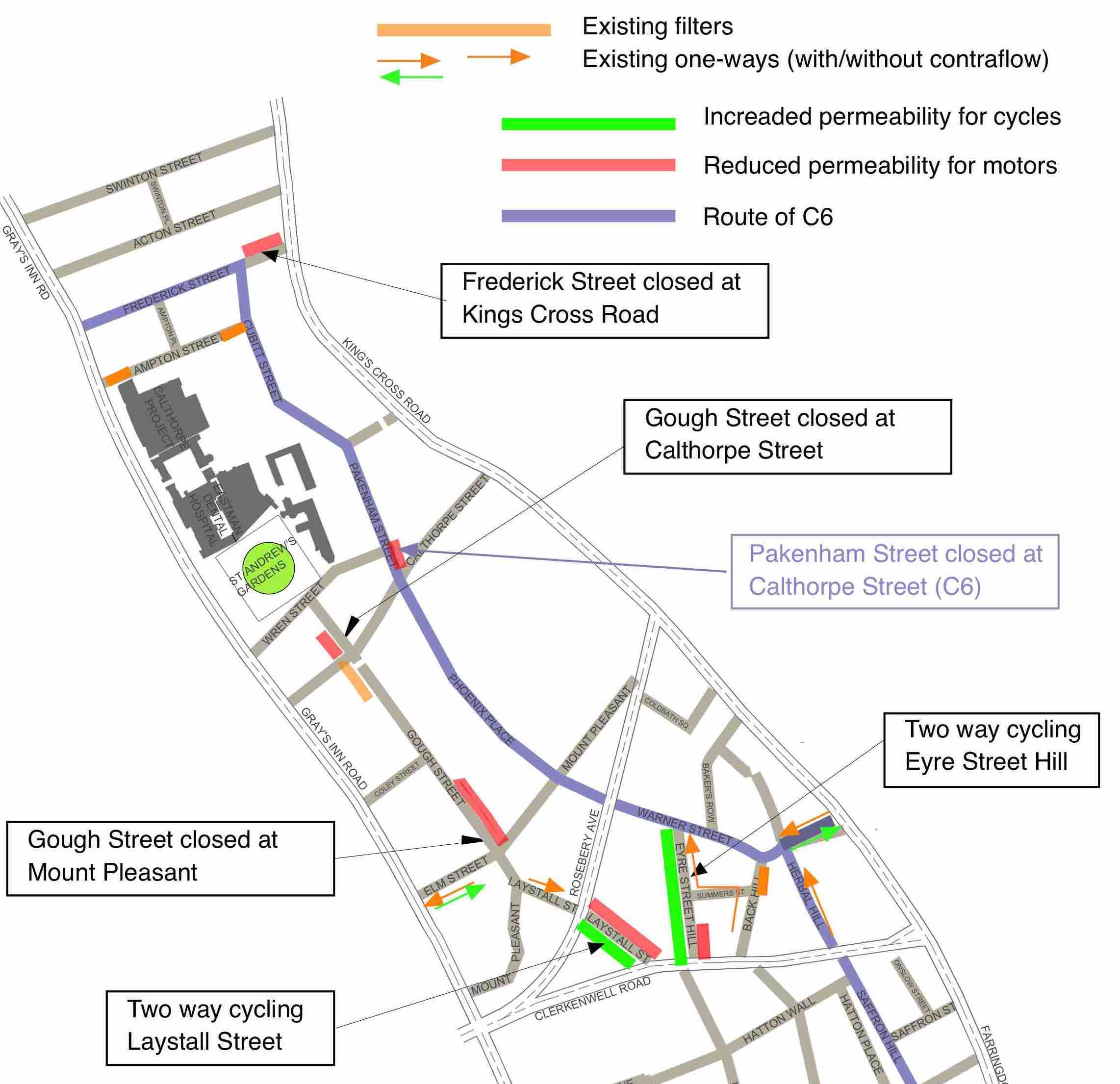 Map of the area showing the filters that exited before the new measures were implemented. Click to enlarge.

This set of measures has made a significant contribution to the Healthy Streets agenda in the Farringdon area by the introduction of six new road closures in addition to the four already in place.  The latter are shown in orange on the second map together with indications of one-way streets. We believe that this scheme has made a significant step towards meeting the following of Camden’s objectives:

In summer 2015 we sent suggestions to Camden Council, many of which were on the alignment of the SSL north of Calthorpe Street and were taken up in the development of C6. The remaining one – improving visibility at the junction of Frederick Street and Cubitt Street – has now been dealt with.

Our other requests were related to two different cycle routes starting from the Judd Street area, both of which converge on Hatton Garden†

The first has been enabled by the new scheme for two-way cycling in Eyre Street Hill.

The second is only addressed in the southbound direction by the introduction of two–way cycling in Laystall Street south of Rosebery Avenue, which has, as we suggested, effectively been converted to a full-time pedestrian and cycle street.

Here is a summary of our suggestions for making the area under consideration even better:

† At that time we were unaware of the details of plans for the northern extension of C6 and saw Hatton Garden as the route to Southwark or the City but avoiding Farringdon Road. However, although there is fortunately no longer need to cycle across Holborn Circus, Hatton Garden is a useful destination in its own right.