Five point closures and a pair of pop-up cycle lanes

During the last two weeks of May we were very pleased to see the appearance of: 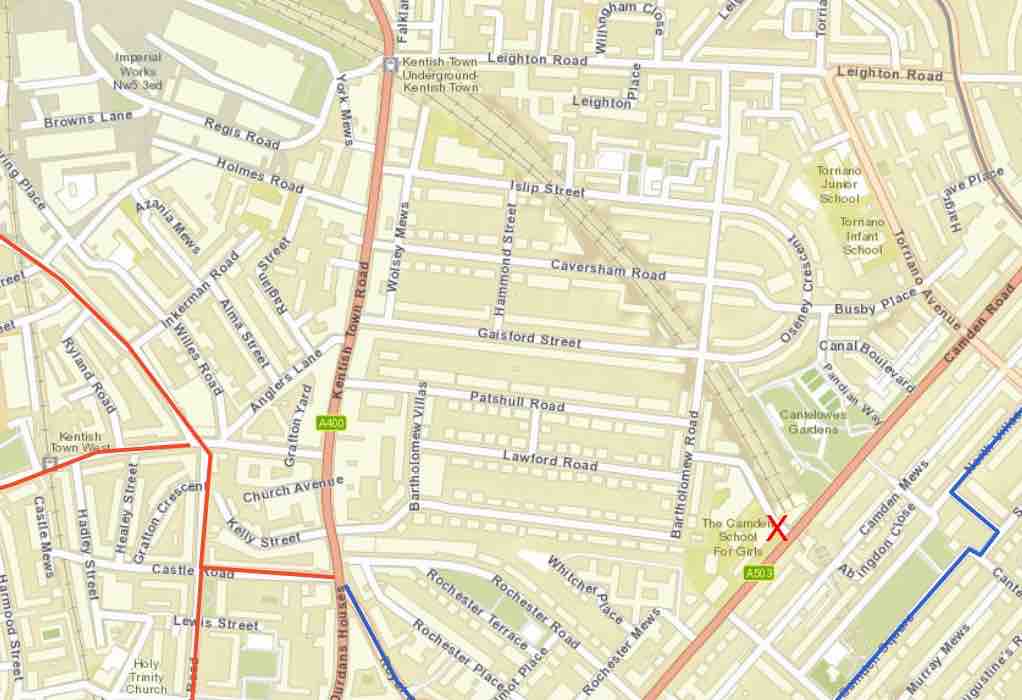 The Sandall Road filter is indicated by a red cross. The blue and red lines are nearby cycle routes – C6 and the Camden Square route (blue) and links to the Grafton Road route and the partially completed Prince of Wales Road route (red).

Sandall Road is a short road that formed part of a notorious rat-run between Camden Road and Kentish Town Road as shown in Visualisations of Camden’s  O-D (Origins and destinations of traffic) survey of the area– carried out in December 2019.  Seventy-five percent of the almost 2000 motor vehicles per weekday on Sandall Road was ‘through traffic’ that left the area without stopping.  The entrance to Camden School for Girls is on Sandall Road. 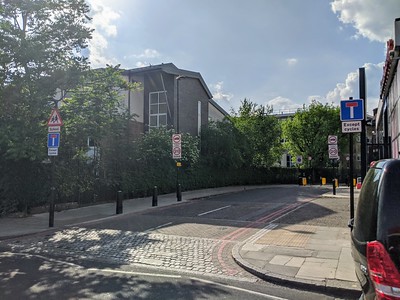 Sandall Road after the closure viewed from Camden Road 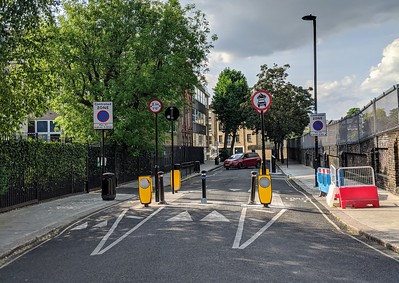 Before this new scheme, the road had been narrowed to reduce its use by large motor vehicles while cycles used the lanes on each side. The new scheme simply adds a single removable bollard in the center of the narrowed section.
As well as providing a Healthy School Street, this change also provides a safe walking route to the nearby Cantelowes Gardens and should result in a significant reduction of traffic passing through the whole area. 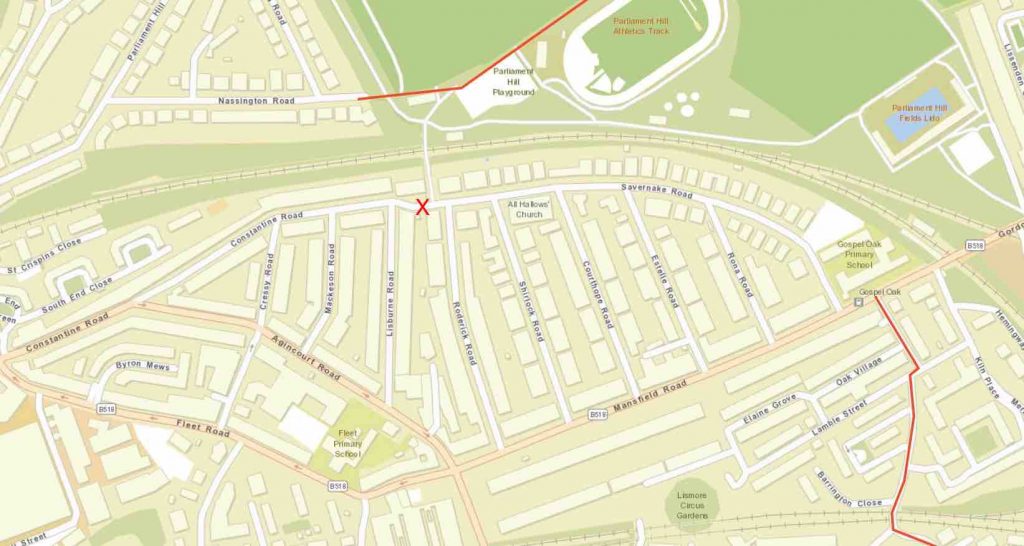 Map showing the context: the red cross shows the location of the filter; the red lines are cycle routes on Grafton Road and across the Heath

Constantine Road and Savernake Road together form what should be a quiet road running close to the Overground rail line which forms the boundary of Hampstead Heath. However, drivers regularly use it as a short cut to avoid the signals at the junction of Agincourt and Mansfield Roads.  A Healthy School Street Scheme on Savernake Road, outside Gospel Oak Primary School, was recently made permanent after having been operating as a trial since January 2019. 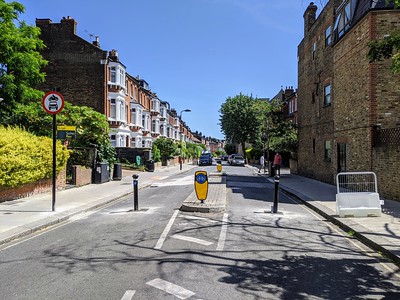 View from Savernake Road west of the new filter 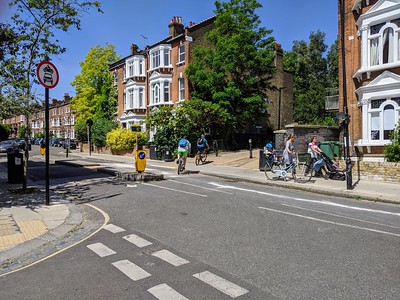 A bollard closure has been placed on Savernake Road between Lisburn Road and Roderick Road so as to prevent anyone driving a motor vehicle from taking a short cut between Agincourt and Mansfield Roads. It is located near to Savernake Bridge – the footbridge connecting this residential area to Hampstead Heath. The bridge provides cyclists and pedestrians with a route to the Heath – see our photo taken on 28th May around midday when scores of people were using it while out exercising.
The presence of this new filter not only enhances the Gospel Oak Primary School Street but also provides a safe walking and cycling link connecting Grafton Road to Hampstead Heath as well as creating a low traffic neighbourhood in the area north of Agincourt Road and Savernake Road shown in the map above. 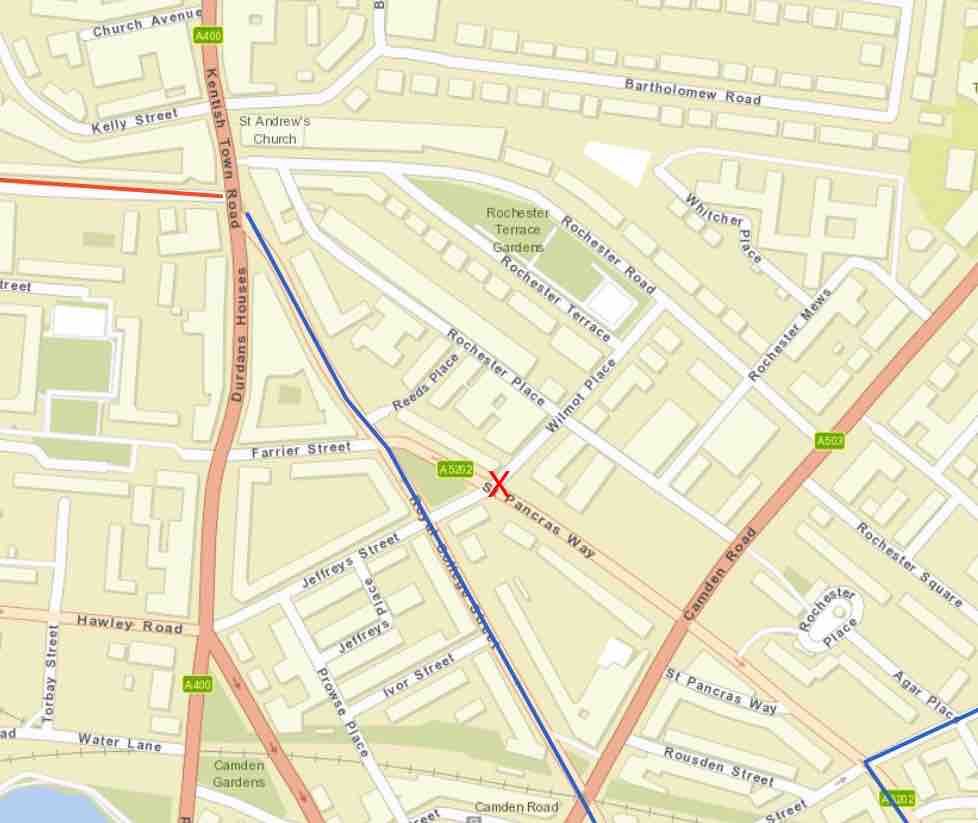 The red cross shows the location of the road closure; the blue and red lines show cycle routes (C6 and the link to the Grafton Road route)

Wilmot Place formed part of a rat-run between Kentish Town Road and Camden Road. This closure of Wilmot Place at St Pancras Way breaks that rat run and also creates a low traffic neighbourhood by preventing any driver of a motor vehicle taking a short cut through the area bounded by Kentish Town Road – St Pancras Way and Camden Road. The northern boundary is the gap between this area and Bartholomew Road. 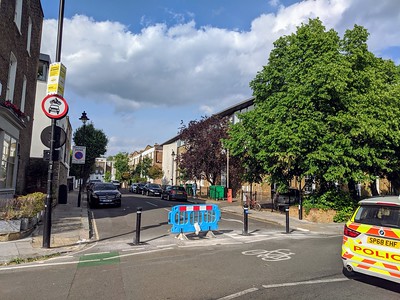 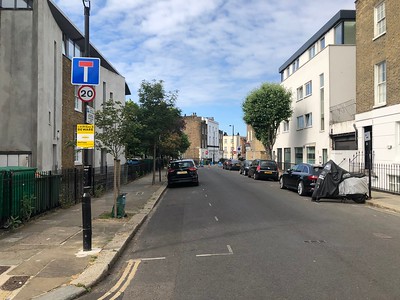 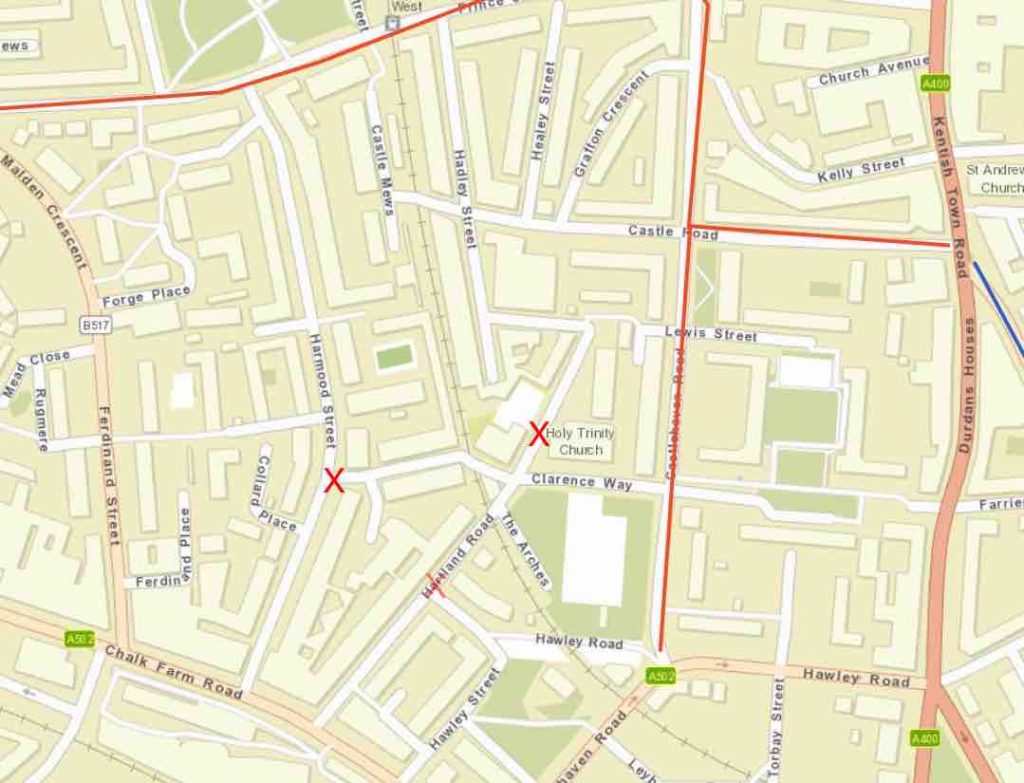 The red crosses indicate the locations of the two bollarded road closures – while the pink one shows the bollardless closure. The red line indicates the Grafton Road cycle route 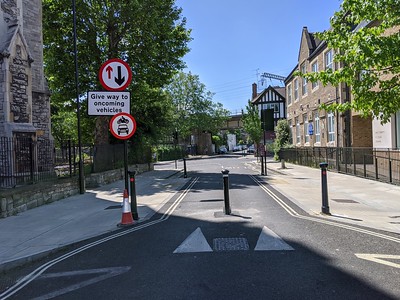 This scheme is designed to create a low traffic neighbourhood by eliminating rat-runs through the area bounded by Prince of Wales Road, Chalk Farm Road, Harmood Street and Castlehaven Road.

Holy Trinity & St. Silas School is on the west side of Hartland Road opposite Holy Trinity Church.

We understand that when the school is in use, pupils need to cross Hartland Road between the church and the school

It comprises two closures by bollards:

A third ‘closure’ is intended on Hartland Road by the junction of Hawley Road. It relies on a pair of rather inconspicuous Flying Motorcycle signs and that’s all. These signs are intended to tell drivers travelling in either direction that they must not continue their journey on Hartland Road. When we were there on Bank Holiday Monday around midday, drivers were totally ignoring those signs. We have also noted  the following post from a local resident on Camden’s Safe Travel Commonplace site: 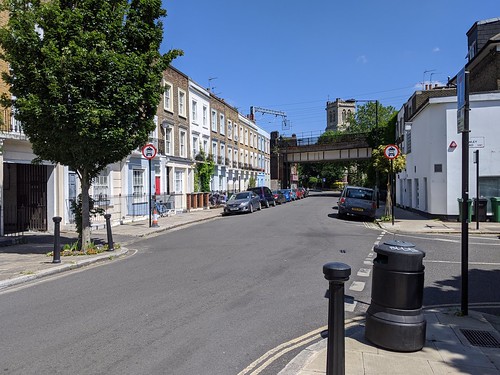 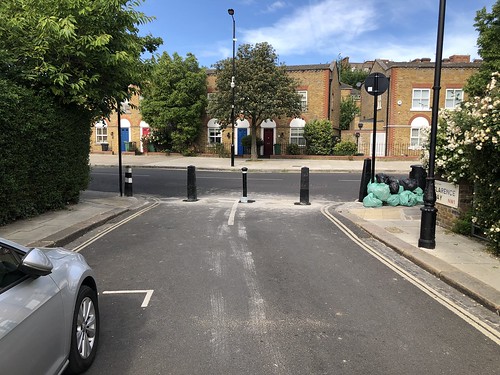 This needs much better signage plus physical measures and we are pleased to see that these have been included in Phase 2. 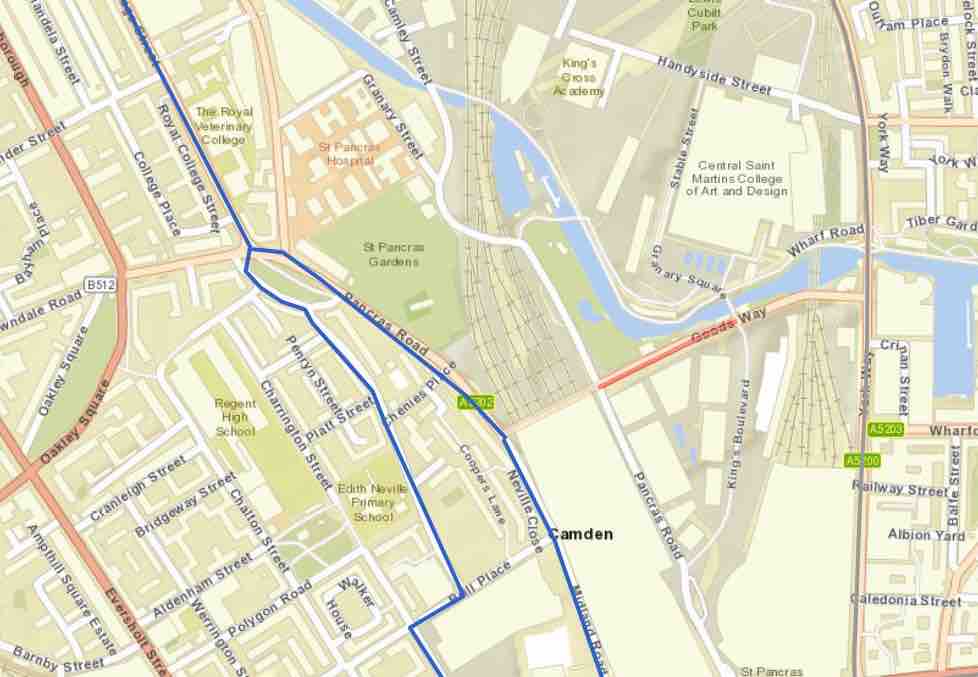 The red line shows the location of the pop-up cycle lanes; the blue line on Pancras road is C6 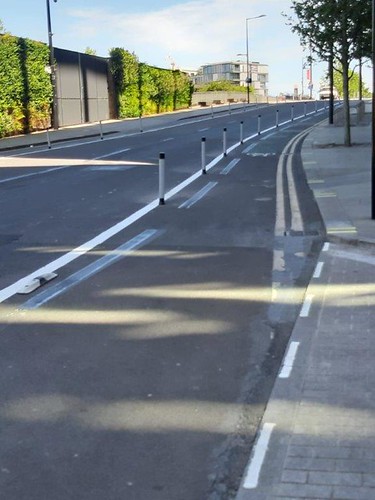 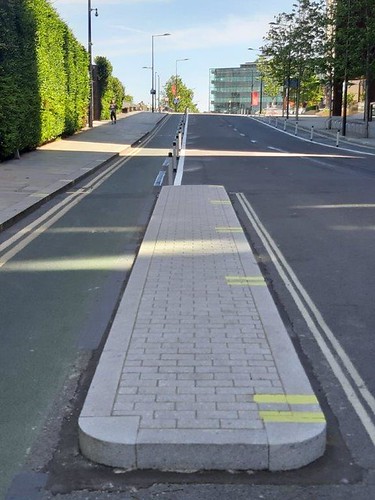 These cycle tracks are marked as mandatory – with solid white lines.  They replace and slightly widen the existing cycle lanes. See StreetView. The lanes are protected by means of orcas and wands.

Goodsway is a ‘Primary Proposed’ link in Camden’s planned borough-wide cycle network.  It is good to see its being brought forward and implemented as a Covid-19 measure, to improve safety to cater for the already-visible increase in the number of people cycling as a result of the Covid-19 pandemic.

Links to Camden’s information about the schemes described above

The page Making travel safer in Camden has links to the schemes described above.