The council is proposing the permanent closure of Coptic St between Little Russell Street & Streatham St.

Similarly to Museum St last year, this would be in place starting on Car Free Day (Wed 22 Sep 2004).

Little Russell St (between Museum St & Coptic St) would change from 2 way to one way westbound.

The entrance to Coptic St (at the Gt Russell St jucntion) would be narrowed to deter larger vehicles from using Coptic St. 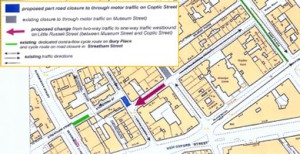 In conjunction with this years International Car Free Day 2004, Camden Council is proposing to close a small part of Coptic Street WC1 (between Little Russell Street and Streatham Street) on 22nd September 2004 to through motor traffic on a permanent basis -see map below.

This closure would be almost identical to last year’s closure of part of Museum Street to through motor traffic which was launched on International Car Free Day 2003.

The benefits of closing part of Coptic Street to through motor traffic is likely to be very similar to closing part of Museum Street last year. This has helped to bring the following improvements:

Please note that the introduction of this scheme may fesult in the relocation of some residents’ car parking bays to nearby streets where space permits.

It is also proposed to construct an entrance measure at the northern end of Coptic Street (at its junction with Great Russell Street) to deter large vehicles from using Coptic StreeL
Access will be maintained across the road closures in Coptic Stfeet for fire and other emergency services via removable bollards.

We would now like to find out if you and I or your organisation would:

It is proposed that the closure will commence on 22nd September 2004, on International Car Free Day. The Council would also like to hold a small street festival on this day to launch this measure. This will include a number of fun activities as well as some exhibitions on green transport. The one-day festival will require a wider closure of the Coptic Street area, from New Oxford Street to Great Russell Street, for one-day only, after which the permanent motor traffic measure would be implemented. We would also like to hear your views on the one-day festival.

We support the closure, but strongly object to the 1 way street which is neither desirable nor necessary. CCC is opposed to one way streets in principle on a number of grounds which the council is well aware of (see here). In this instance if the road remained 2 way very few motor vehciles would use it eastbound due to the closure and existing one way in Coptic Street. However the new one way would unnecessarily force cyclists travelling through the closure onto the busy New Oxford St/Bloomsbury Way road system. Finally, not installing this one way street will reduce street clutter as several one was signs and no entries will be avoided.

We will only support the Car Free Day event if the one way proposal is dropped.