The headlines of the proposed changes, which form part of the Bloomsbury Clear Zone initiative are: 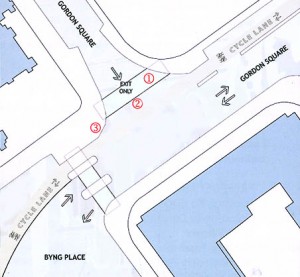 Motor traffic prevented from turning into Malet Street from the north, and cannot turn right when exiting into Torrington Place.

Q1. The Camden Cycling Campaign agrees that there is a safety problem at this junction

Q2. We are pleased to support this proposed simplification of the junction.

Further suggestions: We would like to propose that a new zebra crossing is constructed across Malet Street at this junction to reflect the high pedestrian flows and need for improved pedestrian priority.

The Camden Cycling Campaign welcomes the proposals for Gordon St/Gordon Sq which are clearly aimed at improving safety for cyclists at the Seven Stations Link (SSL) junctions.

Q3. We would like to see less Euston bound MOTOR traffic on this road.

Q4. However we are extremely concerned about the planned introduction of new one way streets on the following grounds:

We therefore propose the following solutions in order of preference.

Since the original proposal was also to make Gordon Street one way southbound between Endsleigh Gardens and Gordon Square, if this is retained instead of our proposed road closure in option 3, we would suggest a similar cycle plug at the south end of Gordon St.

For option 3 we strongly recommend that the carriageway width in Gordon St at its junction with the SSL be reduced to around 3 metres, with the wide swept junction curves made much tighter (to deter motorists from shooting across the cycle track at speed). We would also like to see the segregating islands extended closer to the junction to give cyclists more protection from motor traffic.

Finally, we are concerned over the potential for motor traffic displacement to, and greater pressure on, the Gordon St/Endsleigh Gdns junction. We recommend that this junction be reviewed after scheme implementation to assess whether new measures are required to protect vulnerable road users.

Note: A no entry plug with a cycle contraflow lane is where a road is two way to motor traffic throughout its length except for a short length of one-way working at one end. This means that entry into the road is banned at one end for motor traffic, but there is a short section of contraflow cycle lane past to allow cyclists to travel past the no-entry signs.