Camden Cyclists organised and ran a ‘Slow Bike Race’ when Camden High Street was closed on Sunday 21st November 2010. Other events focused on sustainable travel and included music and a Dr Bike.

We are grateful to Cloud 9 Cycles for providing the first prize (a Kryptonite Keeper 880 chain with padlock) and to Camden Council for provided the second prize – a track pump as well as two T-shirts designed by Anthony Lau (the designer of cycle parking in the car space and of cycle hoops. A slow bike race is one in which the person who takes the longest time to cover the course is the winner. We timed one rider at a time and noted how long they took to ride a narrow 25 metre track. So as to make it fair, we decided everyone should use the same bike – and following Paul Braithwaite’s suggestion we used a Boris Bike (aka Barclay’s hire bike). This was a good idea because it enabled people to try out the bike and to learn about the hire scheme.

After setting up the course, we tried out the course and managed times ranging from 17 to 35 seconds. The first few real competitors managed to raise the record to 40 seconds. But then Conor from Rollapaluza came in with some new techniques and reached 2 mins 14 secs. Conor’s record was broken by Mark Curling at 2 mins 45 seconds. However, Conor came back and reached 4 mins 23 seconds on his second try. Later in the day Mark’s time was equalled by Ben.

Conor told us that he learned his technique by doing Track stands as a part of Track Racing.

The first and second prizes were awarded to Conor and Mark. Ben accepted a T-shirt. Two young teenagers managed to make just over 1 minute and were awarded a T-shirt and some colourful ankle warmers. 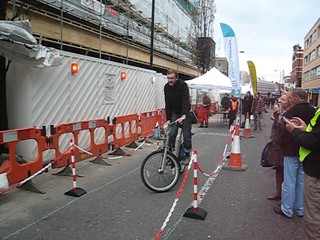 This event was good fun to organise and participants and spectators seemed to enjoy it. Another time we’d like to be nearer to the main action so that more people would join in. Thanks are due to George, Henrietta, Alex and Colleen for helping run the event. Also thanks to Camden Council for providing the gazebo, table and the rather smart chains and bollards.

To see a slide show with a few more images, go to Camden Cyclists on Flickr