Notes on Camden Cyclists posters and info for this event. Also a link to the speakers presentations.

The Air Quality Summit was held at Camden Town Hall on 21st November 2011.

LB Camden has uploaded all of the presentations to their website (including Prof Frank Kelly, Isabel Dedring and Simon Berkett). Follow.

For our stall we made two posters to illustrate the possible effects of air pollution on cyclists. 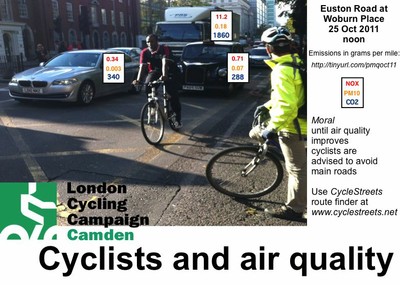 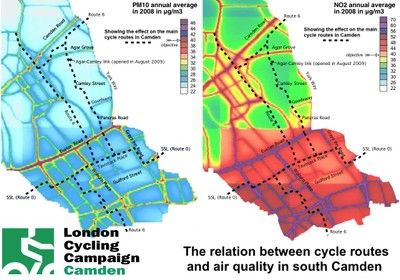 The following notes add to the ideas illustrated by the posters:

Air pollutants can be harmful to human health and the environment:

– we’re concerned here with those that arise from motor vehicle traffic;

– high levels or exposure for a long time may be harmful to our health.

– The talk this evening by Prof. Frank Kelly will address health impacts.

– these include the particulate (PM 10) and nitrogen dioxide (NO2).

– Cycling is still very good for you

BMA: “Cycling regularly will improve your fitness and can help you live a long and healthy life”;

– it improves lung function, reduces the chance of heart attacks and combats obesity.

– exposure to pollutants will not cancel out the positive effects of cycling.

– cyclists can plan routes to avoid busy roads or travelling at a less busy time;

– other reasons to avoid them include safety, noise and pleasantness of the experience;

– this questions the use of the Cycling Super Higways.

We will demonstrate how to use the CycleStreets journey planner to find quieter routes:

Are cyclists affected more than other travellers in London?

A study on London cyclists by Chinedu Nwokoro et al. from Barts and the London School of Medicine and Dentistry.

they found a higher level of carbon in the airways of the cyclists.

CN by email: It’s a combination of higher exposure and longer duration, not sure what is the key factor, the exercise may also play a part but we can’t specifically say that based on our results.  Our focus is on promoting cycling but doing it in as healthy a fashion as possible.

The photo is overlayed with figures for emissions by motor vehicles. These figures for 2009 are taken from Norman Baker’s reply to a parliamentary question from Karen Buck on 3rd October 2011. tinyurl.com/pmqoct11. NOx refers to NO2 and NO combined.

The maps come from the Review of Air Quality for the Health Scrutiny Committee written by Cllr. Paul Braithwaite. See the House of Commons website at: tinyurl.com/PB-AQ-cut

The maps show that the cycle routes do avoid streets heavy in PM10 but that there is considerable exposure to NO2 south of Euston Road.