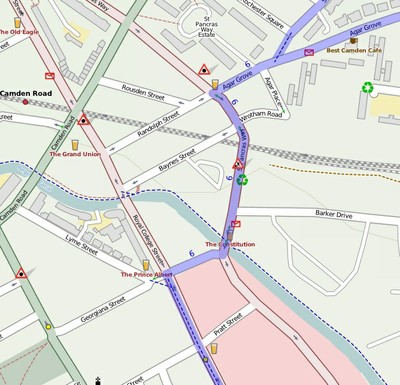 The segregated track north of Barker Drive will remain open throughout the works.

Access to Barker Drive will be available eastbound, in from Georgiana Street/St Pancras Way and out via Camley Street .

The cycle track south of Barker Drive will be used as a motor vehicle access to Baker Drive – its kerb was removed the week before last. There will be a ‘cyclists dismount’ sign for this section.

This note discusses how cyclists on Route 6 can travel between Royal College Street and Agar Grove during the works.

The work will be done three sections:

Northbound via Baynes Street (which will be two-way in this stage) and then onto the segregated track. You may need to walk for a few yards.

Southbound: use Agar Place and Wrotham Road, then walk on footway from Wrotham Road to Barker Drive then ride in cycle track in St Pancras Way to Georgiana Street.

Southbound:  ride in St Pancras Way to Barker Drive then walk on the footway to Georgiana Street.

The re-building of the cycle track is scheduled to commence on 6 December and are expected to be completed by 10 December 2011.