Problems for cyclists at south east corner of Russell Square since the east side became two way (July 2011).

In July 2011, the east side of Russell Square became two way and soon after, Camden Cyclists and councillors Paul Braithwaite and Julian Fulbrook received several messages from cyclists about problems at the SE corner of Russell Square when trying to turn right into the southern arm of the square. e.g. see this email.

Previously there was a feeder lane taking you round Russell Square now the two way working and the junction means cyclists have to turn right across traffic travelling north from Southampton Row.  I have witnessed several cyclists jumping the red light in order to beat the traffic, cycle across the very wide pavement next to the Square or make other dangerous manoeuvres in order to get through the junction and avoid having to make the right turn as you would normally do.  I was discussing this with someone who was not happy to have jumped the light but she felt this was safer than waiting for the lights to change.

Does anyone from Camden or other Central London Boroughs know about these changes and whether any cycle facilities are planned to accommodate cyclists? The  Guildford Street junction now has a central cycle lane feeding into the ASL but after that there is nothing.  The layout seems to me unsafe and unfriendly to cyclists and not very good for motor vehicles turning right either.  Robert Waltham Forest John Chamberlain and  I spent half an hour at the SE corner of Russell Square on 27th July in the rush hour (just after 9 am). When I arrived, I came through with 12 cyclists from Guildford Street. The right turn into the square is indeed very hazardous; if you wait until the northbound traffic stops, you are sandwiched between vehicles, then when you turn right you are pursued by right turning vehicles. Most cyclists turn before the green signal, many of them using the footway in the centre of the square. In addition, we think that when the south side of the square becomes two way, the situation will be even worse than it is now. See the blue arrow in the diagram below. The island in the diagram has not been implemented and the south side of the square is still one way eastbound. 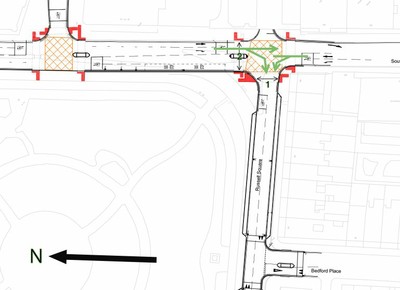 I took a series of photos (standing on the square on the SE corner) and have made them into a slide show (please click the first photo, so that the captions will are revealed).

At 9 am on 4th August a meeting was held: attended by Camden officers John Futcher, Dave Stewart and Marion Dwarmena and Cllr Paul Braithwaite, John Chamberlain and I. Although it was raining hard, large numbers of cyclists were emerging from Guildford Street, then bypassing the queue of vehicles on the outside. This time the situation seemed even worse than that shown in our slideshow as the vehicles were not observing the ASL, so there was no place for cyclists to wait at the front.

The officers offered the following solutions:

Email from Marion Dwarmena,  5th September 2011: With regards to the traffic signals, we have been informed by TfL that any changes will have to be undertaken after the 2012 Olympics.

Email from Marion Dwarmena,  23rd September 2011: At present the contractor is working in three areas of the site, and it would not be advisable to open up a fourth area now. In one of the excavated areas we have encountered a problem which is delaying the works, and is also causing delay to the operators of the taxi shelter. As soon as we resolve that problem, the contractor will have to focus on the last major area of work. In view of this, the islands will be constructed towards the end of the project, which will be between the end of November and mid December. Email from Dave Stewart, October 18th. I met with the contractor yesterday (17th Oct) who has now reviewed their programme and, subject to the availability of materials, will aim to have the islands constructed by this weekend.   The island at the SE corner was completed by the end of November. In addition, a pair of white lines have been painted on the road leading up to the island, providing what seems to be an unofficial cycle lane down the outside of the motor vehicles.    The island does provide some protection and provided the ASL is clear, cyclists can reach the front of the line of vehicles. They still need to go forward and wait for the line of oncoming traffic to pass, so this turn isn’t ideal – signal support is required.

Now that the remaining three sides of Russell Square are two way, we expect that cyclists travelling east-west and west-east will use the north side of the square between Montague Place and Bernard Street and between  Guildford Street and Montague Place respectively. This may relieve the pressure to turn right at the south west corner.

At CCC’s quarterly meeting with Camden officers, Simi Shah said she was planning a safety audit and would investigate the problem further.

At CCC’s quarterly meeting with Camden officers, Simi Shah  stated that a safety audit had been done mid-morning at the wrong time of day and showed no problems. Paul Briathwaite stated that a study should be at 8.30-9.30 am and Simi Shah suggested sending auditors an early morning video clip.

At CCC’s quarterly meeting with Camden officers, Dave Stewart reported: TfL has already been told about an early stop NB, but a better solution has been devised, the signal out of Guilford Street could be ‘in a wave’ with the signal at the SE corner (instead of with the signal on Russell Square N of Guilford Street).That is, effectively there will be an ‘early release’ for the move from Guilford Street and the right turn at the SE corner (with the effect of a ‘late release’ on NB traffic on Southampton Row). DS will inform CCC when this is achieved.

At CCC’s quarterly meeting with Camden officers, Dave Stewart reported: this is ongoing; there has been no progress. He recommends that the signal out of Guilford Street should be ‘in a wave’ with the signal at the SE corner. That is, there will be an ‘early release’ for the move from Guilford Street and the right turn at the SE corner. Whether or not this is done, there will be a right turn phase at the corner. DS will invite CCC to a site meeting.

At CCC’s quarterly meeting with Camden officers,Simi Shah reported that Dave Stewart had met TfL on site at 8am and TfL accept problem exists. TfL don’t accept DS proposal for a ‘green wave’ from Guilford Street. DS then sent us a copy of the following rather annoying letter from TfL officer (who perceives the problem as ‘cyclists behaviour’ rather than poor design:

We found that cyclists would continue to cycle in the middle of the road on Russell Square as the exited Guildford Street. Cyclists would then continue to turn right into Russell Square before they reached the stopline, effectively cutting across the junction. This is the same behaviour we currently see and is the behaviour we are looking to change.

When changing the phasing to progress Guildford Street we also found that progression for the main north south movement was very poor. North and southbound queuing increased effecting bus routes and general traffic. This also lead to temporary exit blocking of neighbouring sites.

Following these observations we can now rule out changing of the co-ordination of the lights in this location to resolve the cyclist behaviour issue.

At CCC’s quarterly meeting with Camden officers, R  (Camden) reported that TfL had tried and rejected a ‘green wave’ for cyclists emerging from Guilford Street. He is going to ask TfL to test stopping the northbound traffic early and/or a right filter arrow. He is also designing an offside cycle lane and will share the design with CCC.

Raymond Cheng to ask TfL to test stopping the northbound traffic early and/or a right filter arrow. He is also designing an offside cycle lane and will share it with CCC.

RC reported that TfL has provided a TRANSYT model of the junction and that he has to run the model to evaluate the effects of:
i) an early cut off for northbound traffic
ii) the removal of one northbound vehicle lane
In either case, the means of approach for southbound cyclists needs to be designed.

From officer KdL 12/6/14: We have recently submitted our modelling analysis for the South-East corner of Russell Square which would include an early cut-off phase, allowing cyclists to turn-right safely. This is currently with Transport for London for their review. Does this also include ii) the removal of one northbound vehicle lane. In either case, the means of approach for southbound cyclists needs to be designed? Camden are convinced of solution, will meet with TfL next Wednesday. Action: officer SS will give CC an update immediately after the meeting.

Aim is for implementation of SE corner by 31 March 2015. Action: SS or RC to report progress.

Aim is for implementation of SE corner by 31 March 2015. (i.e. of an early cut off for northbound traffic).

RC is drawing up another layout for this scheme. Then it will be modelled etc.

Target for implementation by end September.

The means of approach for southbound cyclists still needs to be designed.

The early cut off is still not in place and SB cyclists are still turning early into Russell Square south side.