What Really Annoys Drivers About Cyclists

Talk by Prof Andy Tolmie, Institute of Education at our AGM 16 May 2014.

Andy’s talk was based on work he had been involved in. It was commissioned by DfT from TRL on Drivers’ perceptions of cyclists about 10 years ago, when the government aimed to increase sustainable transport   Read the original report.  Here are some notes taken during the talk: 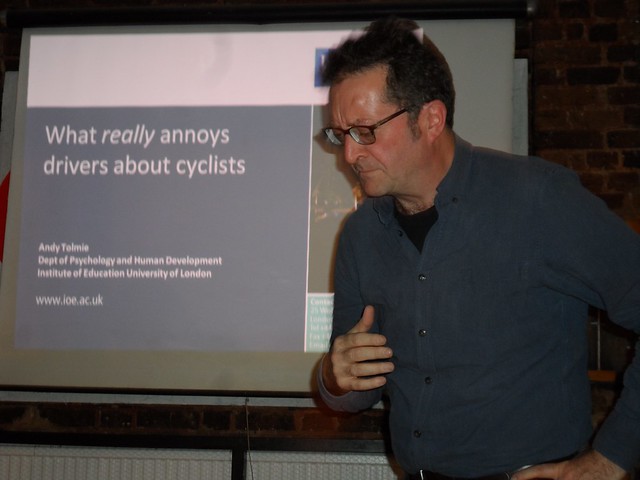 This work was carried out in three stages:

The aim was to try to understand drivers perceptions of other road users, including domestic, professional drivers including HGV drivers. The studies were carried out in Camden, Hull, Leamington Spa, and Bristol

The investigators looked at interactions between drivers and cyclists in a variety of situations, e.g. at ped refuge, a roundabout and a left turning motor.

Motorists don’t bring up the topic of cyclists.  But if cyclists are mentioned, they had a low opinion of them, mentioning: “not proper road users”, “don’t pay tax”, “don’t obey highway
code”. But they said some other road users are even worse.

In groups, these opinions were expressed more strongly.

The main point was the perceived unpredictability of cyclists.

In some scenarios cyclists’ behaviour was criticised e.g. “messing about on roundabout”.

Even when a driver turns left they blamed the  cyclist for not noticing. 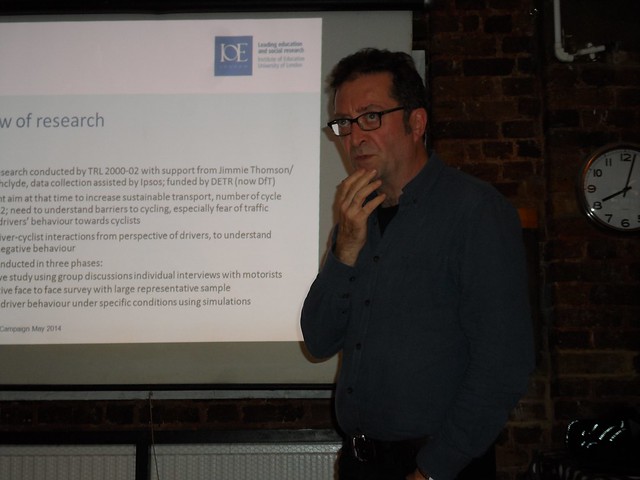 There were much higher levels cycling in Bristol and York, where there was little evidence of strong feeling against cyclists, particularly with HGV drivers.

Reasons for complaints weaving, signals, lights, getting in the way

Roadworks – most drivers said they would be careful

But also said they would be affected by other road users.

66% thought most cyclists don’t obey highway code most of the time.

The majority thought cyclists should be given more priority.

Majority think education is more needed by cyclists than drvers.

Drivers affected by situation. And exhibited out-group versus in-group differentiation

The following combinations were tested:

– Cyclist on left, at centre and wobbling

It was observed that a road narrowing reduced drivers confidence but that a cycle lane helped irrespective of whether the cyclist was in it.

Drivers blamed cyclists for their discomfort. They said that: “Being in the centre of the lane is less courteous”

Cyclist’s are seen as obstructive, but with a cycle lane drivers are more confident even if cyclist not in lane. Narrowing caused unpredictable driver behaviour.

But drivers  they want to encourage cyclists. 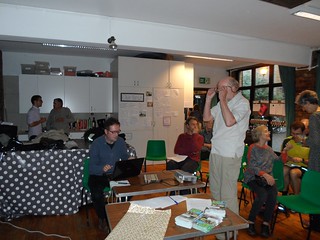 No evidence of aggression.

A lively interest in the topic was shown in the following discussion.