Report on a talk by Mark Treasure at CCC meeting 18th January 2015 showing the benefits from unbundling and the influence of Buchanan’s Traffic in Towns.

We  all know Mark from his blog ‘As Easy as Riding a Bike‘ and we appreciated his coming to talk at our meeting.

In explaining the title of his talk, Mark said an alternative is ‘Intrinsic Safety’. The main points are:

Netherlands adopted Sustainable Safety for economic reasons. How successful was it? They have a similar casualty rate but more exposure from children and over 60s who all ride bikes. They have hugely expanded their cycle network

Tasks should be smaller than people’s capabilities. 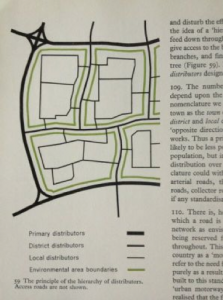 Primary Distributers (thick black lines) should not give access to buildings

Unfortunately the UK failed to implement these ideas. Instead, High Streets have become major truck roads. (vehicular urban streets with fumes and noise). From the many quotes from ‘Traffic in Towns ‘ that Mark followed up with, it is sad to think the opportunity we missed in the UK.

e.g. Assen cells are about one mile across.