The All Round Camden Bike Ride took place for the 10th time on 19th June 2016, led by John Chamberlain.

It is our tradition to ‘ride all round Camden’ on the last Sunday of Bike Week. ‘Riding all round’ means that we follow a clockwise route round the perimeter which visits most of the wards and then complete the ride by visiting the wards ‘in the middle’. Originally we rode right on the boundary but this included some rather unpleasant roads such as Kilburn High Road, and, as the years went by, we refined the route. This year’s route is illustrated below. 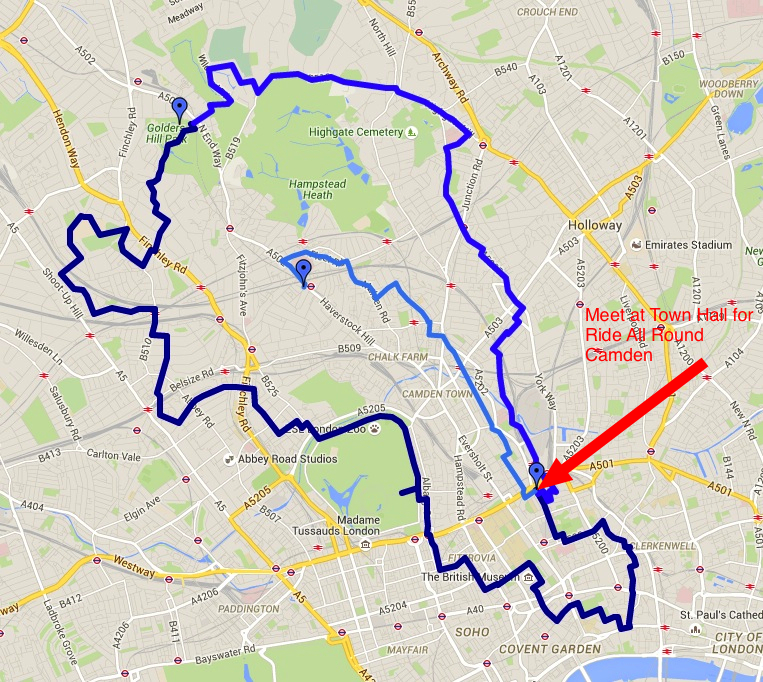 We met as usual in Bidborough Street beside the Town Hall in Judd Street, assembling from 9:30 ready for the 10:30 departure.  Those who turned up early were able to have their bikes checked. Here are a few of the early arrivals: 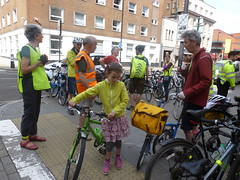 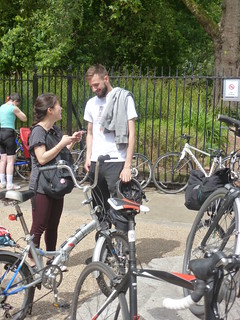 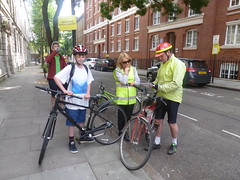 We were fortunate in having very good support from the police: Murat Ozturk and Judith Ryan from the traffic division at Kings Cross and  James Arbuthnot, Luke Davies and Cynthia Zima from Kentish Town – the photo on the left below shows four of them.

As in 2015, John Chamberlain led the ride with Stefano at the back, communicating by radio to confirm that we had all passed the tricky junctions. The ride was supported by four Camden Council cycle trainers: Irina, Mark, Will and Wendy. The middle photo below shows John briefing the marshalls. In the photo on the right John is briefing the riders. 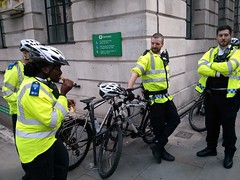 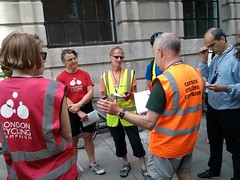 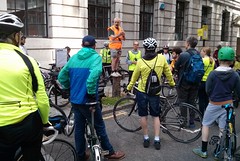 We set off promptly at 10:30 with a total of about 50 riders including several families with children, all of whom managed to complete the circuit. Our council cycling champion Julian Fulbrook was accompanied by a young scout. It was a fine start to the day and the weather remained good all day.

We headed to the Islington border at Phoenix Place, where we turned south. As the lower end of Back Hill was blocked, we went via Eyre Street Hill only joining the cobbles part way up.  As usual, we continued via Hatton Garden and Leather Lane and across High Holborn for a short ride on the border of the City of London. We soon reached Lincoln’s Inn Fields for our first ‘comfort’ stop. 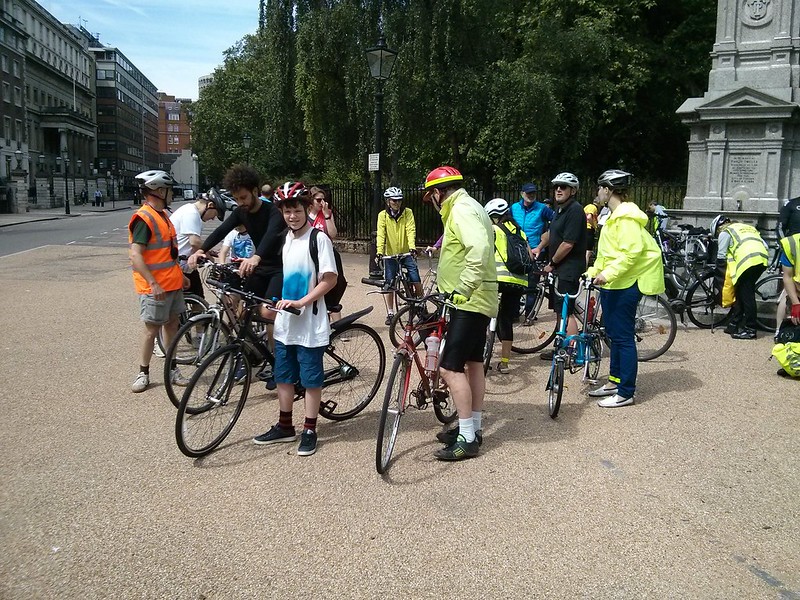 Lincolns Inn Fields with Julian and scout in foreground

For the next part of the ride, we followed the zig-zag line of the border with Westminster, alternately heading north and west. Leaving Lincoln’s Inn Fields,  we set off westwards and, after several changes of lights, we crossed Kingsway onto Great Queen Street then headed up Drury Lane and Museum Street, soon circulating round the British Museum. We then headed across Gower Street and Tottenham Court Road to Charlotte Street – a northbound stage. Howland Street and Bolsover Street took us to Great Portland Street where we crossed the Marylebone Road into Albany Street.

We soon reached Regents Park via Albany Street and Chester Gate for our second stop and plenty of opportunities for coffee and ice cream. We would have liked to take everyone via the Broadwalk, but, after using it for a few years, we were unable to get permission to ride it as a group.  However, we advised the families with children to break ranks and to go that way. 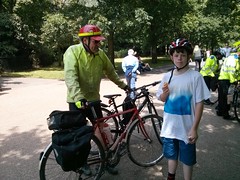 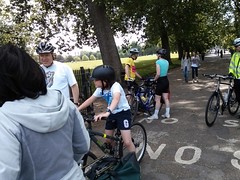 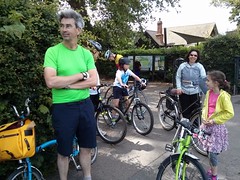 As usual, I stood at the top of the Broadwalk, taking photos of the group as they arrived via the Outer Circle. Google photos has produced a nice animation.

We continued to follow the border of Westminster as far as Boundary Road, where we turned left towards Brent whose border is on Kilburn High Road but we avoided this by following close by via Kilburn Priory, Priory Road, West End Lane, Maygrove Road and Fordwych  Road, where we turned back onto the original route at Minster Road and then went past the playing fields into Hampstead Cemetery where we stopped to fill our water bottles. 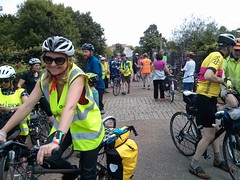 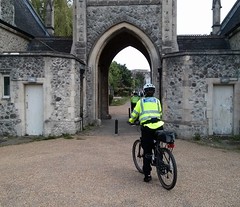 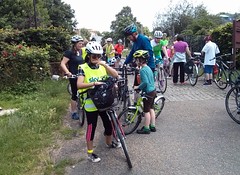 The brief rest gave us the necessary strength to climb the steep hill between Finchley Road and Platts Lane, relieved to enter the rural-seeming Sandy Lane and finally to reach our lunch stop in Golders Hill Park by about 1:15 pm. Thanks to John’s timing, we all arrived together and the weaker riders had just as long for the picnic stop as the stronger ones. 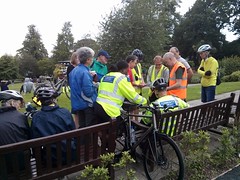 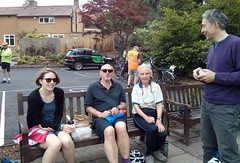 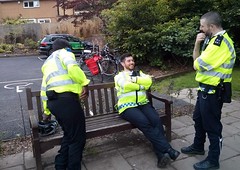 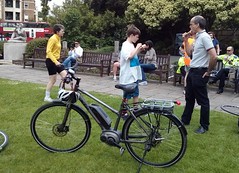 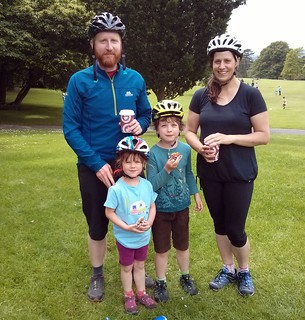 It was great to be able to sit around in the park enjoying the company of the other participants. The count out on leaving the park was 36 people including one who had just joined us.

Around 2:15 we set off for the mainly downhill return: first we went round the Heath extension, then along a short stretch of Hampstead Lane with a funny little detour via Stormont Avenue to avoid some road works. For the first time, we went to Highgate High Street via The Grove and South Grove so as to avoid the little roundabout by the Gatehouse.

We had a long run down Highgate Hill, Magdala Avenue, Dartmouth Park Hill and Brecknock Road. We avoided most of York Way by using Cliff Villas and Camden Square to reach the Agar-Camley link. Then we ran down Camley Street, between St Pancras and Kings Cross stations and round the Argyle Square area back to the Town Hall. 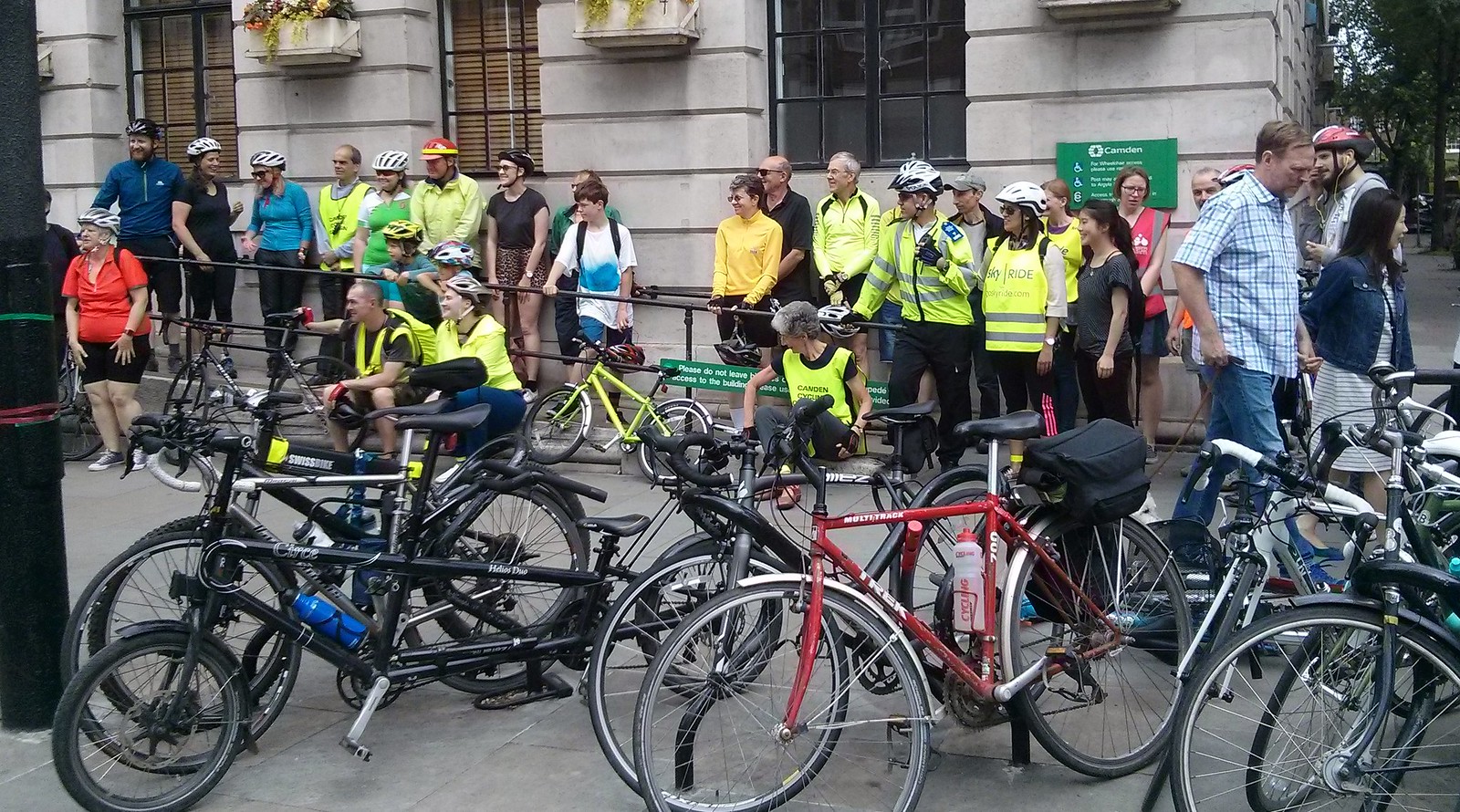 At the end of the circuit – Judd Street Town Hall

Before heading up the centre we said ‘goodbye’ to our police escort, thanking them for their help; as usual, their  presence appears to have a considerable calming effect on the other road users. We also we said ‘goodbye’ to the cycle trainers who had marshalled us all with great energy throughout the ride and a few others (Mark kindly accompanied us most of the way up to Gospel Oak).

The last stage heads up Royal College Street whose new stepped tracks go all the way to Kentish Town Road. Then over to Castlehaven Road and past the swimming pool, through Queens Crescent Market and on up Malden Road. We followed a new short cut behind the Royal Free Hospital, bypassing Pond Street, finally reaching Hampstead Old Town Hall at about 4pm.

See the map of the route on Google maps