This post shows how to reduce rat running in Judd Street and Hunter Street and hence reduce the domination by motor vehicle traffic.

Judd Street and Hunter Street have been dominated by motor vehicle traffic in recent years. A count in September 2015 found over 7000 motor vehicles in one day on both the northern and southern sides of the junction with Tavistock Place (i.e. between Leigh Street and Handel Street). LCC has adopted a policy that for a road to be suitable for shared use by people on bikes and by motor vehicles, there should be fewer than  2000 motor vehicles per day (or 200 per hour) [LCC AGM 2013. Motion 3].

On most days, long queues of motor vehicles are seen in both Judd Street and Hunter Street. This has been associated with the Tavistock Place trial in which Tavistock Place became one-way eastbound to make room for the new uni-directional cycle tracks. But irrespective of the cause, it is very important to prevent motor vehicle congestion. It’s bad for residents and for everyone else who uses the street, particularly if they walk or cycle.

The term rat-running is used to refer to drivers using secondary roads or residential side streets instead of nearby main roads when crossing an area such as the eastern section of Bloomsbury. They may choose to do so to avoid traffic signals or congestion on main roads, for example, in our case, Euston Road. (Driving to an address in the area or starting a journey from an address within the area is not described as rat running).  In order to discuss the problems around Judd Street and Hunter Street we need an enclosing cell and I have chosen one with Guilford Street as the southern boundary although ideally, this might be further south. The cell boundary is shown in blue in Map 1 below. Existing road closures are shown as short black lines: many can be seen in the area around Argyle Square which was freed from through motor traffic over ten years ago by a combination of one-ways and road closures. All of those road closures and most of the one-ways are permeable to people on bikes. The one-way eastbound of the Tavistock Place trial is shown with a red dotted line. 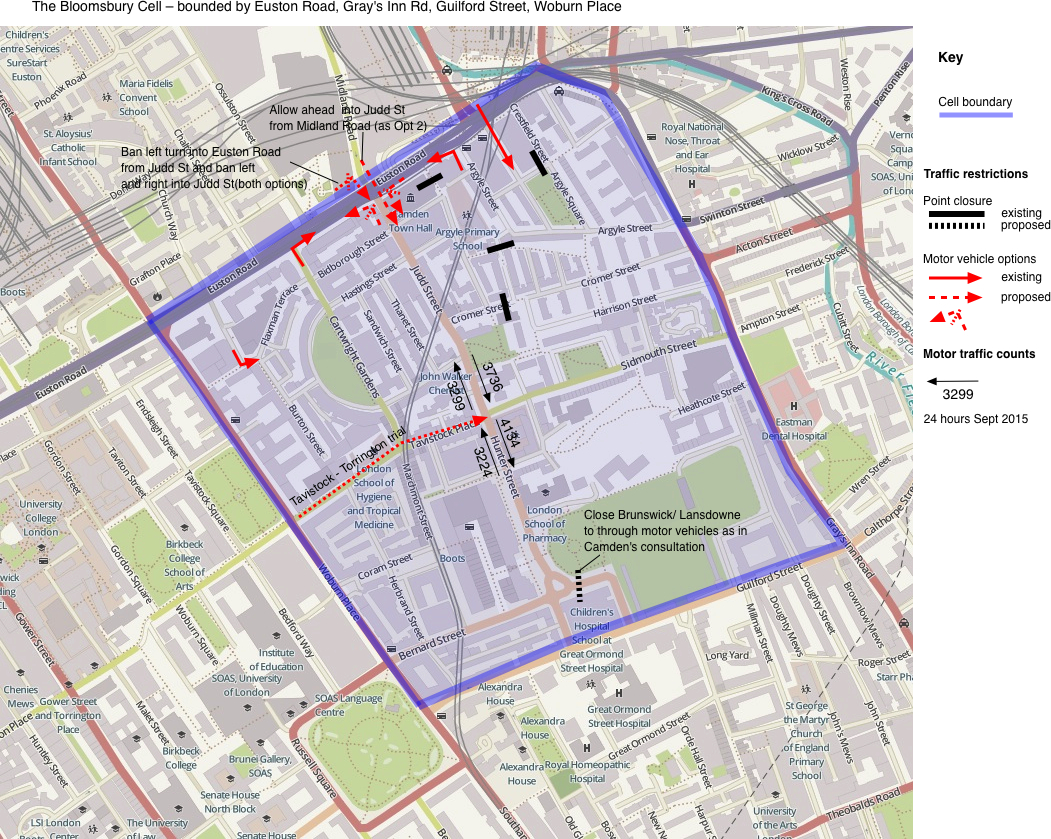 Early in 2016, Camden Council consulted on two schemes, both of which had the potential to reduce rat-running through Judd Street and Hunter Street.

The Brunswick Square consultation described on Camden Council’s website proposed the closure of Lansdowne Terrace at its junction with Brunswick Square. This is shown on the above map by a short dashed black line. This closure would prevent northbound motor traffic from entering the cell (and heading up Hunter Street) from the southern boundary on Guilford Street.

The Midland Road consultation described on Camden Council’s website was designed to enable people using the two-way protected cycle route on Pancras Road to travel in both directions on Midland Road and to cross safely over Euston Road into Judd Street. To allow for a protected cycle crossing and to reduce motor vehicle flow in Judd Street and Hunter Street, the following restrictions were proposed at the junction of Judd Street and Euston Road:

The above map shows with red dashed lines the turn restrictions on Judd St at Euston Road; as well as the option of southbound motor traffic from Midland Road into Judd Street.

Driving into the area with the above filtering

To simplify the following discussion the term ‘filtering’ is used to refer to measures like the above road closures, banned turns and one-ways.

The initial reaction from some of the people living inside an area to proposals for filtering measures is that they won’t be able to get to or from their homes or businesses in their cars or by taxi.  This is not a problem for people living in the many areas throughout Camden that have been freed of rat-running. Nor need it be a problem for those living in and around Judd Street as is illustrated in Map 2 below. 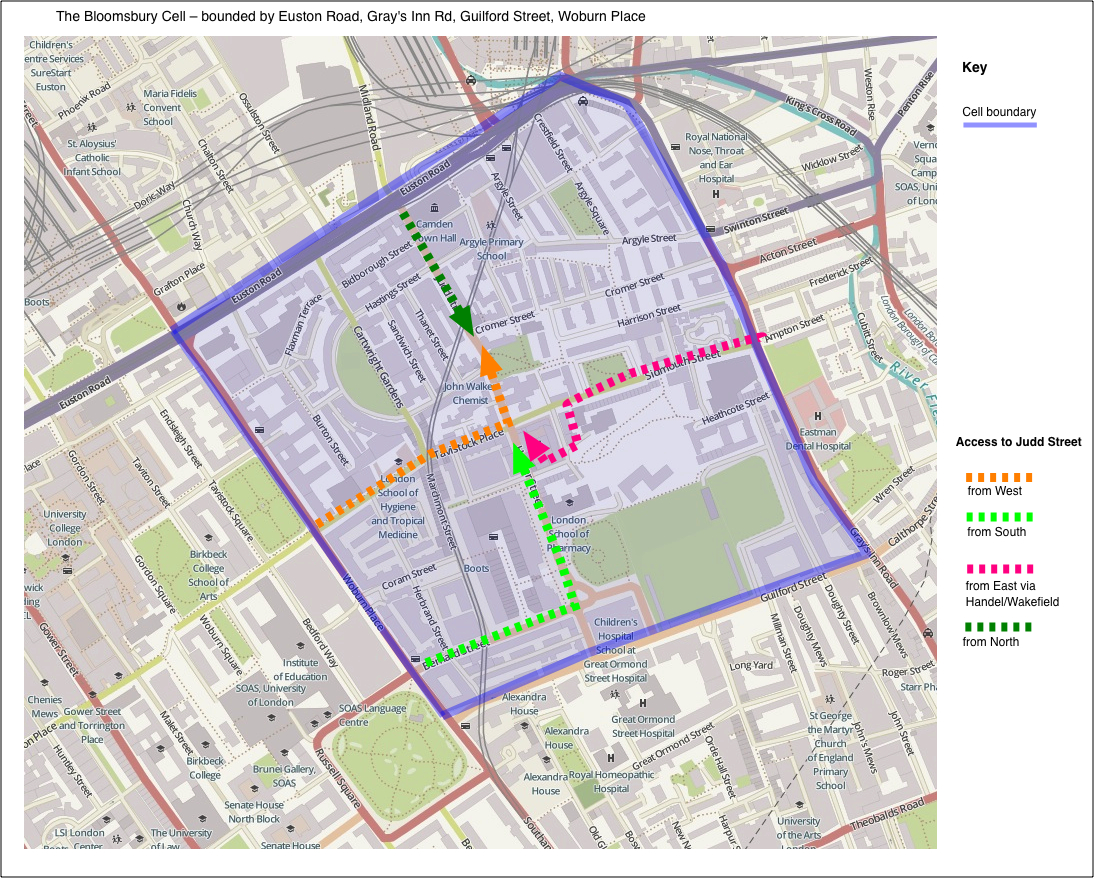 The inbound routes are:

Driving out of the area with the above filtering

Map 3 below shows that it will be possible to make journeys by car or taxi in all directions from the area around Judd Street. 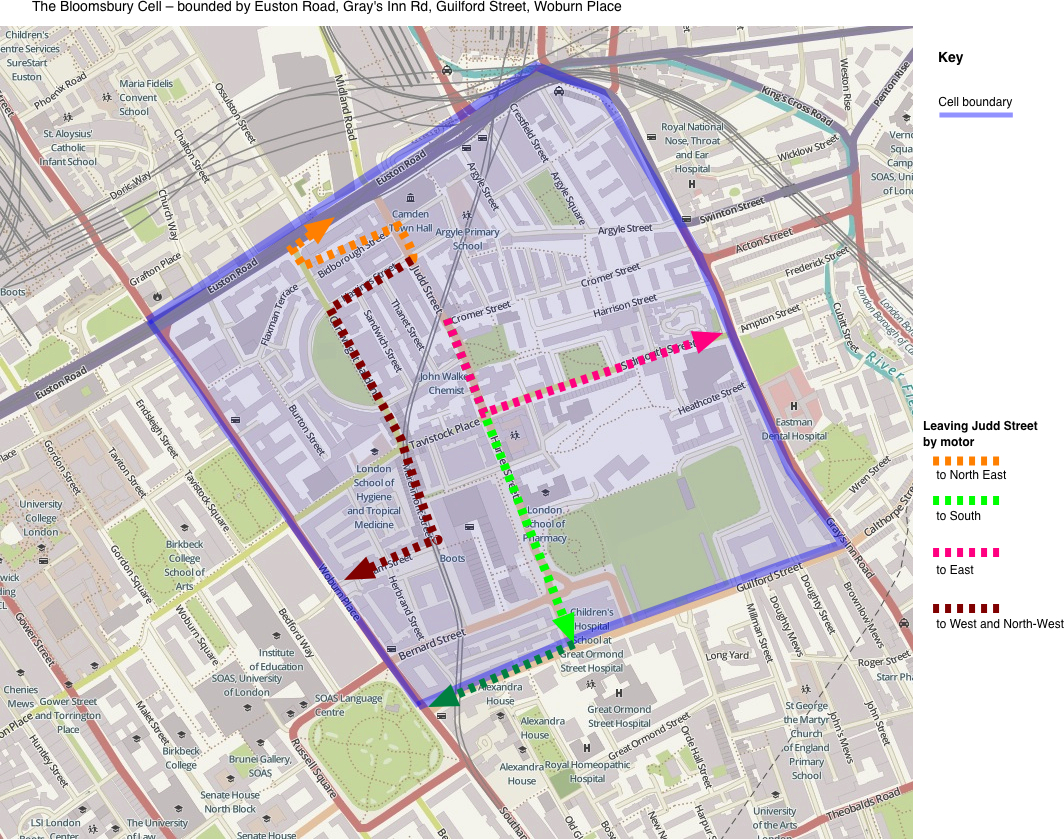 The outbound routes are:

Conclusion on filtering in the Bloomsbury Cell

The measures on trial in Tavistock Place, together with those proposed in the Brunswick Square and Midland Road consultations should substantially reduce the volume of motor vehicle traffic in the portion of the Bloomsbury Cell outside the already privileged Argyle Square area. This will benefit residents and all of those who travel into the area to work and to study. It will also leave residents free to use a taxi or their car when they need to make journeys in and out of the area.  Usually such changes result in more people walking or cycling instead of using motor transport and hence motor traffic levels drop still further.