Camden is making progress on Healthy School Streets where a short section near the school gates is closed to motor traffic for the hours when pupils arrive and leave.

Talk by Ben Knowles on the trial at St Joseph’s school, 16th January 2017 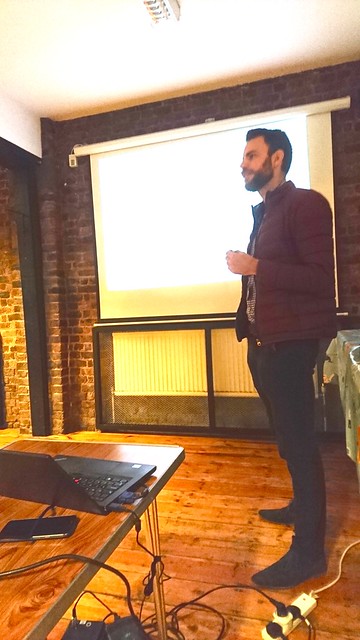 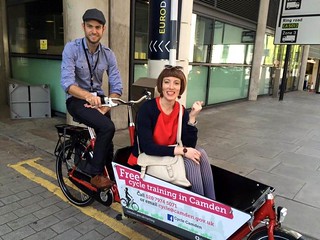 Ben Knowles is Camden Council’s Cycle to Schools Officer. He spoke to us about Camden’s first pilot Healthy School Street that is now in place outside St Joseph’s School (in Macklin Street).

As an introduction, Ben told us that he had been working with schools in Somers Town on a project to increase cycling; that he encouraged Camden to use stepped tracks that he’d seen on a visit to Copenhagen; and that he had been to Utrecht and Amsterdam (primarily personally funded, although TfL paid for the Eurostar!) to discuss a variety of topics around improving walking and cycling, and the idea of closing streets with schools at arrival and departure times had come from this trip. Camden then obtained funding from TfL for a pilot at three schools.

In the past, Ben had been a Sustrans BikeIt officer and had perceived parents driving cars as a significant barrier to children travelling to and from school and that the maximum benefit could be obtained by keeping cars away from the area close to a school. Children need to be enabled to walk or cycle to school, should they wish to (which most do) – in Camden 37% of year 6 children are overweight or obese and exercise on the way to school is an obvious way to increase physical activity. Ben considered the following options for improving safety near to a school:

Schools can use the  STARS schools planning system to record walking, cycling and scooting events and to receive awards (including funding) and report school travel related issues to Camden. Schools interested in working with us to boost levels of walking and cycling, and improve safety on the streets around their school should contact Ben’s colleague, Michelle Jamieson (michelle.jamieson@camden.gov.uk). Feel free to pass these details on to schools!

Is designed to bring the benefits of filtered permeability to schools at the start and end of the school day in locations where a full time closure is difficult to implement.

This is a holistic solution that changes a street in combination with a behavior change intervention with the school and as a result changes travel patterns.

St Joseph’s school is on Macklin Street  a one-way street between Drury lane and Newton Street. 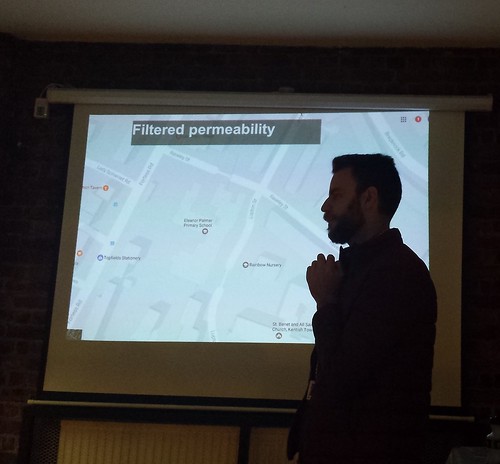 A very simple measure was taken: to close Macklin Street at its entry on Drury lane. The closure is achieved by means of moveable bollards that are put in place by the school between 8:30 and 9:15 am and between 3:15 and 4pm on school days. These are backed up by signage on entry to the street.

Ben noted that closure is simpler with a one-way street – with two-way traffic you need to close both ends and there is a risk of a vehicle getting trapped inside. However, in many cases it should be possible to make the road one-way in order to facilitate this change.

Although it is early days, and the data should be considered indicative, it appears that from initial engagement with behavior change to immediately before the closure went in, driven trips to school fell from 13% to 9%. It appears that following the closure going in, driven trips to school fell further to 4.5% (although this was by a different measurement methodology – we should have more complete and comparable data in June/July 2017).

This indicates a dramatic fall in driven trips to school – if that data is representative then by at least 2/3 (there will likely be a further fall in driven trips recorded to school in the summer, when the baseline data was collected). That means, in this case, some 40 less driven trips every morning and every afternoon – a significant reduction benefiting children, parents and residents alike.

80% residents were in favour before the trial and their support is expected when they are consulted on making it permanent, judging from reactions of informal conversations on the street.

A long discussion followed; it included the following points:

We all appreciated Ben’s talk and the discussion that followed.