Talk by Rachel Aldred at our 19th February meeting 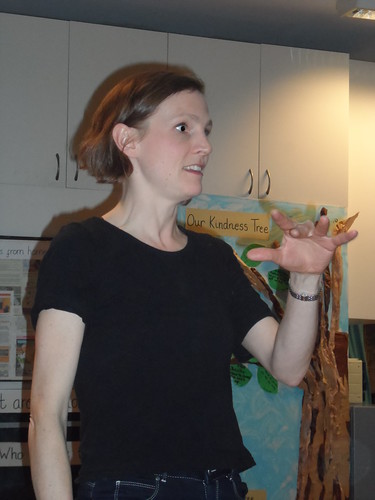 Rachel Aldred ( Reader in Transport, University of Westminster) spoke to us about her new research on cycling injury risk in London. She used a large aggregate data set from TfL and looked at the risk per cyclist or per km cycled rather than concentrating on particular locations.

TfL’s Cynemon (Cycle Network Model for London) has been developed by TfL. Cynemon is based on  a variety of data sources including census data, cycle counts and surveys, and data from Santander Cycles. 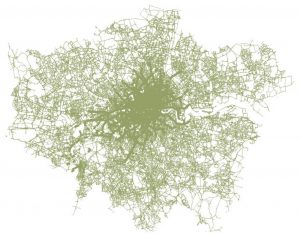 It uses an algorithm to determine the likely route of cycle trips along the networks of streets across Greater London, based on their origins and destinations made between 08:00 and 09:00 on an average weekday morning in autumn 2014. Rachel showed us a plot produced by Cynemon – see the image on the right which can be enlarged by clicking.

Rachel then told us about a new approach to the study of risk:  a case control study that uses the  Cynemon data to identify 6,046 control sites across the network and compares  these with 6,244 injury points from Stats19 (police data of road accidents in Great Britain), also weekday 7am-7pm, 2013-4. The injury and control points were mapped onto data from other sources on speed limits, road classification, borough boundaries bus lanes, index of deprivation (IMD), location at an intersection (i.e. a junction).

Rachel then showed us a variety of outputs 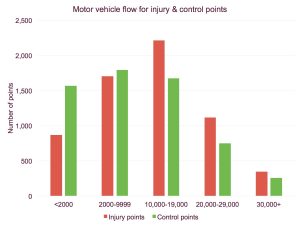 Rachel then outlined  a 3-stage modelling process in which the number of injury and control points were mapped against the following different sets of the available data:

The results for intersections  were as we might have expected, with intersections having over three times the proportion of injury points to control points when compared with places where there is no intersection.

Rachel concluded with some policy suggestions that included that the analysis supports:

After thanking Rachel, we continued with informal discussions until we had to vacate the room at 9:30