Camden Council have won funding to remove the gyratory and make much better use of the surrounding streets.

We are very pleased to hear that Camden has been awarded substantial founding for work on a Liveable Neighbourhood in Holborn.

The scheme proposes the following:

These are shown on the map below (via Camden Council) A freight reduction scheme will be delivered in partnership with the local Business Improvement District, BeeMidtown, who will also be closely involved, along with other partners in the development of the project.

The Holborn area is currently dominated by a highly traffic-congested and polluted gyratory and main road network, and suffers from high numbers of collisions, inadequate footway space and poor cycling facilities. This ambitious project will seek to remove the gyratory, reduce severance, significantly improve the public realm and introduce protected cycle lanes along High Holborn and Theobalds Road. Sections of New Oxford Street and Great Russell Street are proposed to be closed to motor vehicles and a section of Bloomsbury Way is proposed for buses and cycles only. Plans to pedestrianise Great Russell Street would dramatically improve the setting for the British Museum, and an enhanced pedestrian environment around Holborn station will deliver a much improved gateway to the area. A freight reduction scheme will be delivered in partnership with the local Business Improvement District, BeeMidtown, who will also be closely involved, along with other partners in the development of the project 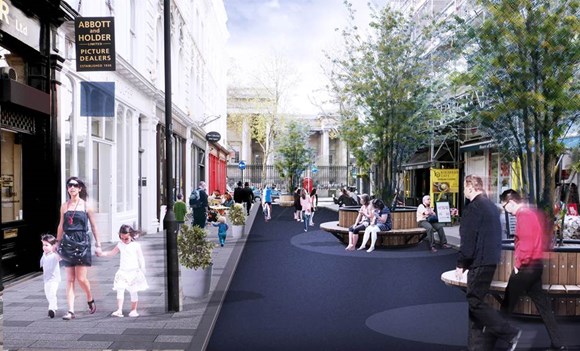 Camden council has successfully bid to Transport for London’s (TfL) Liveable Neighbourhoods programme for up to £9.48m funding to improve the environment for pedestrians and cyclists in the Holborn area, as well as creating an enhanced public realm and access to public transport.

Together with other match-funding sources, the total package of works will amount to at least £12.5m.

A £12.5m scheme that will include the removal of the Holborn gyratory and the pedestrianisation of part of New Oxford Street and a street in front of the British Museum was announced by City Hall today.

The project is one of 11 “livable neighbourhood” schemes to share in £53.4 million from Mayor Sadiq Khan to reduce car use and improve air quality and the environment.