A family ride to explore the new cycle infrastructure while enjoying a view of the Tower and a tea break in St James Park.

Ten adults and six children met at 2pm in College Gardens.  Here’s a photo of the line up (the tenth adult joined us outside the gate). Click on any of the photos to see an enlargement

We set off down Royal College Street and soon reached Pancras Road and the new route on Midland Road. We used the new cycle crossing over Euston Road, entering Judd Street which is almost traffic free since it was closed at the top. At Tavistock Place, we turned left, following the CS6 signs via Phoenix Place and Ray Street where we crossed onto the southbound track on Farringdon Road. After passing Farringdon Station and going under Holborn Viaduct, we reached the point where people have to cross over Farringdon Road and join the two-way cycle track built in the first phase of CS6. We quickly reached the river and rode to the top of Blackfriars Bridge where we looked at the views.

We all turned around and went back to the north bank of the Thames and in order to turn to the east, we turned west for a few hundred yards and then did a U-turn and soon plunged into the tunnel under the bridge approach. First, we headed east towards Tower Hill, via a service road, and onto Upper Thames Street passing Southwark Bridge and London Bridge: this section of the road is rather noisy as it is close to the motor traffic. From Lower Thames Street, we quickly reached Tower Hill Gardens, our first stop – not a tea stop but one of the children passed cupcakes to all of us. Thank you to whoever made them! They were very welcome.
The adults stood chatting while the children found a merchant navy memorial which for some reason seemed to amuse them.  It seems that the cycling was not sufficiently vigorous to damp their natural exuberance.

Leaving Tower Hill Gardens, we turned around again and headed back along the Embankment route, continuing as far as Westminster Bridge where we turned right along Bridge Street, past a strangely packaged Big Ben and into Birdcage Walk. When we reached the Palace, turned right around and rode back down the Mall.  About halfway down we went into St James Park, stopping near to the big café for the real tea break. We left St James Park at about 4:30 pm, rode back along the Embankment to Blackfriars Road and then on CS3 on Farringdon Road as far a Greville Street where the northbound route is on minor roads (TfL couldn’t spare space on Farringdon Road). We soon passed Midland Road at about 5:10 and the adults were angry to see a selfish driver had parked right on the cycle track. Then by about 5:20 we had all arrived back in College Gardens. These photos show that even the children were still feeling good…certainly not at all tired after having ridden about 14 miles.

A map of the route

The total distance was almost 14 miles. You can use the red slider on the left to follow the route on the map.

You can look through the full set of photos here: 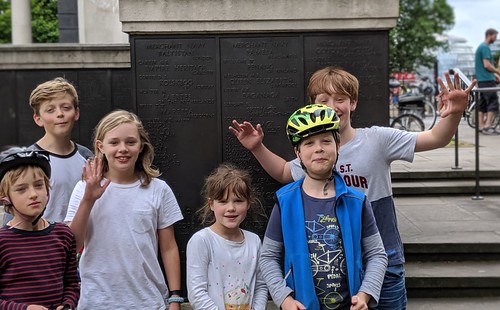