The planters that looked so lovely when they were installed in summer 2013 have taken a battering over the years due to the bad aim of people driving motor vehicles up Royal College Street. So Camden decided to replace them with granite kerbs, see below for a description of the scheme.

The works started on 8th July and are expected to be completed by 16th August 2019.  From about 10th August, all of the granite kerbs were in place and both north and southbound tracks had been reopened.

We expect no further diversions although some work is still outstanding: installation of bollards and painting of double yellow lines and blips. 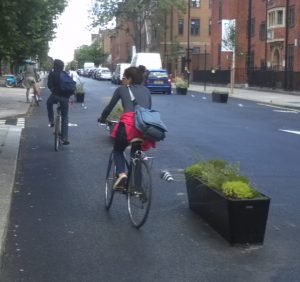 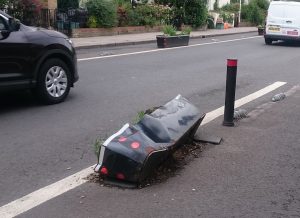 The first photo shows how the planters looked when they were installed in summer 2013. But over the years they have been regularly pushed off their support plates and worse. It is worrying to think that motor vehicle drivers have such a poor judgment of their distance from obstacles.

The white lines were painted and protective bollards installed outside the planters in 2015 to give them better protection. But even white lines seem to have failed to help drivers to steer a straight course.

Granite kerbs instead of planters 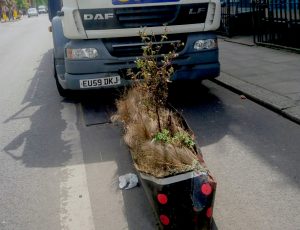 The granite kerbs are to be the same as the ones in use in Midland Road at the top end of the southbound track. That is they are to be 300 mm wide and with about 80 mm upstand.  The ends will be tapered.

They are deployed all of the way up the northbound track from Crowndale Road to Baynes Street, replacing both the planters and the armadillos. Gaps will, of course, be left by the road junctions, the bus stops and the zebra crossings. The section between Pratt Street and Georgiana Street will be left as it is until the everlasting electrical works are complete.

Most of the southbound contraflow track is behind the parked cars. This part will be left as it is. Granite kerbs are installed in the other parts e.g. south of Baynes Street, opposite the electrical works and on the approach to Crowndale Road.

It is now seven years since the planters were put in

The upgrade of the southern section of Royal College Street was completed in September 2013. The former two-way cycle track on the west side was replaced by a pair of tracks, one on each side of the road.