Hangzhou, China is the only non-European city in the top 10 places to be a cyclist. In many cities, commuting by bike is a labour of love. Dealing with often-congested roads, traffic hazards and the threat of a sudden downpour can make cycling a challenging way to get around. But a recent study shows that… [Read More]

Hangzhou, China is the only non-European city in the top 10 places to be a cyclist.

In many cities, commuting by bike is a labour of love. Dealing with often-congested roads, traffic hazards and the threat of a sudden downpour can make cycling a challenging way to get around.

But a recent study shows that some cities are better suited to a life behind bars – handlebars, that is – than others.

Utrecht in the Netherlands topped a list of 90 cities around the globe to be the best place to be a cyclist, according to insurance technology start-up Coya’s Bicycles Cities Index for 2019. More than half of the city’s residents regularly take to two wheels, benefiting from low accident rates and relatively few bike thefts.

Authorities have transformed the Dutch city into a bike-friendly haven, investing in infrastructure to encourage citizens to adopt pedal power. A network of both covered and open air cycle paths link different parts of the city, complete with specially designed bridges, subways and roundabouts just for cyclists.

The network includes the country’s longest dedicated bicycle street and boasts the world’s biggest two-wheel parking lot, which the city says will be able to accommodate 33,000 bikes by 2020. 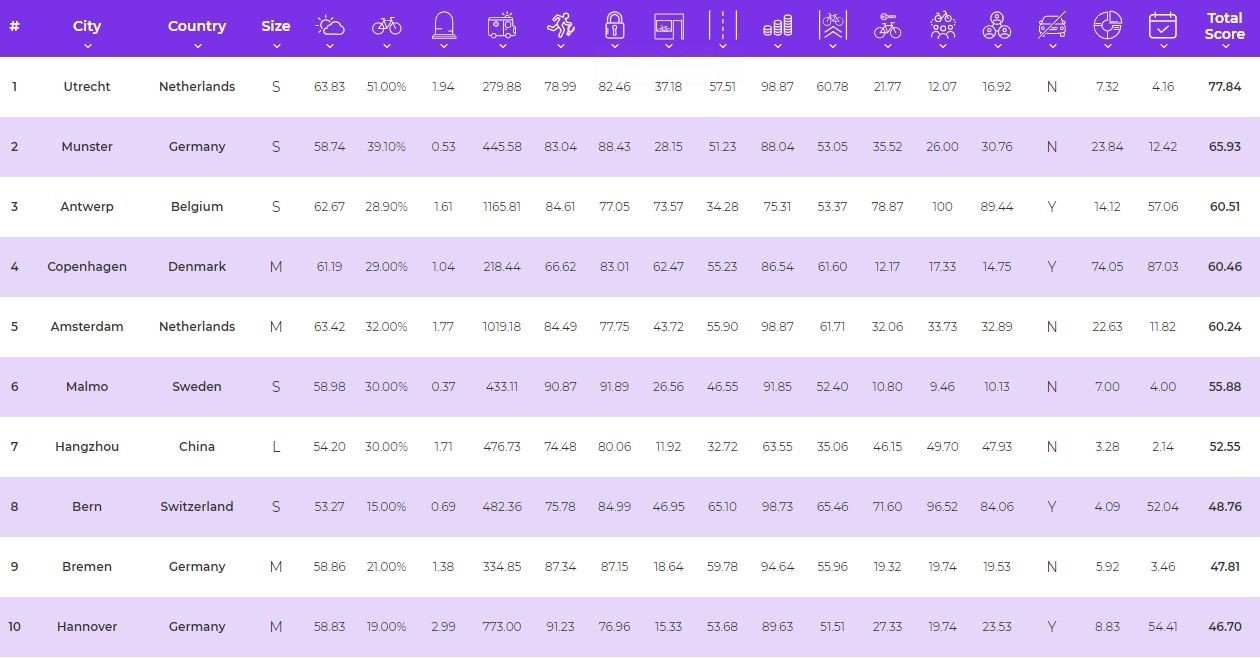 The world’s top 10 cities to be a cyclist.
Image: Coya
Safety in numbers

The survey examined a number of factors that affect cyclists, including crime and safety, infrastructure, bike sharing opportunities and special events in cities, such as no-car days.

European cities dominate the top 10, with Hangzhou, China the only exception.

Cities like Munster, Germany, which came in second place, have invested in dedicated infrastructure to encourage bike use and allow people to ride more safely, resulting in almost two-fifths of the city’s population regularly travelling by bike.

This figure drops to around 30% for the other top-5 cities, which include Antwerp, Copenhagen and Amsterdam.

As the above chart shows, increasing the number of cyclists in a city can lead to fewer fatalities. A recent OECD Cycle Safety report found enhanced levels of awareness in places with a high number of cyclists, bike paths and other supporting infrastructure.

But there are exceptions. In the US, bike deaths have risen in line with an increase in bicycle commuters. The report concludes it takes time for both motorists and cyclists to adapt to an spike in bike use, which could result in a short-term rise in accidents before awareness increases.

Cities that separate cyclists from road vehicles by investing in protected cycle paths are best placed to maximize the health and sustainability benefits of cycling, according to the OECD.

While safety levels for cyclists differ dramatically between countries and cities, research shows that in general the public health benefits of encouraging people to climb into the saddle far outweigh the costs. Many more people die of chronic diseases related to lack of physical exercise and poor air quality than in road accidents.

And it’s not just the health of riders that improves when cities promote bikes as a means of transport. Pedal power produces zero carbon emissions, in a boost to the environment. United Nations figures predict the global population will reach 9.8 billion by 2050, with 68% of those people set to be city dwellers.

So encouraging the use of emissions-free transport like bicycles isn’t just good for us, it’s good for the planet, too.