This is a scheme to build a westbound segregated cycle lane on Prince of Wales Road (PoW). A short section at the western end is a 2-m wide stepped track. For the rest of the road, where the lane is behind parked cars, the original design had a 1.5m stepped track and a 0.5 m buffer behind the parked cars but we agreed with Camden officers that it would be better to use the full 2m for the cycle lane which would be at road level.

The work at the junction with Haverstock Hill appears to be complete while the westbound cycle track is fully open from the west of the Crogsland Road bus stop. In this section, there are two junctions with continuous footways, a pedestrian and cycle crossing to Queen’s Crescent, a bus stop bypass, an informal pedestrian crossing and a zebra crossing. The new work at the junction with Malden Road is well underway. 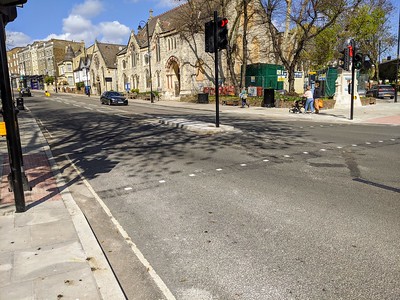 Fig A: Looking up Haverstock Hill 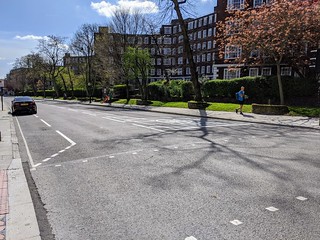 Fig B: Looking down Haverstock Hill towards Chalk Farm

We start by showing a section of Haverstock Hill at its junction with Prince of Wales Road. Although this scheme doesn’t include any cycling-specific features on Haverstock Hill, some work has been done in preparation for a possible future scheme for segregated cycling here.

Figure A shows the view up Haverstock Hill and if you enlarge the photo you will be able to see that the central refuge island has been moved eastward to equalise the widths of the traffic lanes and make room for future cycle tracks on both sides of Haverstock Hill.

Figure B shows the view down Haverstock Hill towards Chalk Farm. It is disappointing to see the new southbound cycle lane on Haverstock Hill is advisory  – which, as could be predicted, has been parked on. We are however optimistic that when the new Chalk Farm Road route is developed, the advisory lane will be replaced by a protected mandatory lane. 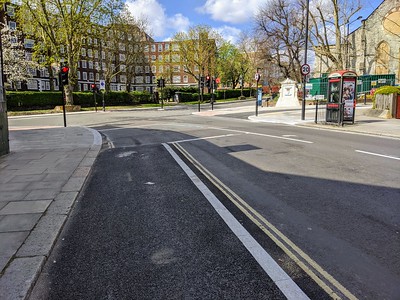 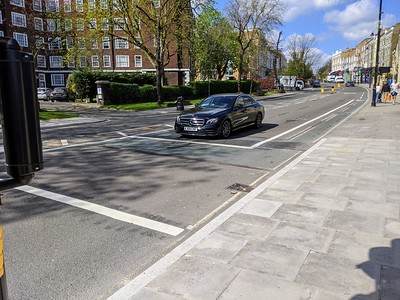 Figure D: Looking back down PoW

Figure C shows the westbound cycle track approaching Haverstock Hill: this part of the track is stepped and the ASL box has been enlarged but the logo hasn’t yet been painted. The kerb has been built out, making the crossing shorter for pedestrians. 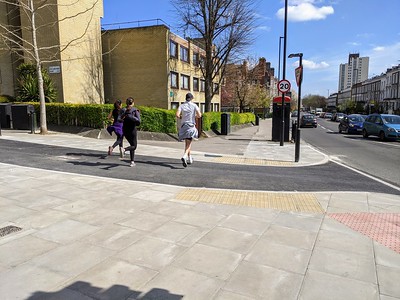 Figure E shows the entry to Maitland Park Road. This has been raised to footway level although the tarmac surface has been retained.

Figure F shows the original proposal which would have allowed cycles coming down Haverstock Hill to cut the corner via Maitland Park Road. This would have had two benefits for people who cycle: i. not having to wait for a green signal and ii. separation from motor vehicles turning left into Prince of Wales Road. However, at consultation time, there was strong opposition to this proposal on the grounds that the shortcut for cycles would cross the pedestrian desire line. As a result, this proposal has been dropped.

Between Haverstock Hill and Crogsland Road 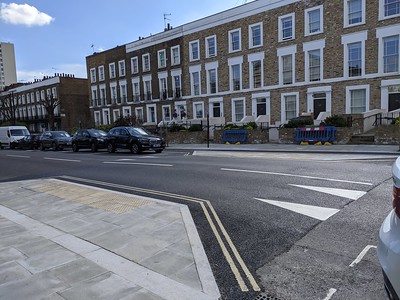 Figure G: Informal pedestrian crossing from north side of PoW 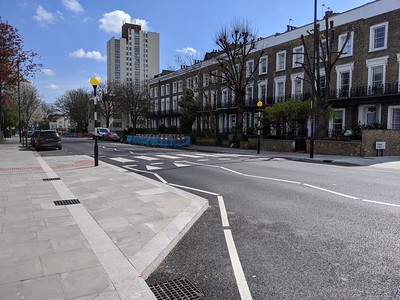 Figure H: Zebra crossing shown from north side of PoW

Figure G shows the raised informal pedestrian crossing which has a build-out on the north side as well as another build out outside the cycle track on the other side of the road. This leaves a distance of about 6 metres for pedestrians to cross in one stage whereas the former crossing at Craddock Street consisted of two 5 metre stages separated by a pedestrian refuge.

Figure H shows the zebra crossing which again has a build-out on the north side while the stripes extend across the road and over the cycle track.

We think that these measures go some way to answering criticisms about the removal of central islands. 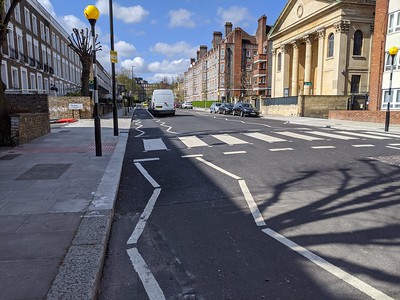 Figure J: The view down the westbound cycle track 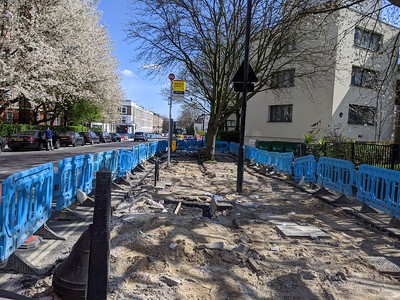 Figure J shows the view down the westbound cycle track from near Crogsland Road to Haverstock Hill. The first part is demarcated only by the zigzag tails of the zebra crossing. After that it runs behind parked cars, finally becoming a stepped track on the section between Queens Crescent and Haverstock Hill.

Figure K shows the site of the former bus stop between Malden Road and Crogsland Road.  It will be reconstructed as a bus stop with the cycle track bypassing it. The footway will include the tree while the cycle track will run just outside that.

This junction has been of concern for many years because it is so wide, meaning that it takes a cyclist or a pedestrian a very long time to cross it.  For example, turning right from Malden Road into Prince of Wales Road has been very hazardous. The work currently in progress is intended to ‘tighten’ the junction by building out the corners and in some cases bringing the stop lines forward. This will benefit pedestrians as well as cyclists and, in addition, the new signals will provide pedestrians with diagonal as well as normal green man crossings.

These photos show the work at three of the four corners (the southeast corner has blue plastic barriers but not much appears to be happening yet). 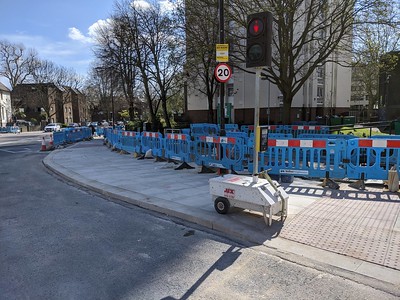 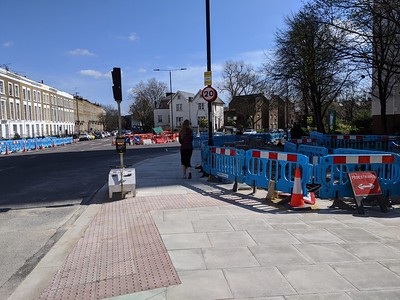 Figures L and M show different views of the southwest corner of the junction (at the top of Malden Crescent), the latter showing the view from Prince of Wales Road west of the junction. It is clear that the footway has been built out extensively. 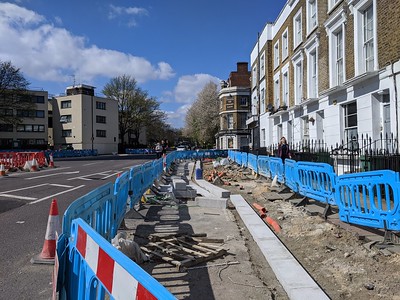 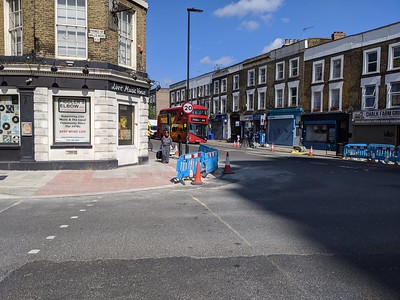 Figure N and P show the northern corners of the junction (where it meets Malden Road).

Figure N shows the approach to the junction from the east and it illustrates the considerable widening to the footway that is being implemented.

The northwest corner has already been built out as shown in Figure P.

In the light of the Covid-19 pandemic it seems likely that this work may stop at some point. But we will make a point of passing this way from time to time on one of our daily exercise walks. This will enable us to report on any further progress.

The work which started at the western end of Prince of Wales Road is now approaching Crogsland Road.

Work is still ongoing at the junction with Haverstock Hill. We will report on that at a later date. 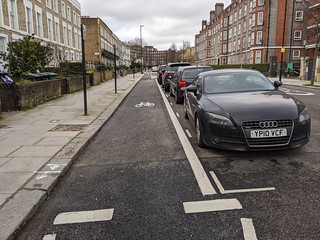 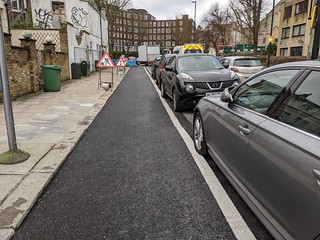 Figure 1 shows the 2-m wide road level cycle lane behind the parked cars which is very clearly delimited by a solid white line.  However, it may be necessary to indicate to people that they shouldn’t cycle too close to the parked cars. At a meeting in Jan 2019, CCC suggested that Camden should visually mark a buffer on the cycle lane. As this is a two-way road, cars parked with-flow will create a greater danger from dooring than on RCS and we still believe a painted buffer zone would be beneficial.

Figure 2 shows the 2-m wide stepped track on the approach to Haverstock Hill, which again is very clearly delimited by a solid white line.

Why have drivers placed their wheels on the edge of the track? Is this to keep out of the way of the extensive road works in the area?

Crossing over PoW at the junction of Queen’s Crescent 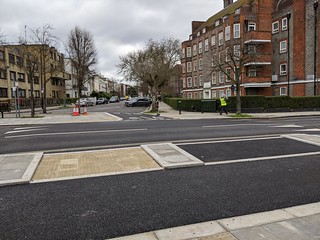 Fig 3: View across to Queen’s Crescent 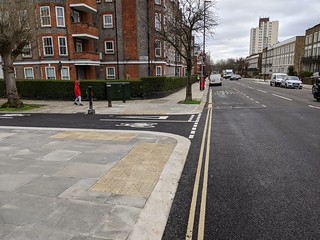 Figure 3 shows the view from the south side of Prince of Wales Road. The pedestrian crossing is in roughly the same place as before but the pedestrian refuge is now placed outside the cycle lane instead of being in the middle of the carriageway. The other gap in the refuge enables people on bikes to cross between the cycle lane and either Queen’s Crescent and or the other side of Prince of Wales Road.

Figure 4 shows a view of the entry to Queen’s Crescent from the north side of Prince of Wales Road. The angle of turn has been improved from the original but it is still quite sharp. According to the drawings, bollards will be installed to prevent motor vehicles from entering. 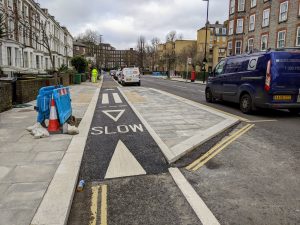 Fig 5: The bypass at the Craddock Street Bus Stop

Figure 5 shows a view from Craddock Street of the first bus-stop bypass to be built for this scheme on Prince of Wales Road. There are three more to come. The Give Way and mini-zebra markings make it very clear where cyclists should wait for pedestrians to cross.  The original bus stop was closer to Haverstock Hill and had no shelter but there would be room for one on that island.

The informal crossing near Craddock Street 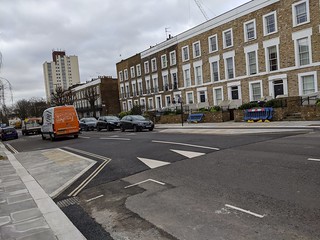 Fig 7: Informal crossing near Craddock Street from north side of PoW 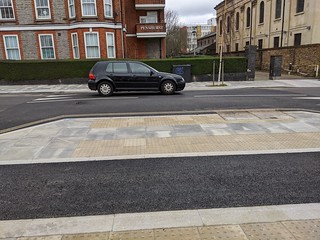 Figure 6 shows a view across the cycle lane and the pedestrian refuge to the north side of PoW.

Figure 7 shows that the crossing is raised and has a build-out on the north side of PoW.

The continuous footways at Truro Street and Craddock junctions 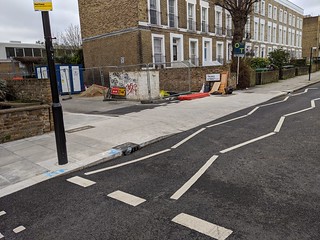 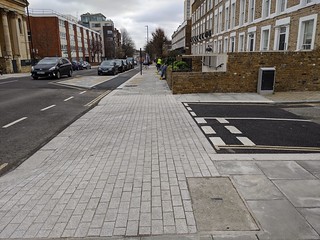 A junction with continuous footway is sometimes called a Copenhagen crossing and is intended to improve conditions for pedestrians by showing drivers they are entering a pedestrian area where they must allow pedestrians to move. The effects are going to be much more significant when applied to other bigger roads e.g. Crogsland Road and Harmood Street. 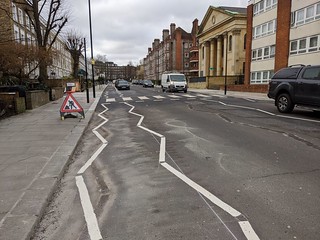 Fig 10: Approach to the zebra crossing by Truro St

The original zebra crossing had a pedestrian refuge in the middle of the road. But the space it occupied is no longer available as the westbound motor vehicle lane has been moved out from the kerb to make way for the cycle lane. Figure 8 shows the view from the Crogsland Road side – at this point, the cycle lane is marked by the zig-zag lines required on the approach to any zebra crossing.

The workers on site seem to be approaching Crogsland Road so it seems likely that they will build a continuous footway there and then start on the major junction improvement at the intersection with Malden Road and Malden Crescent.

Camden tells us that they aim to complete the project by June 2020.

Here’s a link to the original consultation