Between St. Augustine’s Road and Brecknock School in Cliff Villas

Work on this new scheme was completed by 20th June 2020. It provides a new safe walking and cycling route between the Camden Square area and Brecknock Primary School in Cliff Villas via St Augustine’s Road and Camden Park Road. It also provides a short section of segregated cycle track on Camden Park Road including a bus-stop bypass, allowing cycles to pass safely and conveniently when a bus is at the stop. 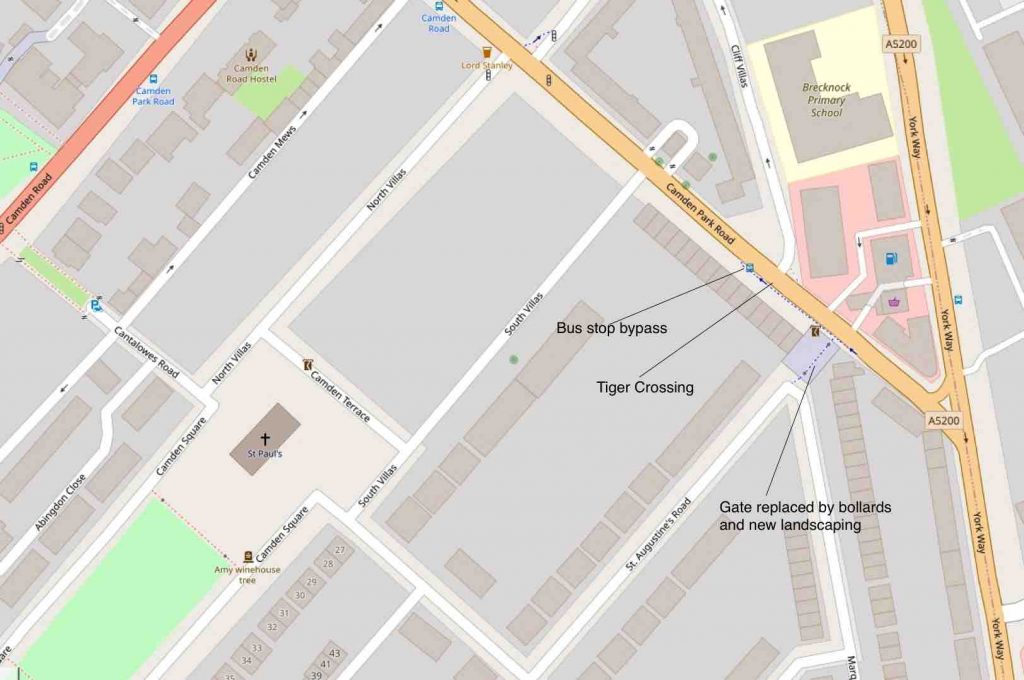 Map showing the location of Brecknock School, the Tiger crossing and other elements of the scheme.

Camden Park Road –Torriano Avenue forms the northbound road of a gyratory that crosses Camden Road. Camden Park Road was a serious barrier to families walking or cycling with their children to Brecknock School. View of Tiger crossing – cycles cross where the logos are painted

Note also that the entrance to Cliff Villas has been reconstructed with a continuous footway across the junction which should encourage drivers to slow down before turning into Cliff Villas. A new ‘two-way cycling’ sign can be seen on the post on the left.

Other elements of the scheme Just north of the junction with Cliff Villas, a bus stop bypass is provided for people continuing up Camden Park Road This provides a one-way cycle track northbound behind the bus boarder. Note that the carriageway has been reduced to a single lane for motor vehicles and when a bus is at the stop, other motor vehicles will have to wait behind it.

An advisory cycle track is marked outside the parked cars as far as the junction with South Villas but no buffer zone is marked.

Before this scheme was built, there were two gates between St Augustine’s Road and Camden Park Road with no dropped kerbs for cycling through. This aspect of this new scheme is on its own is a significant permeability gain. StreetView 2019 showing the gates of the former impermeable road closure This scheme will vastly improve the experience of parents and children walking and cycling to Brecknock School from the Camden Square area. Potential conflict between cycles and pedestrians

We are worried about a potential conflict between people on foot and on bikes who are supposed to cross one-another on a ‘shared space area’ on the footway after using the Tiger crossing.

For example, in the morning, people on foot will cross the zebra and then head for the footway on their right as the school entrance is on that side.; while the people cycling will use the right side of the crossing and the head across the shared space to use the road on their left.

As they are all heading to the same school, we hope that they will cooperate.

Minor snagging issue: there are supposed to be two-way cycling signs on both sides of the road.

Drivers on Camden Park Road turning right into  Cliff Villas may conflict with people cycling out of Cliff Villas. This issue will be solved for school arrival and departure times by the proposed School Street for Brecknock School expected in September.

Our study on barriers that prevent people cycling to school identified Barrier B which is described as “Need protected 2-way cycling on Torriano Avenue and Camden Park Road and a safe crossing over Camden Road”. This barrier affected people living in the Camden Square area travelling to Torriano School and Acland Burghley School.

The reduction to a one-way cycle lane by the bus stop should not be seen as a hindrance to this idea. A two-way track from North Villas, across Camden Road and all the way up Torriano Avenue would remove Barrier B.